Seneca too much for Lady Mustangs 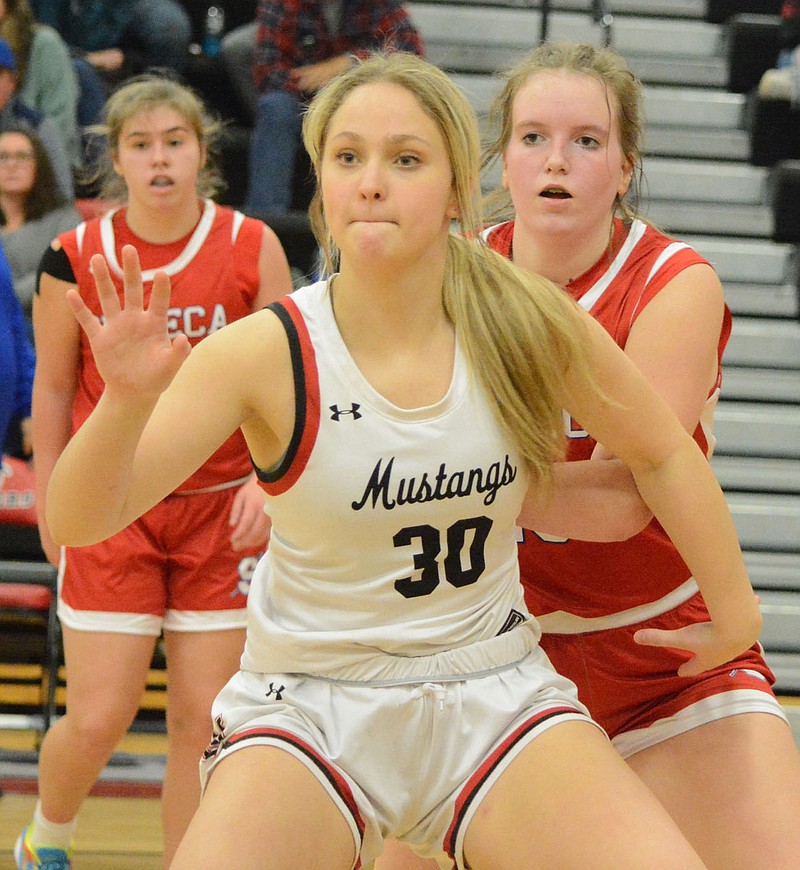 Bennett Horne/McDonald County Press Lady Mustang sophomore Rylee Anderson looks for the ball while posting up in the lane against Seneca during their game on Friday, Jan. 13, at Mustang Arena.

ANDERSON -- Seneca sophomore Hazley Grotjohn scored half of her team's 10 points in the opening quarter while leading the Lady Indians to a 48-39 win over McDonald County on Friday, Jan. 13, at Mustang Arena.

"The deficit shouldn't have been what it was," said McDonald County coach Sean Crane. "We played them earlier this year and beat them by 13. Honestly, it was the little things. We just didn't play as well offensively and that really hurt us, and then the big thing was that our defense was nowhere near as aggressive as we need it to be."

Grotjohn, who hit both a 3- and 2-pointer in the first quarter, finished the game leading all scorers with 20 points, six more than she scored the first time these two teams played this season.

"Katelynn Townsend is out with a foot injury and she held (Grotjohn) to 14 points last time," said Crane. "That would have really changed the game, but it's sports and those things happen."

Seneca outscored McDonald County, 16-11, in the second quarter to gain a 26-18 advantage heading into the halftime break. The Lady Mustangs came out of the intermission to post a 12-9 third quarter but got turned back in the fourth when the Lady Indians put up 13 points to their nine.

"We still had opportunities," Crane said. "We cut it to three late, but we just never could quite get over the hump. We were playing some different people than we did the last time we played them and we just didn't play as well as a team."

"There's going to be nights like this, where things don't go your way," said Crane. "You still want to win on those nights, to find a way to win even when you're not at your best, but it just did not happen tonight."

The McDonald County Lady Mustangs withstood a desperate fourth-quarter rally by the East Newton Lady Patriots to hang on for a 44-43 Big 8 West victory on Thursday, Jan. 12, at Granby.

McDonald County led 33-26 heading into the fourth quarter, only to see East Newton battle back on the strength of a nine-point effort from Brooklyn Blanchard, who hit one 3-pointer in the contest on her way to a game-high 17 points.

But McDonald County's duo of Megan Elwood and Carlee Cooper, who finished with 15 points apiece, combined to score nine points each in the fourth to keep the Lady Patriots at bay.

Cooper hit a 3 and two free throws in the stanza, while Elwood managed a 2 and two charity shots down the stretch as the Lady Mustangs won the fourth to secure the one-point victory.

The Lady Mustangs fell to 5-10 overall with a 46-27 loss at Carthage on Tuesday night.

The Lady Mustangs trailed 33-13 at halftime.

McDonald County will play a makeup game at Adrian on Thursday, Jan. 19. That game was originally scheduled for last month. The Lady Mustangs are also scheduled to play at Cassville on Tuesday, Jan. 24, for a ninth-grade/jayvee/varsity tripleheader beginning at 5 p.m. 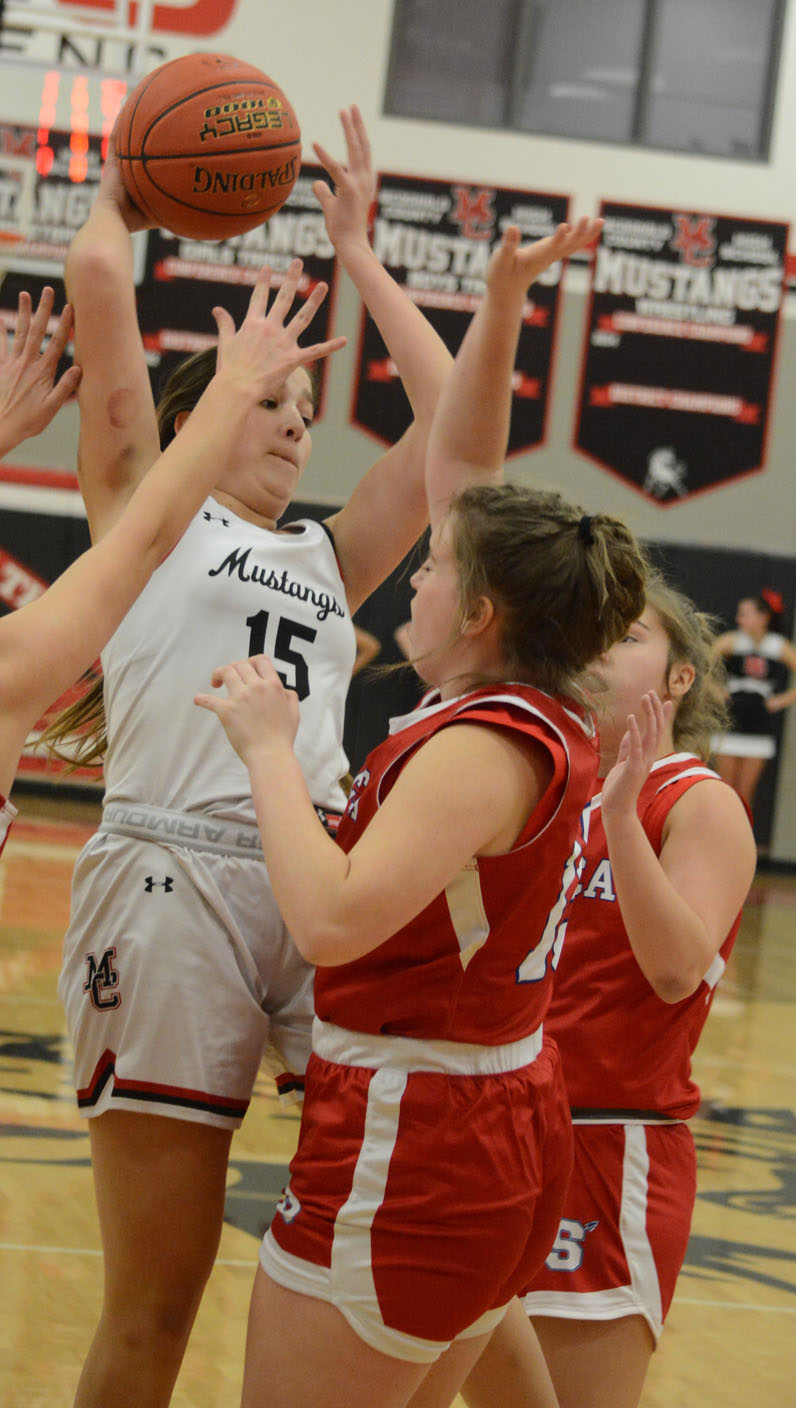 Bennett Horne/McDonald County Press Freshman Carlie Martin dumps a pass down low to a teammate in the lane against a group of Seneca defenders during McDonald County's game on Friday, Jan. 13, at Mustang Arena.

Print Headline: Seneca too much for Lady Mustangs