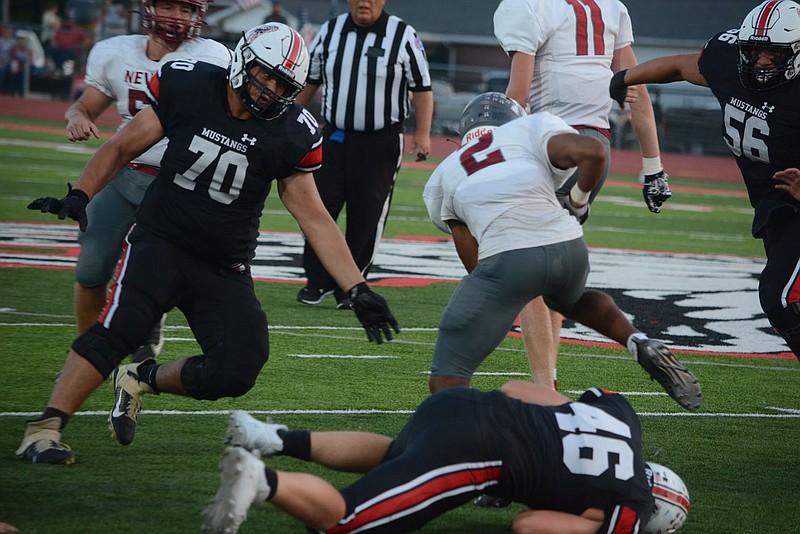 ANDERSON -- The McDonald County Mustangs used some last-minute heroics on offense and defense to take down the Nevada Tigers, 27-26, on Friday, Sept. 16, at Mustang Stadium.

"That's a huge win for our team," said McDonald County coach Kellen Hoover. "It's a really big win against a very good team in the Big 8 West, which is full of really good teams. That's a team that is physical and fast and our hats are off to them. They beat us up a bit. Our kids had to withstand a little bit from them and it wasn't easy. But our kids persevered and we were fortunate to come away with a win."

The Mustangs found themselves trailing, 26-20, when Nevada's Case Sanderson broke free for a 35-yard touchdown run with 2:58 left in the game. His two-point conversion run was stopped short of the goal line by the Mustangs.

Taking over at their own 29-yard line, the Mustangs began their march on the strength of the arm and legs of quarterback Destyn Dowd, who completed an 11-yard pass to Josh Pacheco on second down before reeling off runs of 8, 8 and 6 yards to the Nevada 38.

After an incompletion, Dowd connected again with Pacheco for a completion of 10 yards before running for another 4 to the Tiger 24. Dowd was stopped for no gain on second down and misfired on a pass attempt to Jack Parnell on the next play.

But on the next play, a fourth-and 6 from the 24, the quarterback -- and the rest of the offense, for that matter -- knew what play to call.

"(Senior Cross Dowd) said, 'Hey, when we have this action out there in their coverage I come open.'" Hoover said. "We had Josh sprinting across the field and he held some defenders there on him. It opened up a window for Cross, just like he said. We put a good ball on it and he made the catch even though he knew he was probably going to get hit right after."

Destyn Dowd's pass to his brother, who was wide open in the end zone, was true and the senior made the grab for the go-ahead score with 1:01 left in the game.

"They had to cheat toward Josh's side because he made so many great plays tonight," said Cross Dowd. "He showed everyone he's a ball player."

Destyn Dowd said his older brother "came to the sideline the play before (the touchdown) and said it was wide open. Then I just stared him down ... there was nobody I was going to but him, nobody I trust more."

Hoover credited the offensive players for doing "an awesome job getting out of bounds so we didn't have to use a lot of timeouts," adding, "We we got a few big blocks that let guys get out of bounds."

He continued, "I was really proud of our kids for leading a drive like that when they haven't really been put in that situation before. I was pretty proud of them for that."

Senior kicker Richard Gasca, who missed the point-after try earlier in the quarter that left the scored tied at 20-20, made the most of his second chance to put the Mustangs on top by a single point.

"He's a mentally tough guy and he understands there's going to be another opportunity," Hoover said of his kicker, who is doing double time this fall as a member of the school's football and soccer teams. "When something goes wrong, you just have to know there will be another chance and it will be a big one. Sure enough, he got another chance and it was a really big one that he made."

Nevada then took its shot at some late heroics, firing three straight incompletions from its own 29 before quarterback Cade Beshore connected with Drew Beachler for a first down. Beshore then tried another pass, this one to Avious Steadman, only to see Pacheco leap to intercept the pass at the McDonald County 14 with 0:27.1 left in the game.

"I was just locked on (Steadman) all night," said Pacheco, who also broke up the first pass attempt of the drive. "Everywhere he went to my side of the field I was on him. I saw him run out and I said, 'Oh, that's me,' and I got right on his hip. As soon as I saw the ball in the air I knew it was mine."

Pacheco, who led all receivers in the game with 121 yards on nine catches, caught three for 33 yards in McDonald County's opening drive, which ended in a 9-yard touchdown pass from Destyn Dowd to Isaac Behm. Gasca's PAT was good for a 7-0 McDonald County lead with 3:02 on the clock.

The Tigers missed tying the score when, after a 12-yard run by Steadman with 9:33 left in the first half, the Nevada kicker missed the PAT, leaving the Mustangs in front, 7-6.

The Mustangs answered the score with a 13-play, 75-yard scoring drive capped by a 19-yard touchdown pass from Destyn Dowd to senior Dalton McClain. Gasca's kick was good for a 14-6 McDonald County lead with 0:16.2 left before halftime.

McDonald County drove the ball to the Nevada 24 on the opening series of the second half, but incompletions on third and fourth down gave the ball to the Tigers, who took it back the other way in five plays to knot the score at 14-14.

Jordan Johnson ran the ball in from the Mustang 11 and Beshore took it in for the two-point conversion with 5:49 left in the third.

McDonald County lost the first possession of the fourth quarter on a fumble and Nevada took advantage, driving the ball 44 yards in six plays for the go-head score on a 10-yard run by Johnson. The PAT was no good, leaving the Tigers in front by a 20-14 margin with 7:06 remaining.

The Mustangs bounced right back, driving from their own 37 in five plays with Destyn Dowd finishing it off with a 10-yard carry with 4:34 remaining.

The drive's big play was a 37-yard completion from Destyn Dowd to Pacheco ahead of the quarterback's touchdown run.

Nevada gained its last lead of the night on its next possession when Case Sanderson reeled off a 35-yard run with 2:58 to play. He also carried for the conversion attempt but was stopped at the goal line, leaving the score at 26-20 in favor of the visitors and setting the stage for the home team's exciting finish.

"They were physical up front and were hard to run against," said Hoover. "So we made our own adjustment and went back to Josh a lot and made him a big part of it."

The Mustangs managed 125 yards rushing on 31 carries. Destyn Dowd carried the ball 24 times for 80 yards and one score and Jordan Saylor six times for 30 yards. Parnell collected 15 yards on his lone carry.

Johnson carried the ball 22 times for 180 yards in leading the Tigers, who finished with 335 yards rushing on 45 carries.

Beshore completed three of his 10 pass attempts for 31 yards.

The win was the third in a row for the Mustangs after dropping their season opener.

Destyn Dowd said, "We're never going down without a fight."

Friday night the Mustangs travel to Cassville for a 7 p.m. kickoff. The Wildcats opened the season with a 42-14 win over Aurora, a 42-7 loss to Seneca and a 35-0 win at East Newton. 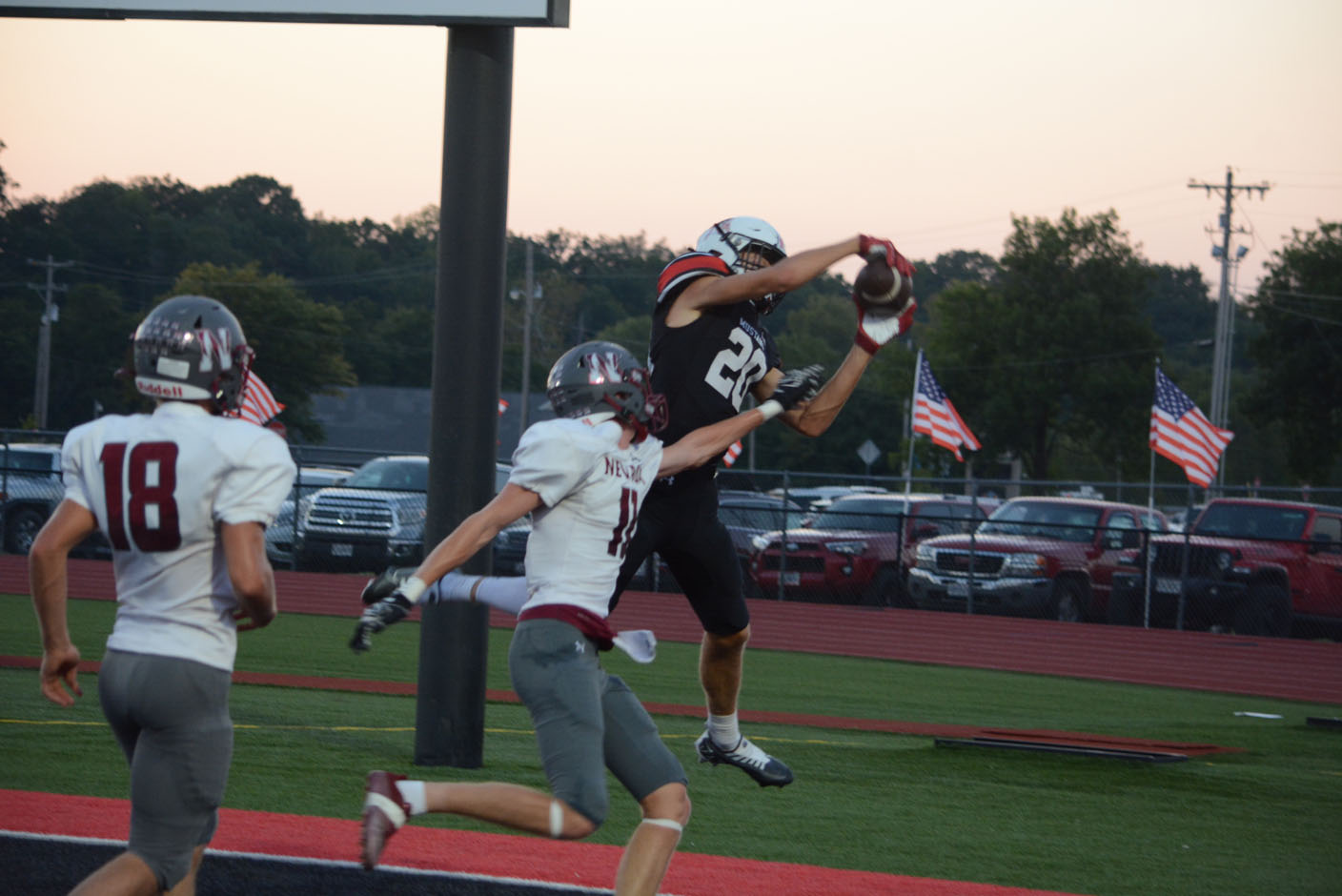 BENNETT HORNE/MCDONALD COUNTY PRESS Senior Isaac Behm catches a pass for a touchdown during his team's 27-26 win over the Nevada Tigers on Friday, Sept. 16, at Mustang Stadium. 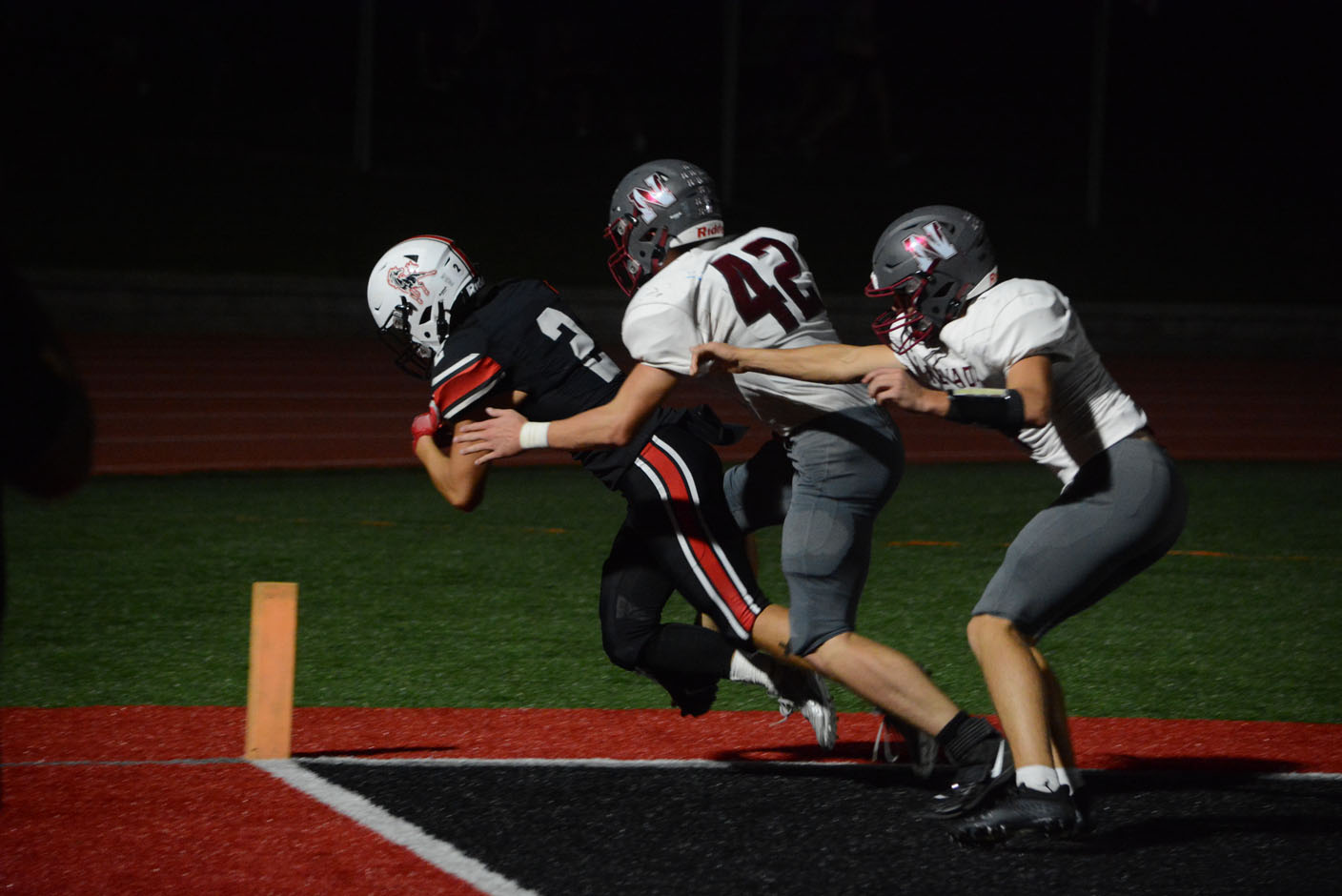 BENNETT HORNE/MCDONALD COUNTY PRESS McDonald County senior receiver Dalton McClain hauls in a touchdown pass in front of a pair of Nevada defenders during his team's 27-26 victory at Mustang Stadium on Friday, Sept. 16.