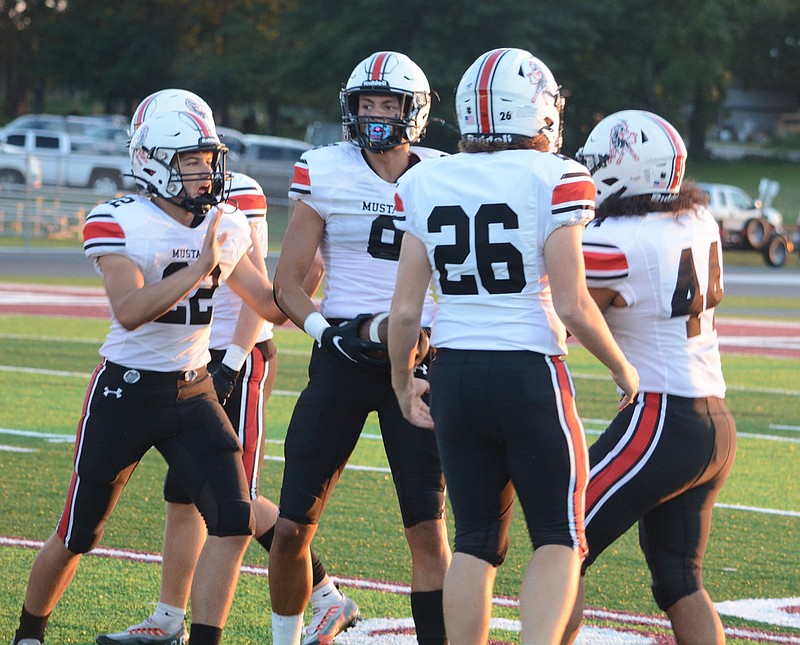 BENNETT HORNE/MCDONALD COUNTY PRESS Joshua Pacheco (center, with ball) is congratulated by teammates Isaac Wagner (22), Jace Thomas (26) and Malosi Sosef (44) after the junior recovered a fumble for the Mustangs in their 21-14 road win over Logan-Rogersville on Friday, Sept. 9.

ROGERSVILLE -- McDonald County's opportunistic defense kept finding ways to get the ball back to its offense, which did just enough to help the Mustangs pound out a 21-14 road victory over the Logan-Rogersville Wildcats on Friday, Sept. 9.

The win, its second in a row, lifts McDonald County to 2-1, while Logan-Rogersville slips to 1-2.

"I'm so proud of our defense tonight and all of our kids," McDonald County coach Kellen Hoover said after the game. "That's a good opponent right there, an opponent that prides itself in being aggressive and physical. It's hard to go on the road in this conference and win any game, but against a really good team like that ... it's a gritty win for our kids."

The Wildcats tried twice in the final five minutes to tie or even win the game, but McDonald County's defense stopped both Logan-Rogersville threats. The first possession started with 5:02 left in the game and ended on a fourth-down incompletion. The second, after the Mustangs were forced to punt, began with 1:43 to play, but again the Wildcats couldn't crack the tough McDonald County defense.

The Mustangs sacked quarterback Thessen Prenger a play after he completed a 16-yard pass to the Wildcat 43. Mustang senior Jack Parnell broke up the next pass and, after a delay of game penalty and another incompletion, Parnell sealed the game by breaking up a pass on fourth down, and the Mustangs took a knee twice for the victory.

"We had to have a little bit of toughness, both physically and mentally, and had to bow up there at the end," said Hoover. "I'm just so proud of our guys tonight."

Logan-Rogersville opened the game with a long drive to the Mustang 32-yard line, only to see McDonald County junior Slyte Osborne recover a fumble at the 24.

The offense couldn't capitalize on the good fortune and turned the ball back over to the Wildcats.

The Mustang defense, however, got the ball back two plays later on an interception by Osborne.

The Mustangs drove the ball to the Wildcat 28 but couldn't convert on fourth down. Logan-Rogersville moved the ball back to midfield, but Sam Barton came up with a tackle for a loss of 7 yards and, on the very next play, Joshua Pacheco recovered a fumble for the Mustangs near midfield, and the offense had another chance.

Quarterback Destyn Dowd completed a pass to Cross Dowd for a 30-yard gain. After an incompletion, Destyn Dowd carried around the left end for a 21-yard touchdown with the help of a big block by Parnell.

Richard Gasca kicked the point-after try and, with 7:05 left in the opening half, the Mustangs were in front, 7-0.

Logan-Rogersville responded with a late charge before the end of the first half. The Wildcats scored on a 5-yard run by Luke Hauer with 1:51 on the clock. Prenger's PAT tied the score at 7-7.

Both teams got a possession each before halftime. McDonald County's ended when the Wildcats intercepted a Destynn Dowd pass and the ensuing Wildcat drive was wiped out with another lost fumble.

The Wildcats opened the last quarter with a drive to the Mustang 10 before Prenger took the ball through the right side of the line for the touchdown. He added the PAT, tying the score at 14-14 with 8:45 left in the game.

After Barton returned the ensuing Logan-Rogersville kickoff 50 yards to the Wildcat 27, McDonald County went ahead for good on a seven-play, 27-yard drive capped by Destyn Dowd's third touchdown of the game -- and Gasca's third PAT -- for a 21-14 score with 5:13 remaining.

"Our defense did such a great job getting the ball back for our offense and, as an offense, we've got to execute better," said Hoover. "But our defense just swarmed tonight and took advantage of opportunities when they were there."

Jordan Saylors finished with 67 yards rushing on 15 carries, while Destyn Dowd ran for 62 yards on 16 totes. He also completed nine of 16 pass attempts for 97 yards. Cross Dowd caught five of his brother's passes for 63 yards, and Dalton McClain grabbed two passes for 27 yards.

The Mustangs finished with 232 total yards on offense while holding the Wildcats to 42 yards rushing on 28 carries and 202 passing yards on Prenger's 16-for-32 night.

"You'd love a prettier win," said Hoover, "but any win getting you going into our side of conference play just boosts our morale and pushes us forward. It's validation for a lot of the things we've been preaching to our guys and working on in practice and really all summer. You like a little validation, obviously, any time you can get a win. We're happy with any win we can get." 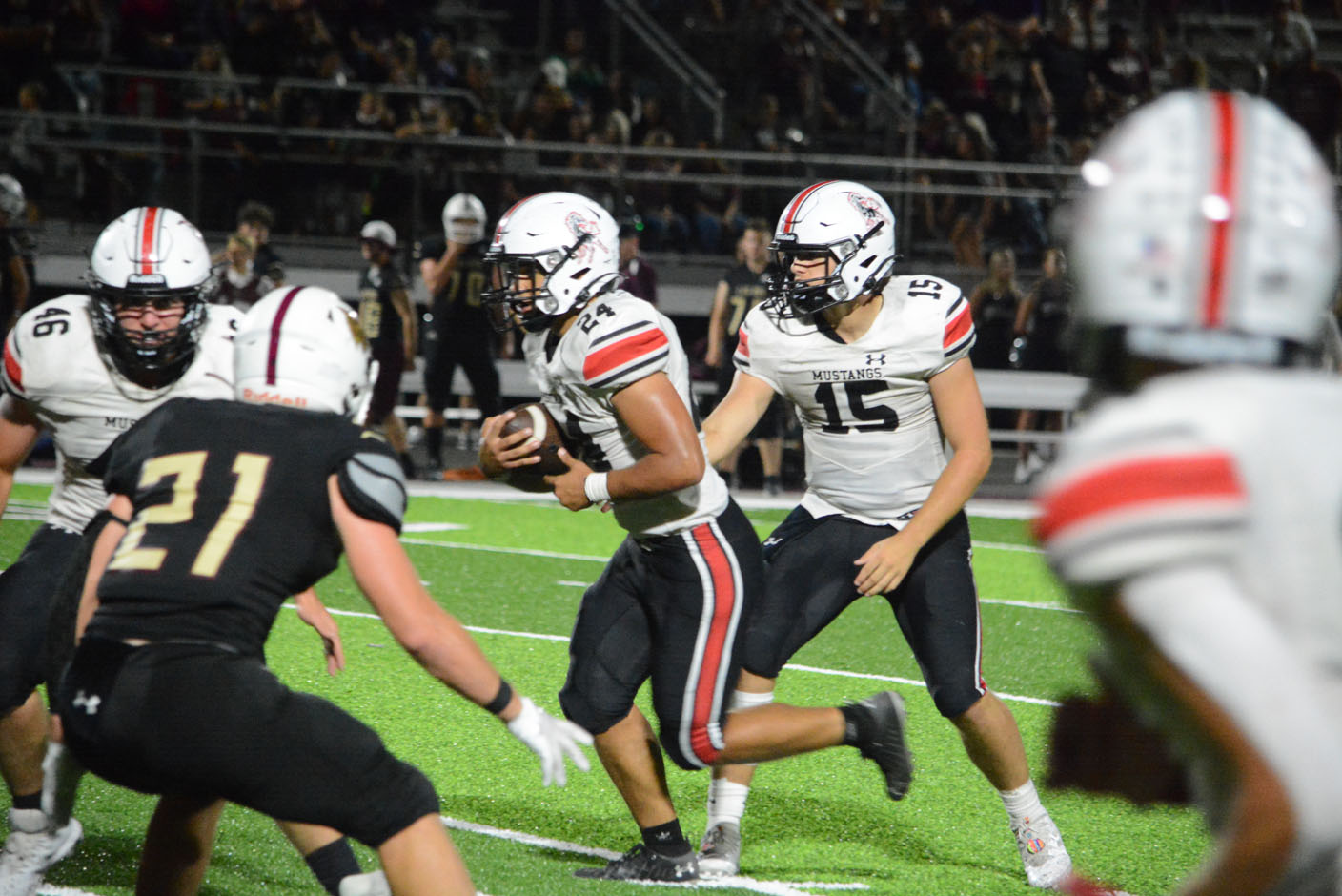 BENNETT HORNE/MCDONALD COUNTY PRESS McDonald County senior Jordan Saylor (24) takes a handoff from quarterback Destyn Dowd (15) and runs behind the block of Weston Gordon (46) during their team's win over the Logan-Rogersville Wildcats on Friday, Sept. 9.