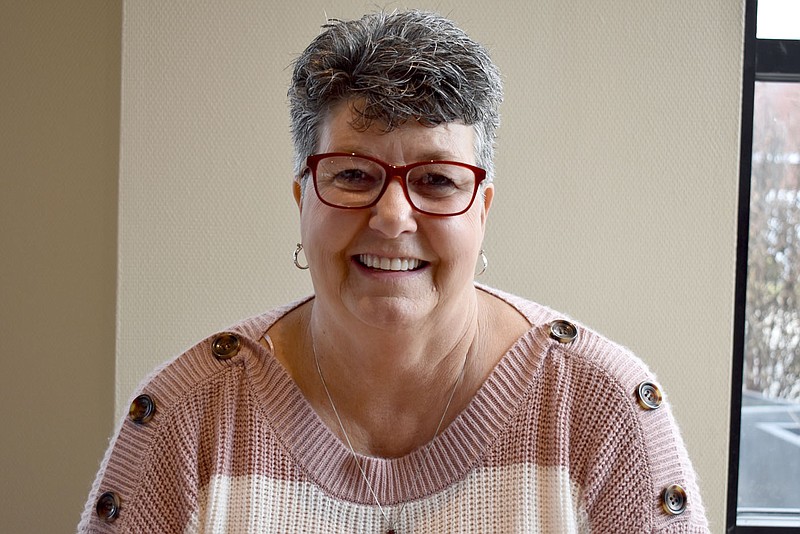 Rachel Dickerson/The Weekly Vista Pam Pepper, of Anderson, Mo., is a former executive director of Concordia. She recently shared some memories of time spent working at the retirement community.

Pam Pepper of Anderson, a former executive director of Concordia, recently shared some memories just in time for the organization's 50th anniversary.

"They changed the name after a while," she said, laughing.

She drove the residents to doctor appointments, the grocery store, to beauty shop appointments, etc. It was included in their monthly fee, she said.

"I loved it," she said. "It was the hardest thing I ever did when I left."

She continued, "The residents were fun. It was challenging. Something new every day."

At the time she was there, Concordia had 35 townhouses, 126 apartments (116 that were used), two assisted living buildings and the nursing care center. She said as a continuing care retirement community, the goal was that residents did not have to leave the campus but could stay as they aged.

The retirement community had activities such as bridge, exercise and happy hour. There was a party every month, she said, such as a party for every holiday, a Hawaiian luau or a Kentucky derby party. At that time, Benton County was a dry county, and Concordia did not have a liquor license, so the residents contributed to the happy hour fund, she said.

"We tried to keep the residents active, moving," she said.

At Easter, the residents would dye Easter eggs and the Easter bunny would come, and there would be an egg hunt for children.

She would also go pick up staff members at their homes at times when it snowed, she said.

She shared stories about her time at Concordia.

When the 911 system came online in the state, she said, residents at Concordia did not know whether they were supposed to dial 501 (which was the prefix for the whole state at the time) before 911.

The first time the staff decided to have a luau for the residents, they bought a big pig, she said.

In 1999, the staff had to deal with the Y2K scare, she said. The corporation that owned Concordia had them be there at midnight on Dec. 31. They set off fireworks, and nothing happened with Y2K, she said.

She is now a partner in an accounting business in Caverna, Mo.

Pepper said she is glad the current staff invited her to the anniversary celebration, and she is excited to see the changes happening at Concordia.