Wrestlers To Kick Off Season With Red & Black Dual 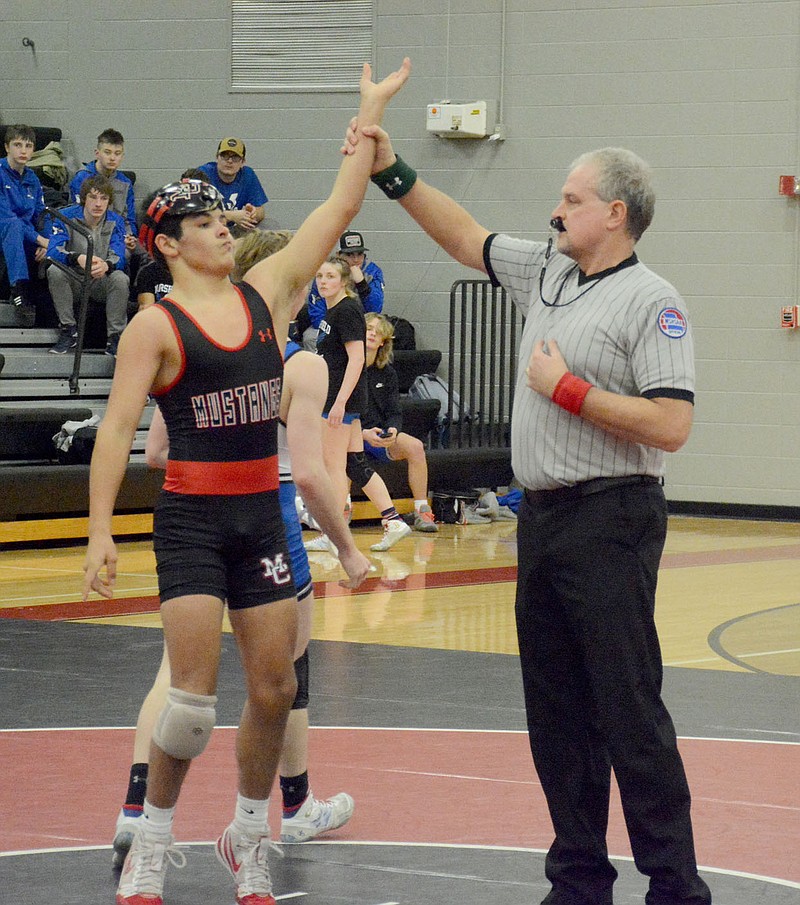 Graham Thomas/McDonald County Press Wrestler Blaine Ortiz has his hand raised after a victory against Marshfield last season. Ortiz and the MCHS wrestlers will participate in the McDonald County Red & Black Dual at 6 p.m. today, Nov. 17, at Mustang Arena.

The Red & Black Dual will be a warm-up of sorts for the Mustangs and Lady Mustangs, who open the season at home against Rogers High and Rogers Heritage on Nov. 29.

"We'll bring our wrestlers in, give them a practice dual so they'll get an idea of how we do things for the regular season matches," said McDonald County coach Josh Factor. "We'll get our younger ones exposed to competition, get them used to competing in front of a crowd."

The Mustangs have several returners from last season in both boys and girls.

On the boys' side, the Mustangs return five state qualifiers in seniors Blaine Ortiz and Levi Smith and juniors Samuel Murphy, Jayce Hitt and Jose Mendoza.

The Mustangs have around 45 wrestlers on the roster to open the season.

On the girls' side, the Lady Mustangs will start the year with around 14 wrestlers, including returners Jaslyn Benhumea, Stacy Lopez-Apolinar and Giselle Aragon.

Factor said the coaches would try and organize some good matchups for the Red & Black Dual.

"We'll match them up as best as we can and give some exciting matchups for spectators," he said.

McDonald County will have a busy opening week of the season, starting with the two Rogers schools on Nov. 29.

Factor said there will be three mats going, two for varsity and one for girls and junior varsity.

"There should be a lot of wrestling that night," Factor said. "Hopefully, we'll get a good crowd."

On Thursday, Dec. 1, McDonald County will travel to Seneca for a meet with Seneca and Diamond.

Then on Saturday, McDonald County will host its Lady Mustang Girls Tournament along with the "Cal Willie" Junior Varsity Tournament.

"It will be a very eventful week for our first week of competition," Factor said.