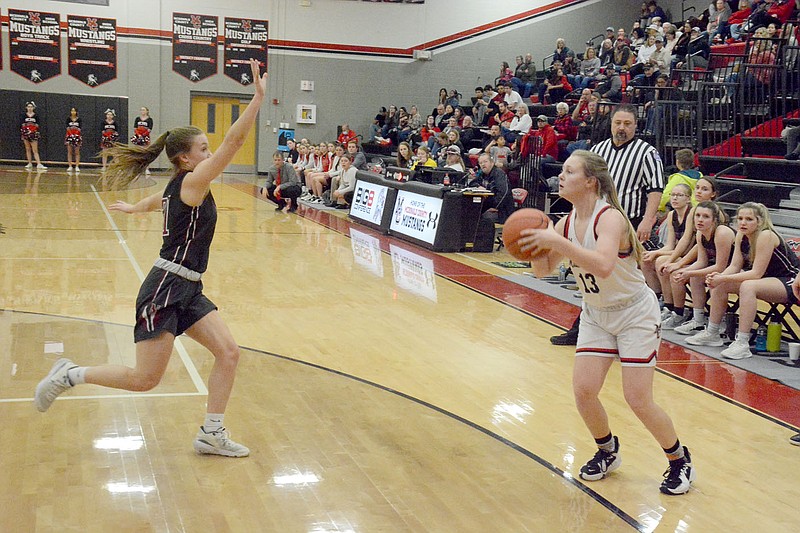 Graham Thomas/McDonald County Press Carlee Cooper prepares to shoot a 3-pointer during a game last season. Cooper and the Lady Mustangs open their season at home Friday against Springfield Hillcrest.

The McDonald County girls basketball team participated in a four-team jamboree on Monday, Nov. 14, at Lamar.

Head coach Sean Crane said the score was reset after every quarter and a scorebook wasn't kept. He said, overall, the Lady Mustangs lost to El Dorado Springs and defeated Butler and Lamar.

"We played pretty well," Crane said. "El Dorado Springs is pretty darn good, and they're pretty salty, but we played all right. We're going to be young, obviously."

Crane said seniors Megan Elwood and Analisa Ramirez both played well in the jamboree. The rest of the team is underclassmen, including three-year starter junior Carlee Cooper and returners Katelyn Townsend and Anna Clarkson. The Lady Mustangs went 5-22 overall in 2021-22.

"We've got some talent," Crane said. "We showed some of that youth (Monday) night and made a lot of young mistakes. But the potential is there with a really, really bright future."

Crane said a couple of freshmen, in Carlie Martin and Jamie Washam, will have a chance to play significant minutes on varsity.

"We're going to have to rely on some youngsters that have a chance to be pretty darn good," he said.

The Lady Mustangs must replace a huge chunk of their offensive production with the graduation of Addy Leach and the loss of Samara Smith, who moved out of the district.

The Lady Mustangs are scheduled to open their 2022-23 season at home Friday against Springfield Hillcrest.

A ninth-grade game is scheduled to begin at 4:30 p.m., followed by junior varsity and varsity.

Crane said the Lady Mustangs don't know much about Hillcrest, only that they're young as well.

He said the focus for McDonald County would be on itself.

"At the moment, we are completely focused on us," he said. "We've just got to get experience."