ASTRONOMY: Take A Look At Galaxies In November Night Sky 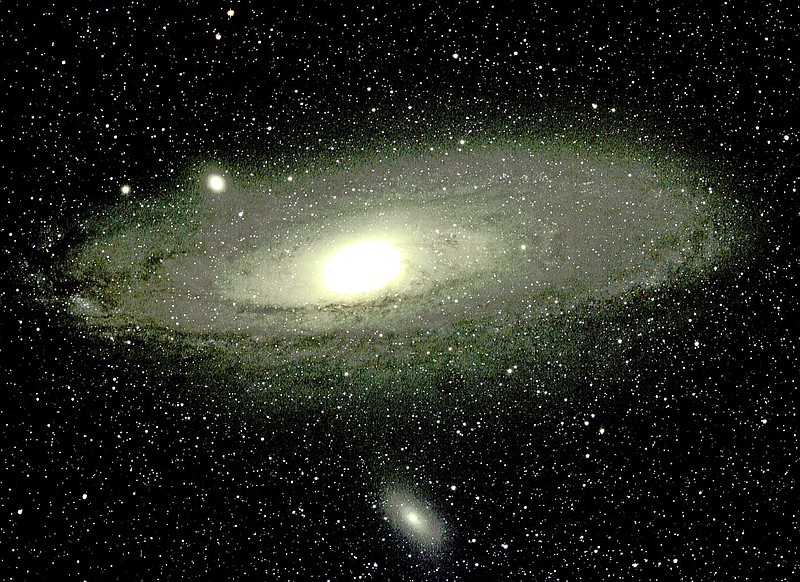 David Cater/Star-Gazing M31 is a spiral galaxy with outstretched arms of stars wound around the central core.

Now it is fall and winter is coming on. The Earth moves through its orbit and, this time of year, we move past being able to see the brightest part of our Milky Way galaxy and we see into the perhaps infinite void of the universe beyond our galaxy.

However, that void is not really empty. Billions of galaxies wheel through their local space, some of them even visible to amateur astronomers.

There is one galaxy, M31, in the constellation Andromeda, that begins to show itself in September and, by October and November, it can be seen close to overhead under dark skies and if one is keen-eyed.

Binoculars show it nicely and telescopes 6 inches and larger will show detail. As galaxies go, this one is on the large size, being greater than 120,000 light-years across -- larger than our galaxy. It lies about 2.5 million light years beyond The Milky Way and is one of the Big Three galaxies in our local group.

These galaxies are our own Milky Way galaxy, a galaxy with the catalog number M33 and M31. M33, rather dimmer than M31, is nearby M31 in the sky, but it has a low surface brightness, and it can be hard to find.

As is our Milky Way galaxy, M31 is a spiral galaxy with outstretched arms of stars wound around the central core. I have included an image of this galaxy that I made about two years ago to give you some idea of the appearance of this beautiful stellar sight. However, I urge you to go out on the Internet and find professional images of this object.

Galaxies have their own motion through space. These motions are difficult to detect because the galaxies are so far away. However, the motion of M31 is detectable and scientists have made accurate calculations of this motion. It turns out, M31 is on a collision course with our galaxy! This collision will occur several billion years from now, so it is nothing to be concerned about in the near future.

Colliding galaxies are fairly common in the universe, and a number of these collisions have been photographed. When such a collision occurs, it is very rare for individual stars in the galaxies to collide because the distance between stars is itself so great. If you want to see images of some of the collisions that have been discovered, browse "colliding galaxies," and you will see very interesting images because while the stars in each galaxy only rarely collide, the gravity of the galaxies greatly distorts the shapes of the original galaxies.

Now is a really good time of the year to view the heavens. There are often clear nights that are bug-free and cool, yet not too cool yet. Get out there and look at the heavens before winter really sets in.