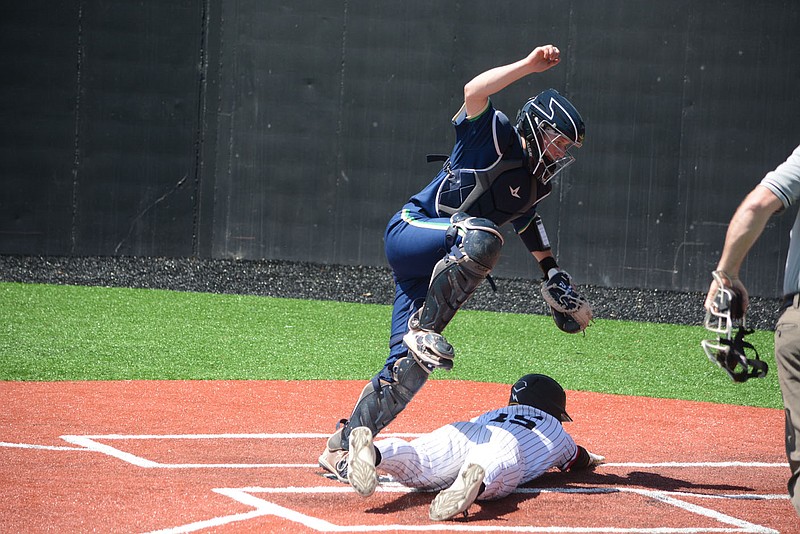 BENNETT HORNE/MCDONALD COUNTY PRESS McDonald County sophomore Destyn Dowd slides across the plate while Catholic catcher Logan Ripper leaps over him to go get the ball during the Big 8 Championship game Saturday, May 7. The Mustangs won the game, 7-1.

ANDERSON -- The McDonald County Mustangs are the Big 8 Conference champions after scoring four runs in the second inning and three in the third on their way to a 7-1 victory over Springfield Catholic on Saturday, May 7.

"It feels really good," said Mustang coach Kevin Burgi of the school's first baseball conference championship. "Whenever you do anything like this, you think about everything, from starting with these guys when they were young, running the summer program like we have where we keep them all together ... these guys have played together for four years and they deserve to win a championship."

The win comes on the heels of the team's second straight Big 8 West title and its first 20-win season.

"These guys have worked hard and have been outstanding with their effort this year," said Burgi.

The Mustangs (21-6), who won all six of their Big 8 West games this season, scored first in the game, pushing four runs across the plate in the bottom of the second inning. Isaac Behm drew a leadoff walk before Cross Dowd was hit by a pitch. Tucker Walters coaxed another walk to load the bases and a walk to Colton Ruddick gave the home team a 1-0 lead.

Cole Martin then cleared the bases with a two-out double, putting the Mustangs in front, 4-0.

Catholic (11-10), which went 5-1 in the Big 8 East, threatened in the top of the third with singles on either side of a fly ball out, but right fielder Levi Helm caught a pop fly in the outfield for the second out, then threw the runner trying to score from third out at the plate to end the inning.

The Mustangs rode the momentum of the big defensive play into the home half of the inning, tacking on three runs on two hits -- a double by Helm and a bloop single to left by Ruddick -- for a 7-0 lead.

Even though the Mustangs had a runner get thrown out trying to steal a base in the at-bat, they benefited from two more rally-fueling walks.

"We knew going in that we could not expand the strike zone, and that if we expanded the strike zone we were going to lose," Burgi said. "I cannot credit the bottom of our order enough for laying off tough pitches and making their starter throw more. Before you know it, you've got your best hitter up with runners in scoring position and that just shifts the game's momentum."

Catholic's only run of the game came on the first home run of the year by Logan Ripper, whose blast off McDonald County starter Weston Gordon over the centerfield wall to open the fourth inning made it a 7-1 game.

"Weston Gordon will be the first one to tell you that solo home runs never beat you," said Burgi. "It's the walks and the other things you allow before the home run that beat you and he never did that and that was huge."

The shot didn't seem to rattle Gordon as he struck out the next two batters and got the third to roll into a ground ball out.

Two of the first three Catholic batters reached on errors to open the fifth but, after McDonald County loaded the bases with an intentional walk, third baseman Fischer Sanny fielded a ground ball, stepped on third and threw the batter out at first for the inning-ending double play.

"My defense always works hard behind me," said Gordon. "They played really well behind me. I just knew I had to throw strikes and fill up the zone."

Gordon faced four batters in the sixth and three in the seventh to hold Catholic at bay while securing the championship win for the Mustangs.

The junior, who was the pitcher of record in last year's championship game loss, said he was happy to get another shot at pitching for the title.

"It's great," he said. "It means that Coach has a lot of trust in me. And the players played great behind me. It means a lot."

Gordon was touched for four hits while striking out six and walking two. Catholic starter Coleman Morrison pitched the first two innings and Cole Schoen the last four. They combined for five strikeouts while giving up four hits and eight walks.

"I just felt we weren't very competitive in the strike zone," said Catholic coach Courtney Spitz. "I think we had as many hits as they did, but anytime you give a team a chance to score without putting a ball in play that's going to hurt you."

He added, "I know they've got a good squad and Coach Burgi does a good job and always coaches his kids well but, at the end of the day, it's baseball. You've got to throw strikes and hit the ball. Sometimes you're not going to get the timely hits you want but, when you compound that with walks and hit by pitches, it makes it tough."

The Mustangs dropped their seventh game of the year against 21 wins after losing at Republic, 6-5, on Monday night.

Republic opened the scoring by plating two runs in the bottom of the third inning off McDonald County starter Levi Helm.

After a scoreless fourth, the Mustangs scored four runs in the top of the fifth for a 4-2 lead, only to see Republic get one run back in the home half of the inning. The Mustangs countered with a solo tally in the top of the sixth to go up by two runs, but Republic tied it at 5-5 in the bottom of the inning off reliever Isaac Behm before winning it with a walk-off run in the seventh.

Helm allowed seven hits and five runs, two of which were earned, while walking three and striking out three. Behm, who was charged with the loss, gave up one run on one hit with two walks.

The Mustangs finished with nine hits against a trio of Tiger pitchers. Helm scored twice in the game and Cole Martin had two hits with one run scored. Behm also had a pair of hits.

The Mustangs picked up win No. 20 with a 10-0, run-rule victory at home in six innings over Seneca on Friday, May 6.

Cross Dowd struck out 10 batters and allowed two hits, while seniors Levi Helm and Cole Martin each hit their fourth home runs of the season.

Helm's two-run shot came as part of a three-run, two-hit third inning that staked the Mustangs to a 3-0 lead.

McDonald County added five runs on three hits and a Seneca error in the home half of the fifth for an 8-0 advantage before ending the game in the bottom of the sixth when Jack Parnell was hit by a pitch ahead of Martin's two-run homer.

The Mustangs were scheduled to host Aurora on Wednesday before opening play in the Class 5, District 7, Tournament in Neosho on Saturday at 4 p.m. against Ruskin. 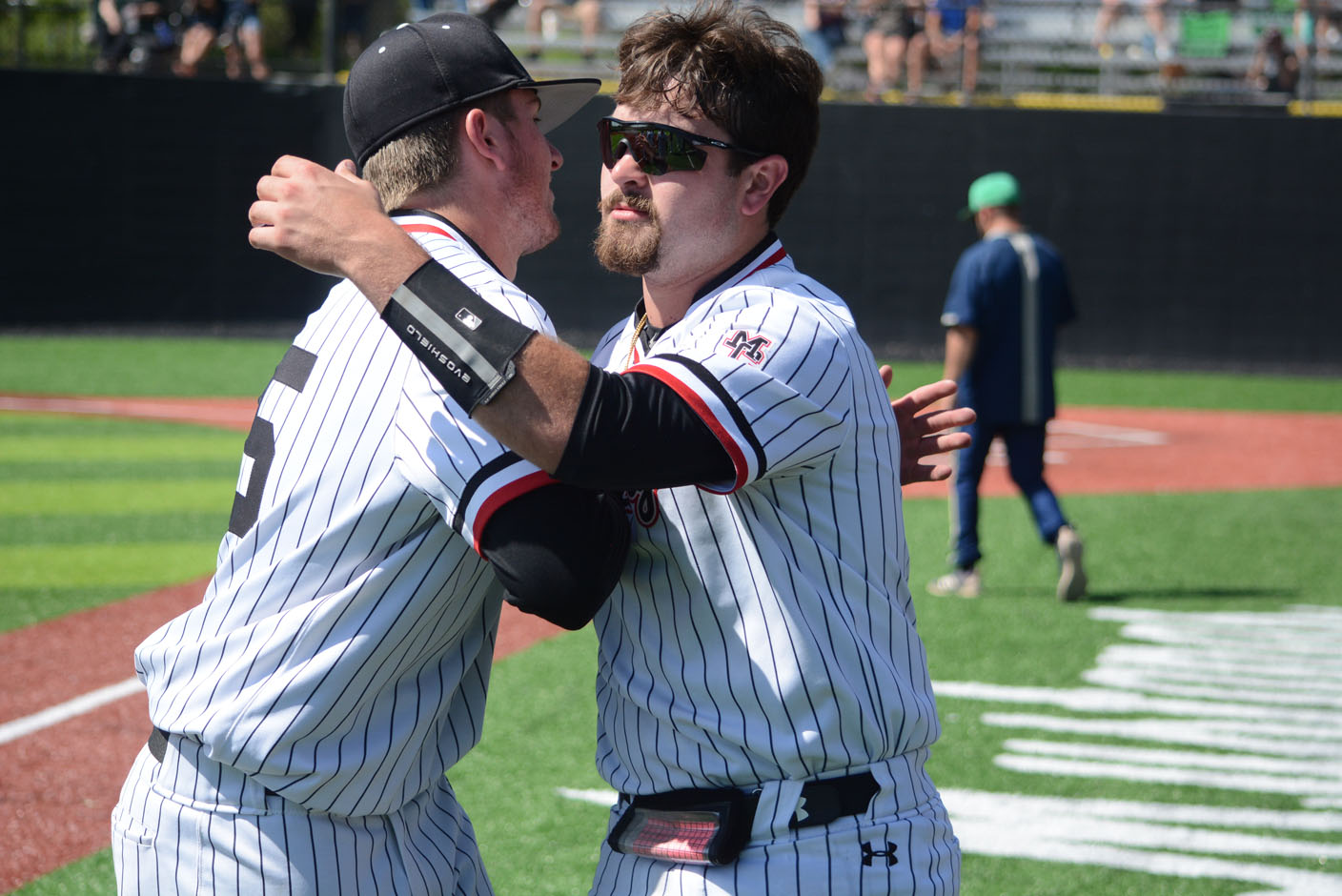