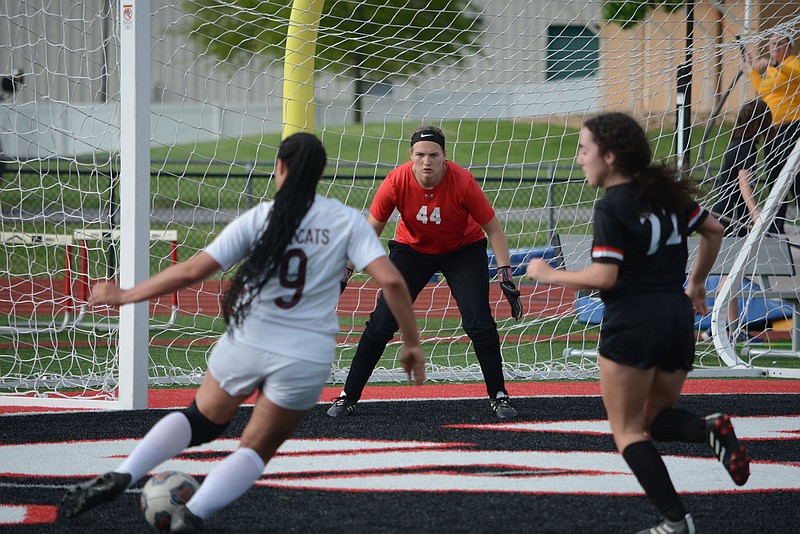 BENNETT HORNE/MCDONALD COUNTY PRESS McDonald County junior keeper Samara Smith (44) prepares to defend against a shot during her team's loss to Logan-Rogersville on Friday, May 6.

Spurred on by students from Noel Elementary School, the McDonald County Lady Mustangs rolled to a 4-1 win over the Pittsburg (Kan.) Lady Dragons Tuesday afternoon in the team's final home contest of the 2022 season.

McDonald County coach John Delatorre said the elementary school students, who had almost filled the seats on the home side by the midway point of the first half, were treated to the game "as a little reward, a little bit of fun to break up their MAP testing schedule they've been going through."

Lady Mustang players were escorted out onto the pitch for player introductions by two students each, the same way professional soccer teams do at the start of their matches.

"It was fun. The girls soaked it up," Delatorre said. "The kids were extremely loud and fired up and it made us play harder and made the other team play harder. The energy in the first half was phenomenal. It was great."

He added, "Quite a few of our boys and girls come from Noel, so it was good."

After having their first goal waived off due to an offsides call at the 15:00 mark of the first half, the Lady Mustangs broke the 0-0 tie on a goal by sophomore Anna Clarkson just 2:11 before intermission.

"The first half was a little back and forth," said Delatorre. "We had a couple of chances and they had some chances. We were finally able to put one away pretty late in the first half to go up 1-0."

The half ended with a save by McDonald County junior keeper Samara Smith.

After Lady Mustang junior Helen Martinez gave her team a 2-0 lead with 28:00 left in the game, Pittsburg missed on two penalty kicks in the box only seconds apart. Smith stopped the first kick while the second hit the right post.

But the Lady Dragons got on the board at 19:26 on a goal by freshman Diana Delgado.

That was as close as the visitors would get as sophomore Keisha Roponei scored on breakaway goals at 12:57 and 8:23 for the 4-1 final score.

"She played a good game," said Delatorre. "She had two goals and two assists. She was definitely the difference. She was unselfish, getting the two assists first, and then was able to find the net twice to ice the game."

ANDERSON -- The McDonald County Lady Mustangs ran into a buzz saw in the form of the Logan-Rogersville Lady Wildcats on Friday, May 6, dropping a 7-0 decision in Big 8 West Conference play.

The Lady Wildcats entered the game in second place in the league standings after losing a 2-0 decision to league-leading Springfield Catholic. The athletic Lady Wildcats left Anderson with improved records of 14-3 overall and 6-1 in the conference while dropping McDonald County to 3-17 and 1-4.

"They're one of the top teams in the conference," said McDonald County coach John Delatorre. "They're pretty athletic. They've got some girls that can run and some girls that can play. We're not necessarily as athletic or technical, and when you match us up against a team like that you tend to give up a few goals just based on pure athleticism."

The Lady Wildcats scored three goals in the first half before tacking on four more in the second.

Despite getting shut out, the Lady Mustangs battled hard to the final horn.

"They usually will work hard every game, no questions asked," Delatorre said of his players. "It's a good group of girls."

The Lady Mustangs, whose Monday night game with Neosho was canceled, travel to Aurora on Thursday before facing Branson in the opening round of the district tournament at Webb City on Monday, May 16. 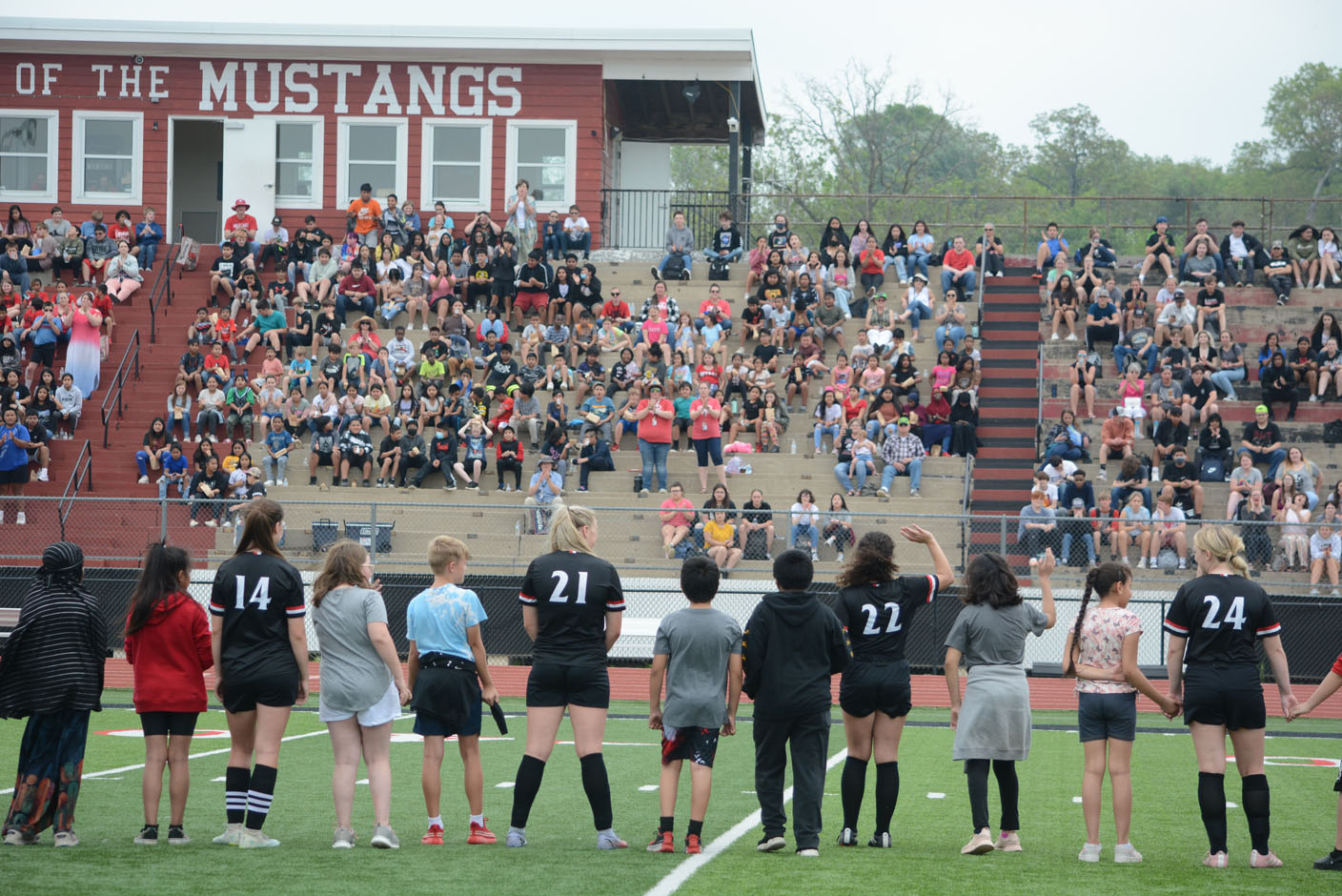 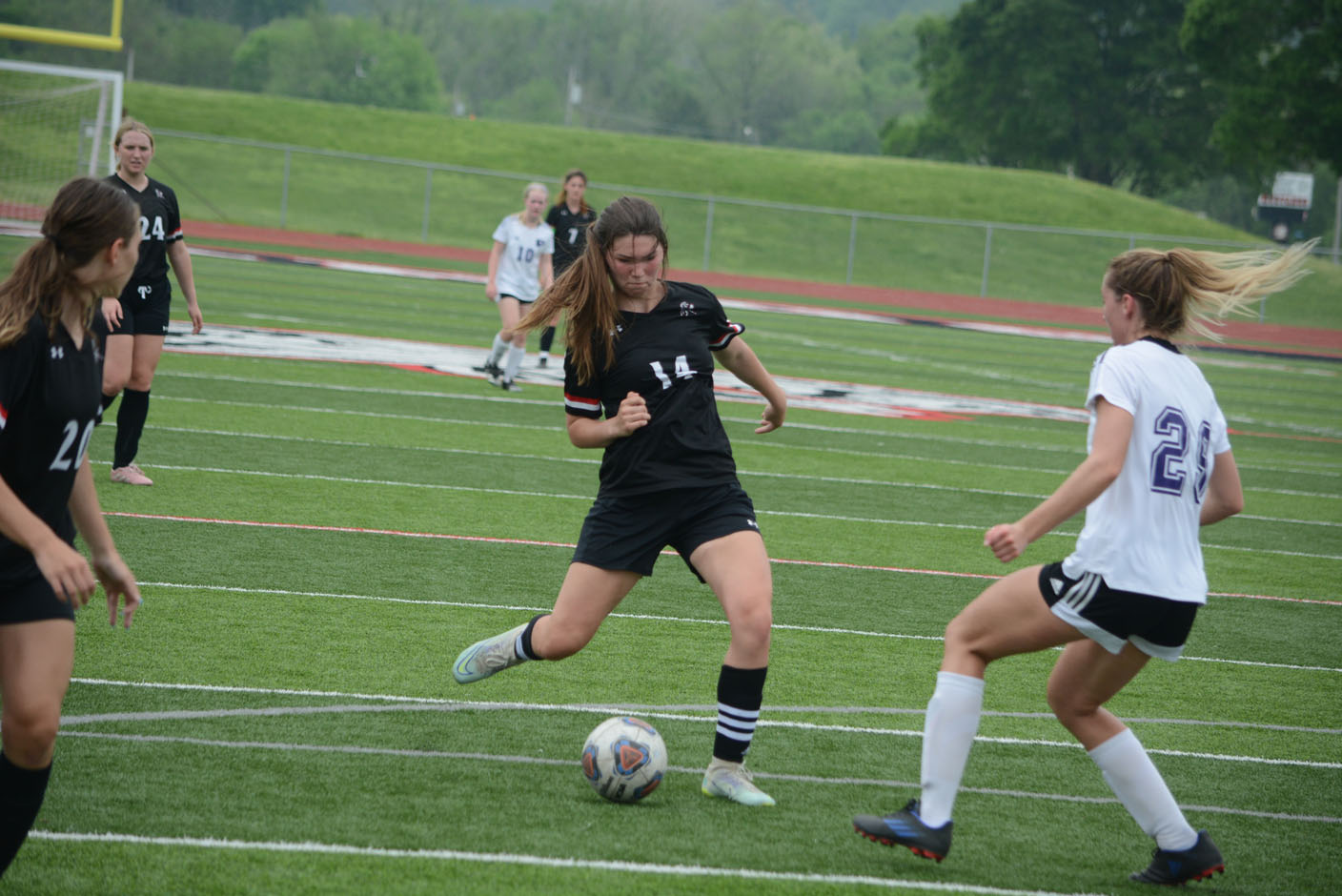