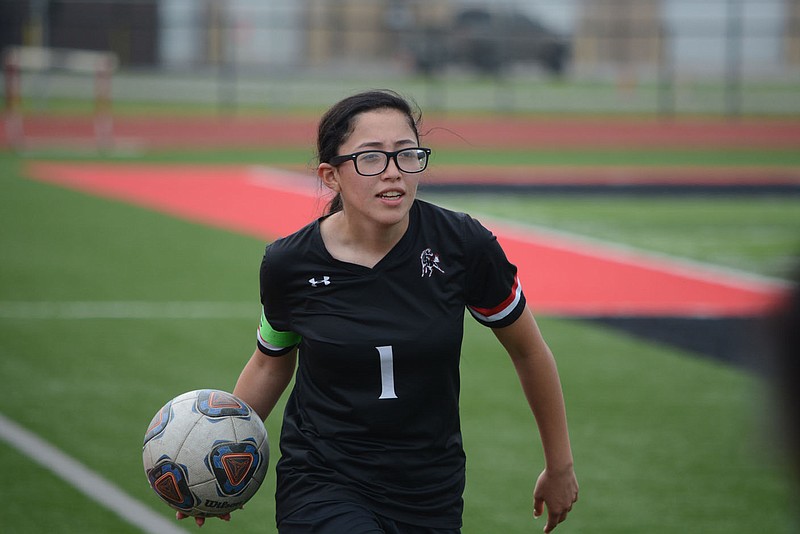 ANDERSON -- In 1968, the group Three Dog Night had a popular hit song called "One," a song which, in its opening verse, proclaimed that number as the loneliest number.

But for the McDonald County Lady Mustangs, the number one represents something much bigger. It is the number on the jersey of Jazmine Belland, the team's one and only senior and its No. 1 leader on the pitch.

"She's been a big centerpiece of this team the last four years," said her coach, John Delatorre. "She'll be missed."

Belland's four years on the soccer squad haven't been the easiest with only a few victories as well as a season in which a pandemic beat up on everyone.

"She was a freshman with a one-win team, then missed a year of covid," said Delatorre. "Everybody missed that second year and then we brought in 20-something freshmen and it was a rough year last year. So this year for her to bring that leadership and help those girls grow has been huge."

Belland has provided a spark that has brought a renewed optimism to McDonald County soccer. The Lady Mustangs are now 4-17 overall after Tuesday's 4-1 non-conference win over Pittsburg, Kan., and 1-4 in the Big 8 West Conference. Throughout the season they have followed the lead of their senior by competing hard to the end no matter the score.

"I feel like it's definitely OK if you're not winning," said Belland. "If you'll just do your hardest and play the best you can, I feel like that's what matters. I don't feel like the numbers are what define us."

Delatorre said that, because she's the only senior on the team, he and the other coaches "have been pretty rough on her about leadership and that kind of stuff." But, he added, "She shows up every day and works hard every day. She's a good leader and we're going to miss that leadership because next year we'll return 99% of our squad, but it will be girls that are still learning the game."

Belland said being the only senior on the team has its good and bad moments.

"It feels kind of good to be the only senior because I get all the love," she said with a laugh, "but sometimes I want to talk with someone that's my age, someone in the same grade. Sometimes it's a little hard because I don't want to set the wrong example. But I definitely don't mind being a leader."

Junior Kadence Elliot said it has been "really nice" having Belland as the team's solo senior leader. She added, "Even though we only have one senior, I feel like she's been a really good leader and has kept us on the right track. She's helped us do what we need to do and accomplish as a team."

Belland has recorded one goal and one assist this season. "But, playing in the back, that's never a bad thing," her coach said.

There are only a few games left in the senior's final high school soccer season, something she said she thinks about constantly.

"Yes, all the time. Every single day. It makes me sad," she said.

But she has more soccer in her future, having signed to be a member of team No. 1 in the history of women's soccer at Crowder College in Neosho.

"It's their first year for women's soccer, so I'll be part of the first generation," she said, smiling. "It's pretty exciting."