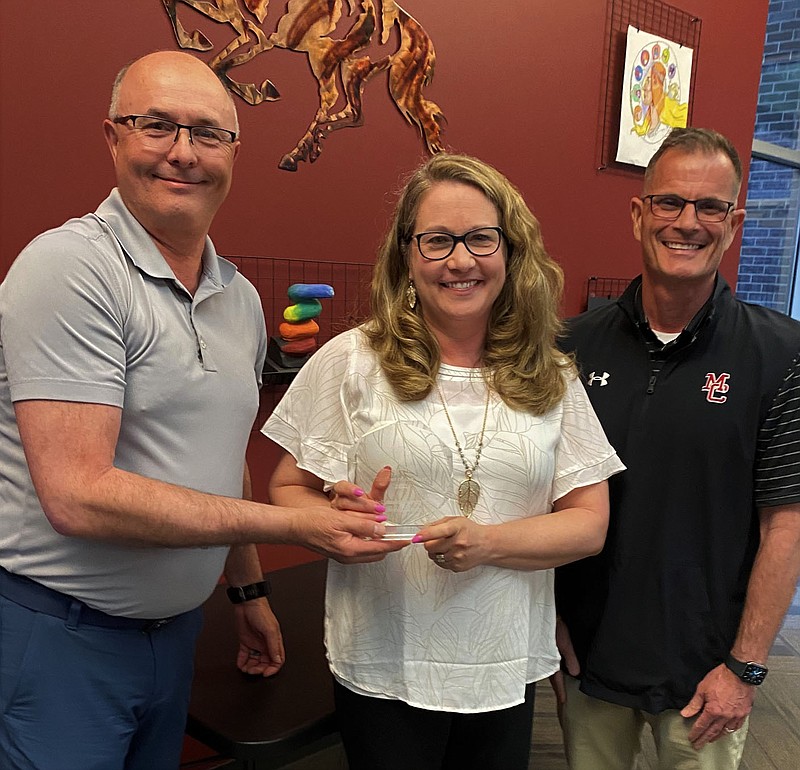 PINEVILLE -- Audrey Cloud, an English Language Learners teacher at Southwest City Elementary School, was named Teacher of the Year for the 2021/2022 school year.

Ken Schutten, communications director for the McDonald County R-1 School District, said district administration reaches out to all teachers and staff members in the school district at the end of the year to begin nominating candidates for Teacher of the Year. Schutten said each school has one nominee, with Pineville Elementary and Pineville Primary School sharing a nominee.

Schutten said all nominees fill out a form that is intended to reflect their teaching career, philosophies, and impact on teachers and students.

"Each candidate gets a list of questions, which they fill out, discussing their background, their teaching philosophy, what they see as far as education in the future, how they've contributed to the training of future teachers, how they've been mentors and things like that," Schutten said.

Schutten said, after each candidate turns in his or her form, a committee made up of administration and retired teachers reviews each form as an application and chooses the Teacher of the Year for the entire district.

Audrey Cloud, a teacher of 21 years, with 14 years in McDonald County, said she was surprised by her nomination and was overwhelmed and honored to hear she'd been named Teacher of the Year.

"It truly is an honor," Cloud said. "It's hard to accept because I work with so many talented teachers. I have to realize it's more than just teaching. It's being flexible, it's getting along with your coworkers, it's being able to balance kindergarten for 30 minutes then get an 8th-grade group of students."

Cloud, an ELL teacher, works with kindergarten through eighth-grade students that are becoming proficient in English, with many of her students speaking a different language at home. Cloud said she loves her job because of the diversity she sees and the creativity she can incorporate into her teaching.

"I love being creative with curriculum, I love the challenge of working with all groups of students who have so much cultural diversity," Cloud said. "They bring so much of their own culture to our building that we benefit from."

Cloud said she finds joy in teaching and looks forward to helping students meet their goals. "It's a huge joy for me when I can tell them that their English, according to my language test, is proficient with their peers in the classrooms that speak English at home," Cloud said, noting that her students feel a sense of accomplishment with her.

Cloud said being named Teacher of the Year is encouraging for her and helps hold her accountable. "I feel encouraged, but feel a bit more pressure," Cloud said, laughing. "I feel pressure to live up to it." Cloud said, as a teacher, she hopes to promote and celebrate the diversity she sees in her students on a daily basis.

"I really want the public to know that English Language Learners bring so much more than people realize to our community, and to our environment, and to our school," Cloud said. "I hope they can see the positivity of their diversity and their culture to our community."

Schutten said the district wants Cloud, and other teachers nominated for Teacher of the Year, to know they're appreciated and seen in the school system.