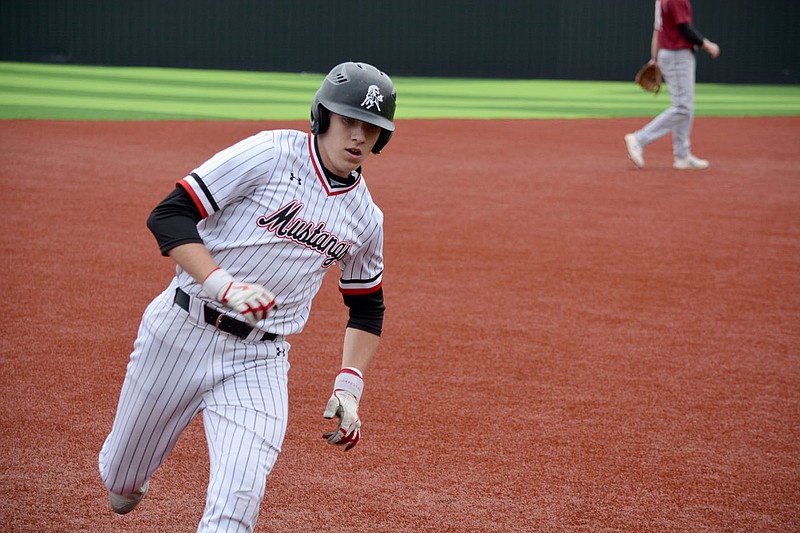 GRAHAM THOMAS/MCDONALD COUNTY PRESS McDonald County junior Cross Dowd advances to third base on a wild pitch in the fourth inning of the Mustangs' game against Nevada on Tuesday in Anderson. Dowd would later score on another wild pitch to give the Mustangs their second run in what would be a 2-0 win to capture the Big 8 West Conference championship.

ANDERSON -- McDonald County's baseball team checked off another box on its list of goals Tuesday afternoon.

Led by a dominant start from senior right-hander Levi Helm and some strong defensive plays behind him, the Mustangs defeated Nevada, 2-0, to win their second straight Big 8 West Conference championship.

The Mustangs improved to 19-6 overall and 6-0 in the Big 8 West despite only mustering two hits against Nevada junior left-hander Case Sanderson, who's committed to play at Nebraska.

Helm, who improved to 6-1 on the season, pitched 6 1/3 innings, allowing two hits with 11 strikeouts and three walks. Helm pitched into the seventh inning before hitting his pitch count and gave way to Weston Gordon, who got the final two outs for the save.

"At the beginning of the year, we came in with one goal and that was to be on top in the Big 8 West, and we just accomplished that," Helm said.

Both pitchers benefited from some flashy leather throughout the day.

Isaac Behm made a diving catch in left field to prevent a potential run-scoring extra-base hit in the third inning.

Fischer Sanny made a nice pick at third base to end the sixth inning. Then with two on in the seventh, Sanny also made another stop at third and raced to the base for the force out to end the game.

"Obviously Helm was outstanding and Weston Gordon threw incredibly well," Burgi said. "That can't go by the wayside. But the play Behm made and the two plays Fischer Sanny made at third are huge. If none of those plays are made, that game is a completely different game.

"Obviously, Isaac Behm hitting in the four-hole has been really good for us. Fischer Sanny's a guy that's been in and out of the lineup offensively. He's always been at third, and he's a guy that, when you go back and talk about the season, maybe he's a guy that you don't bring up, but he has been so big at third base. For him to make the two plays he made today and save a run for sure, maybe a second one, it's just huge."

Offensively, the Mustangs did just enough to scrape together two runs against Sanderson, who went six innings with nine strikeouts and two walks.

Cole Martin ripped a one-out base hit in the third inning, advanced to second base on a wild pitch and moved to third on a groundout by Destyn Dowd. Martin scored on an infield hit by Helm to give the Mustangs a 1-0 lead.

McDonald County got one more run in the fourth. Cross Dowd walked to open the inning and advanced all the way around the bases on three wild pitches for a 2-0 lead.

That's all the offense the Mustangs would need with Helm in complete control on the mound.

"It feels good," Helm said. "It's a lot of pressure having everybody who started on the field last year come back. Everybody's watching you. You've got a target on your back and you've got to perform every time you come out here."

The Mustangs now will play in the winner of the East, Springdale Catholic, at 4:30 p.m. at home on Thursday in the Big 8 Crossover championship game.

Burgi said the Mustangs want to finish the job in the Big 8 after losing to Logan-Rogersville in the crossover game last year.

"We were here last year," Burgi said. "We were short last year. We want the whole thing. Obviously, (Springfield Catholic) is going to be really, really good and we're going to have to play good baseball. Our guys will be ready to go and we'll see what happens."

The Mustangs are also scheduled to host Mount Vernon on Friday in a nonconference game.

McDonald County picked up a win Thursday, April 28, against the Northwest Arkansas Hornets at MCHS.

Cole Martin led the Mustangs with two hits, while Isaac Behm and Colton Ruddick each had a hit and RBI. Cross Dowd and Tucker Walters each had a hit and run scored. Levi Helm had an RBI, while Weston Gordon, Jack Parnell and Rylan Armstrong scored runs.

Helm got the win with six shutout innings, five strikeouts, and two hits allowed, with one walk. Behm pitched a scoreless inning and allowed one hit.

Glendale scored three runs in the fourth inning to take a 4-2 lead before holding on for a one-run victory at McDonald County on Wednesday, April 27.

Glendale took a 1-0 lead in the third inning, but McDonald County scored two runs in the bottom of the inning to lead 2-1.

Mark Ross hit a solo home run for Glendale to open the fourth and the Falcons would add two more runs to go 4-2.

McDonald County got a run back in the sixth.

Sebastian Norman had two hits and three RBIs for the Falcons (16-5), while Carter Lewis and Jacob House had two hits each. House got the win on the mound. 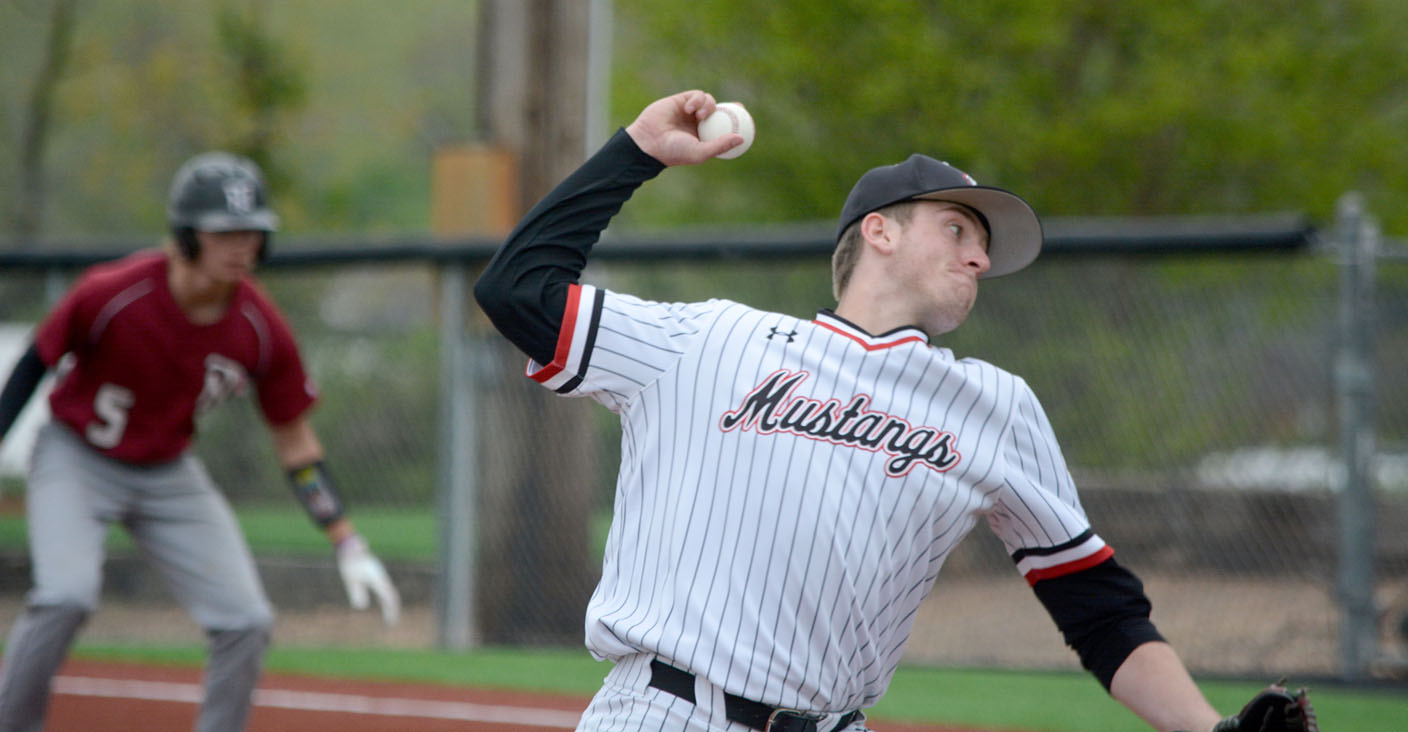 GRAHAM THOMAS/MCDONALD COUNTY PRESS McDonald County junior Weston Gordon throws a pitch in the seventh inning against Nevada on Tuesday. Gordon got the final two outs of the game to record a save in the Mustangs' 2-0 win. The victory sealed a second straight Big 8 West Conference championship.