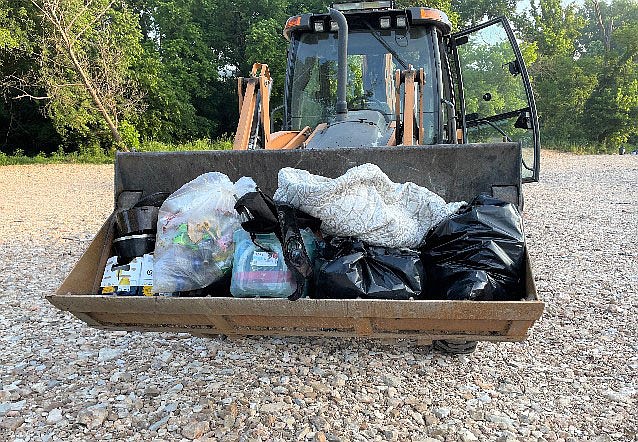 PHOTO PROVIDED BY BRANDON BAILES One of two loads of trash picked up from Anderson Beach on a single day. Bailes said the majority of the trash is alcohol bottles, which are not permitted on the property.

ANDERSON -- Anderson Beach, located on Mill Street, off Canning Factory Bridge, is being flooded with litter during the summer months, an issue that has been prevalent for several years.

Last summer, Mayor Rusty Wilson decided to add trash cans to the Anderson Beach area to cut down on the amount of litter present in the public space, an initiative that worsened the issue. At a city meeting on June 21, police chief David Abbott said the trash receptacles were always full, with trash overflowing and on the ground around them. Chief Abbott noted Anderson's public works department could barely keep up.

Mayor Wilson said that, after he learned the trash cans were worsening the litter last summer, the city removed the bins -- which did not resolve the issue. Wilson said the ground is frequently cluttered with litter, which he noted has been an issue for at least two years. Wilson said the preset fines for littering are applicable to the area, with fines ranging from $50 to $500, depending on the severity of the litter.

"We request the help of the city with the trash," Wilson said. "We ask that everybody do their best to pick up. Put the trash in the right receptacle for trash and, if there isn't one, we ask that they take the trash with them and dispose of it in a different location."

Bailes said the team often collects five to ten 55-gallon trash bags full of trash from the area during the weekly cleaning.

"Any time we have a large crowd down in the Anderson Beach area, we usually get left with quite a bit of trash to pick up," Bailes said.

Bailes said the majority of the trash the department finds is glass alcohol bottles, often shattered on the rocks. Bailes said alcohol consumption is not permitted on Anderson Beach.

"It doesn't look good to anyone traveling through town or floating the river," Bailes said. "When they go down to the beach, they think, 'Hey, it's going to be clean and nice,' but typically, any given day, it could be terrible. It just depends on the day."

At Anderson's city meeting held June 21, the board voted to increase fine signage at the location as well as offer a dumpster for citizens to take their trash. Mayor Wilson said the dumpster will be installed within the next few weeks. 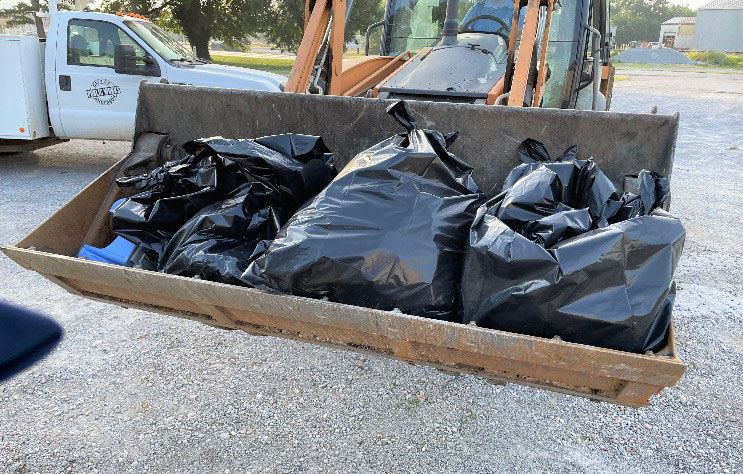 PHOTO PROVIDED BY BRANDON BAILES One of two loads of trash picked up from Anderson Beach on a single day. It takes two hours to pick up trash during each pick-up, with days surrounding holidays taking longer.