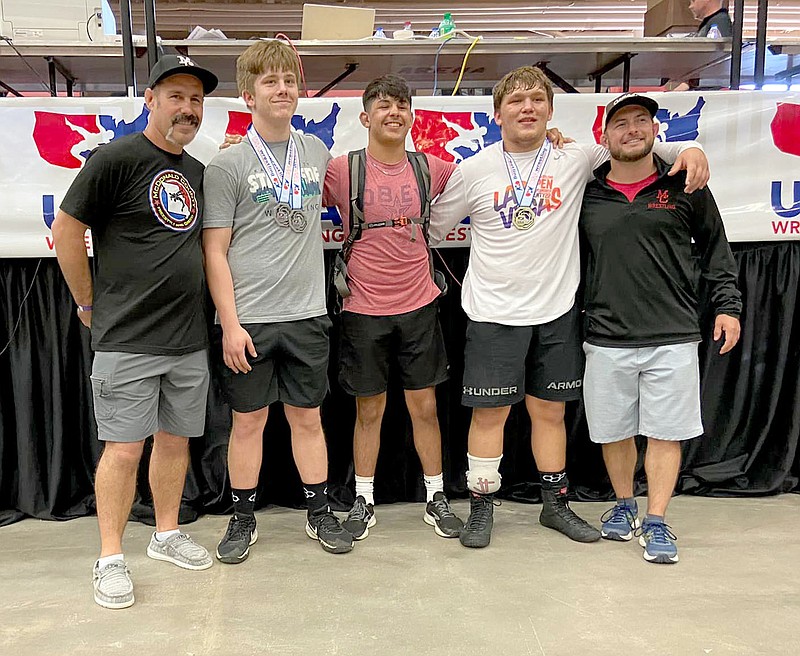 The Southern Plains Regional is one of seven regional tournaments put on by USA Wrestling, in which the top three finishers (in both Greco-Roman and Freestyle) earn automatic bids to represent their state team at the Marine Corps USA Wrestling 16U and Junior National Championships held in Fargo, N.D., on July 16-22, according to McDonald County coach Josh Factor.

"This event featured some of the top high school wrestlers in the country," Factor said of the event in Kansas.

Bogart finished second in both events and also qualified for nationals.

The highlight of the weekend was Murphy's overall performance, Factor said.

On Saturday, Murphy finished second in the Greco-Roman with a pair of victories in the quarterfinals and semifinals before losing to Oklahoma's Oscar Williams by a 6-3 decision in the first place match. Williams was the 2021 Fargo Greco-Roman National Champion at 170 pounds, according to Factor.

Murphy got a little payback on Sunday in the Freestyle as he won his first two matches and then defeated Williams by decision in the semifinals 8-6. Murphy then won by technical fall over Torin Forsyth of Kansas, 11-1

Murphy is scheduled to compete in both Freestyle and Greco-Roman for Team Missouri in the Junior National Duals on June 15-19 at the Cox Business Center in Tulsa, Okla.

Bogart won his first two Greco-Roman matches by fall on Saturday, defeating Cael Coulombe of Tennessee in 1 minute, 56 seconds, and then pinning Maer Deng of Missouri in 2:33 in the semifinals.

In the first-place match, Bogart lost by technical fall to Brennan Carey of Missouri.

On Sunday, Bogart opened the day with a 29-second fall win against Simon Schulte of Illinois. He then beat D. Benjamin Cooper of Missouri by technical fall, 12-1.

Bogart lost to Carey in the finals by an 11-0 technical fall.

"Alex Bogart may have reached a whole new level in his contribution to MCHS Wrestling after taking second place in both Greco and Freestyle competition and qualifying for Fargo again, only this year in both styles," Factor said. "Alex had some great wins against fellow Missouri wrestlers -- over D. Benjamin Cooper (Lebanon High School) and Maer Deng (Staley High School), and all his wins came by fall or technical superiority with several four-point throws over the weekend."

Ortiz dropped both of his matches in Greco-Roman on Saturday.

However, in Freestyle on Sunday, he won his first two matches, defeating Brady Mason of Kansas by 10-0 technical fall and a 2:30 fall win against Christopher Andersen of Oklahoma.

Brady Ison, of Indiana, who beat Ortiz on Saturday, also recorded a win over Ortiz on Sunday by fall in 1:44 in the quarterfinals. Kolby McClain of Missouri won a 7-4 decision over Ortiz in the consolation finals.

Factor said the 138 Junior division was filled with multiple state champions and Fargo All-Americans and was a tough field for Ortiz.

"Blaine gained valuable experience competing against these top-notch opponents," he said. "Although he failed to win a match in Greco-Roman competition, Blaine was the only Missouri wrestler in his 32-man bracket to reach the quarterfinals in Freestyle."

Factor said Ortiz's most exciting Freestyle match came in the consolation round where he lost to McClain.

"McClain pinned Blaine the last time these two met up at the Branson Invitational during the high school season, but this time Blaine would close the gap, scoring two takedowns in the match only to fall short in a 4-7 decision in favor of McClain," Factor said. "I feel like this was a great confidence booster for Blaine and could very well be a preview to a state finals match-up for next year's season. I am very proud of the effort he gave this weekend and looking forward to this experience carrying over to his success during next year's high school season."