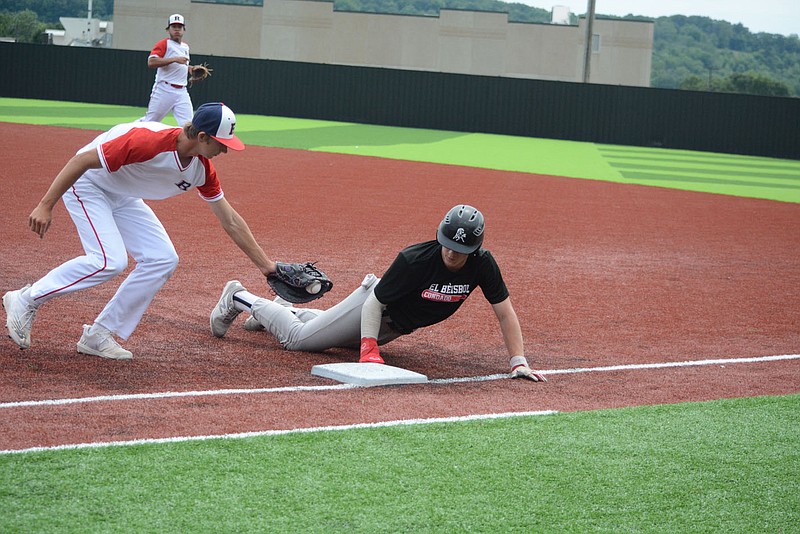 BENNETT HORNE/MCDONALD COUNTY PRESS McDonald County’s Cross Dowd dives safely back to first during Sunday’s 9-3 win over Rocktown 17U, from Little Rock, Ark., in their showcase game played on the Mustangs’ home field.

ANDERSON -- The McDonald County 18U Mustangs used the final game of their first baseball showcase of the summer to show off their pitching and defense en route to a 9-3 victory over Rocktown 17U at Mustang Field on Sunday.

Mustangs pitcher Isaac Behm was as solid on the mound as his defense was behind him, striking out 10 while scattering five hits over seven innings against the team from Little Rock, Ark., in the Big Fire Showcase. He walked two and hit one batter.

Rocktown rolled into eight groundouts in the game. McDonald County shortstop Cross Dowd recorded five of them, third baseman Fischer Sanny two -- including one that started with an unassisted out at third and a throw to first for a double play -- and second baseman Tucker Walters one.

"We just try to let our pitchers do their thing, get weak contact and make plays behind them and do the best we can to help out our pitchers," said Dowd.

As one of the Mustangs' regular starting pitchers, and the author of a no-hitter during the recent high school season, Dowd knows the importance of strong defensive support.

"It means a lot to have a great defense behind you. It really does," he said.

Behm was more than happy to have the good glove work for his outing.

"The defense behind me was excellent," he said. "Cross and Fischer made quite a few plays. Our defense was great today."

The Mustangs were quick to capitalize against Rocktown in the bottom of the first inning when Dowd led off by getting hit by a pitch ahead of a Walters walk. Behm then drove Dowd in with a single to center field for a 1-0 lead.

Behm hit a one-out triple to center field in the third, then scored from third when the Rocktown catcher and first baseman collided in foul territory while the catcher made the catch of the popup to make it 2-0.

McDonald County broke the game open in the bottom of the fourth by scoring five runs on two hits and three Rocktown errors.

The first three Mustangs reached on an error, a walk and a hit batter to load the bases. Sanny scored on a walk to Lane Pratt and Jake Gordon and Cooper Sprenkle scored on a throwing error by the pitcher, staking McDonald County to a 5-0 advantage.

Pratt later scored on a wild pitch and Behm, who reached on an error, came across the plate on a single to left by Weston Gordon for a 7-0 Mustangs lead.

Rocktown scored its first two runs of the game in the fifth on a leadoff single by Jack Reinhart and triple up the left-field line by Aston Hurst who, after a strikeout, scored on a single by Brendan Smith to trim the margin to 7-2.

Rocktown's final run of the game came in the top of the seventh when Reinhart led off with a single before giving way to courtesy runner Alex Brown, who stole second, took third on a fielder's choice and scored on the Mustangs' only error of the game.

Parnell and Sanny were both hit by pitches to start the home half of the seventh and Gordon drew a walk to load the bases. Noah Gailey came on to pitch for Rocktown and promptly hit Sprenkle and walked Pratt for the 9-3 score with the game being called due to the 2.5-hour time limit.

"We were able to put a couple of runs on the board early to give us a little bit of a lead," said Mustangs coach Heath Alumbaugh, "and I think that allowed Isaac to settle in on the mound and just throw the ball over the plate, which he did really well today."

As for the team's outstanding defense, he said, "We were very clean. We only had one error on the day."

The coach said the defense was part of an overall goal the team strives to reach each time it takes the field.

"We talk about that all the time: make routine plays, throw strikes and get timely hits and that will win games," he said.

On Friday, the Mustangs lost to Arkansas Express, 4-0, then lost on Saturday by a slim 3-2 count to one of two Natural Baseball Academy teams playing in the showcase.

When asked what positives he took from the weekend showcase, Alumbaugh said, "I was proud of our situational hitting. We did a great job all weekend of getting bunts down when we needed to. And then it would be our ability to throw strikes on the mound. We had two guys this weekend go eight innings and then Isaac goes seven complete in this game. We've got a lot of arms and got them all warm but didn't even get to see them all."

While the McDonald County 18U team is made up of the same players who played on the high school team, the opposing teams they play in these summer showcases will primarily be travel teams.

"The summer's just about getting better," Alumbaugh said. "What's cool about it for us is that we have our guys and the teams we're playing are travel teams put together from a combination of kids from different schools. We can go out and compete with our guys against these all-star teams it will bode really well for us in the future."

The Mustangs' next showcase will be Saturday and Sunday at Labette in Coffeyville, Kan. 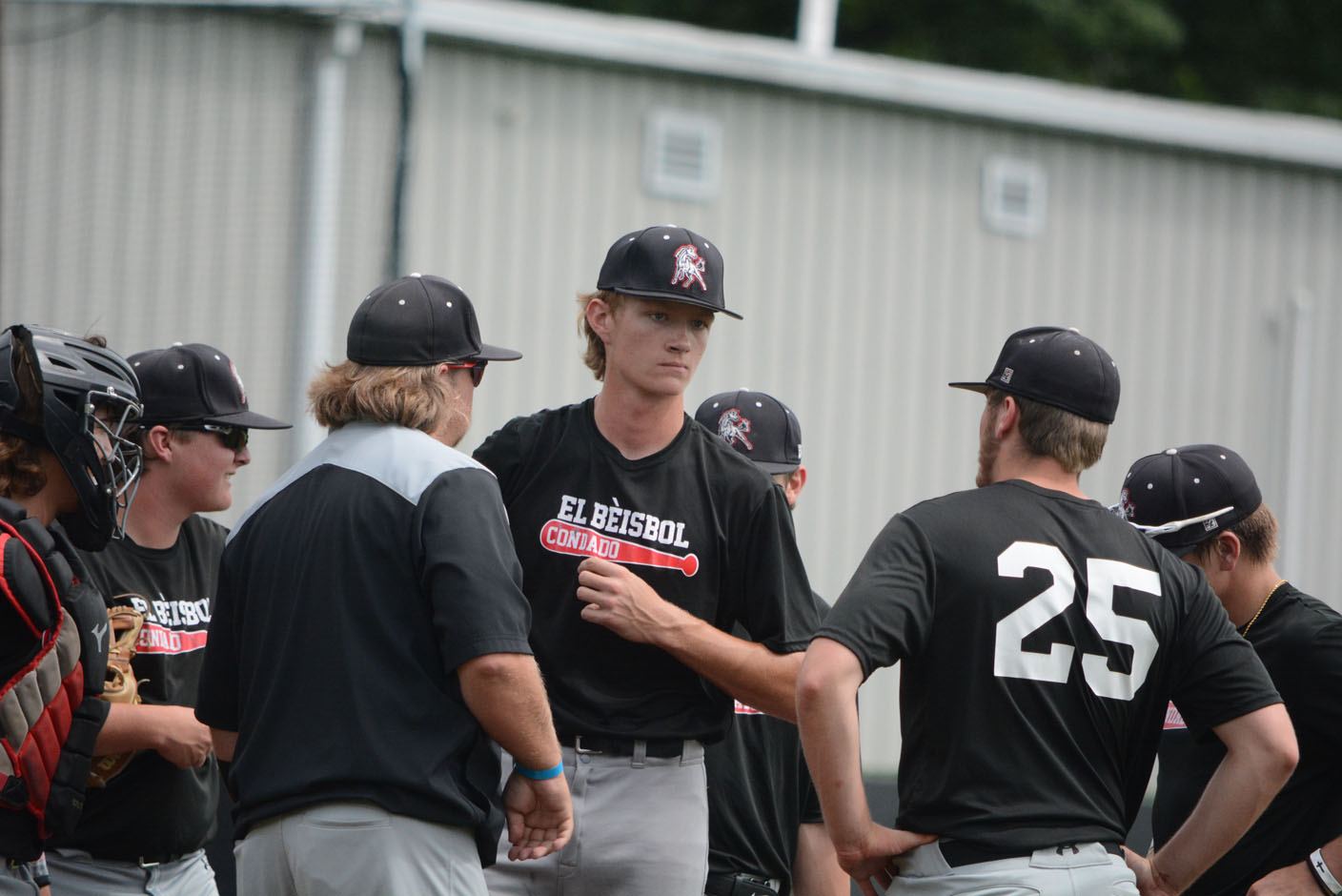 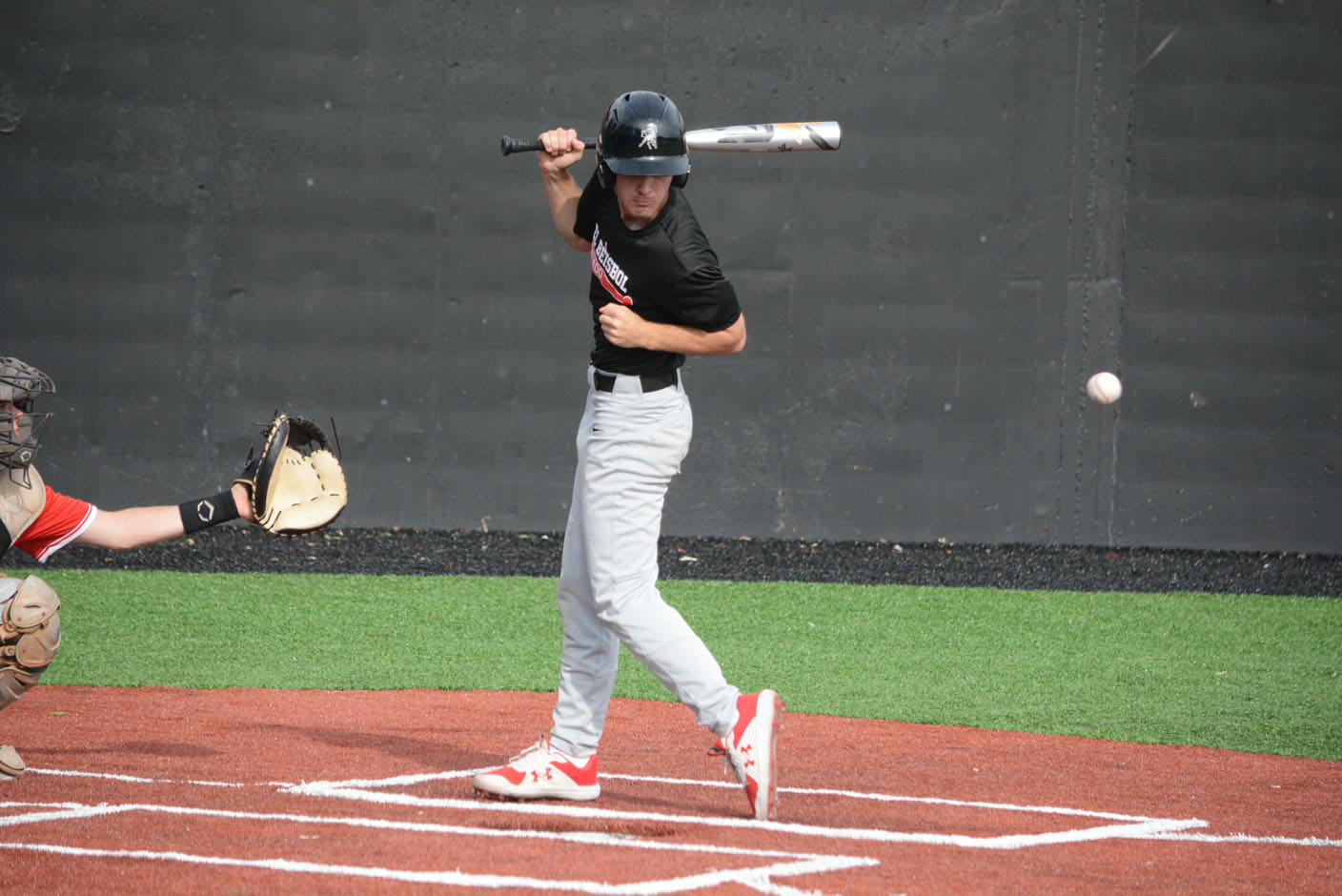 BENNETT HORNE/MCDONALD COUNTY PRESS Cooper Sprenkle, the Mustangs’ extra hitter in its Sunday showcase game against Rocktown 17U, tries unsuccessfully to avoid getting hit by the pitch during his team’s 9-3 victory at Mustang Field.