ASTRONOMY: A Look At The June Night Sky 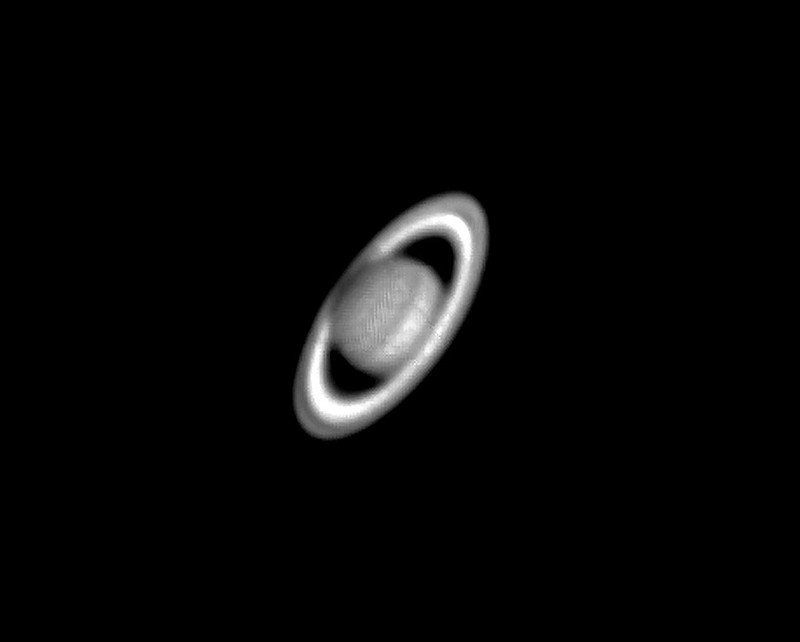 David Cater/Star-Gazing Saturn, seen here, along with planets Mars, Venus and Jupiter, will be lined up across the southeastern sky in June.

"Wow, Dad, that's so cool!" Exclamations such as this were commonly heard as many children, and adults as well, examined the sun with telescopes brought to the Farmers Market on May 7.

The telescopes were equipped with safe filters so there was no risk of eye injury as people looked at the sun, both in normal light and in the light of fusing hydrogen, H-alpha.

Members of the Sugar Creek Astronomical Society brought the telescopes as part of the celebration of Astronomy Day. SCAS estimated that about 170 people looked through the telescopes, many more than expected.

As June comes on, the Milky Way starts to make its appearance -- as it does each summer. It will appear earlier and earlier in the evening as summer moves along. From Siloam Springs, I have noticed that it is harder and harder to see because of increasing light pollution. I fear this will only get worse. So, if you want to see the Milky Way in all its magnificence, go to the darkest site you can. Binoculars are always the best way to look at the Milky Way unless there is something you need to see closeup. Then you need a telescope, but not even a very advanced one.

At dawn, get up to see Mars, Venus, Jupiter and Saturn lined up across the southeastern sky. I have included an image of Saturn I made when one of these planetary lineups occurred last year. A six-inch telescope will show you about the same detail -- or better.

With the right equipment, an 8-inch telescope or larger, many galaxies will still be visible in June, off the hindquarters of Leo the Lion, the prominent constellation in May. This area has shifted toward the west in the night sky, as the Earth moves around its orbit; now is the time to observe the so-called Realm of the Galaxies if you know where to look.

I am hoping that, with summer coming on, there will be fewer clouds obscuring the night sky. Amateur astronomy can be very frustrating, what with clouds, rain and the moon getting in the way of deep-sky observation. One can only sit in the garage, buffing up the equipment for so long without getting star-starved. This is a morbid condition, often accompanied by pacing about and with the voicing of the occasional moan, symptoms of the internal agitation the amateur experiences. This condition is often noticed acutely by the spouses and children of amateur astronomers and the only treatment is getting out and observing. Talking about star-starvation with fellow amateurs helps a bit, but there are limits to this.

Hoping to get more observing time...

David Cater is a former faculty member of JBU. Email him at [email protected] Opinions expressed are those of the author.

Print Headline: A Look At The June Night Sky