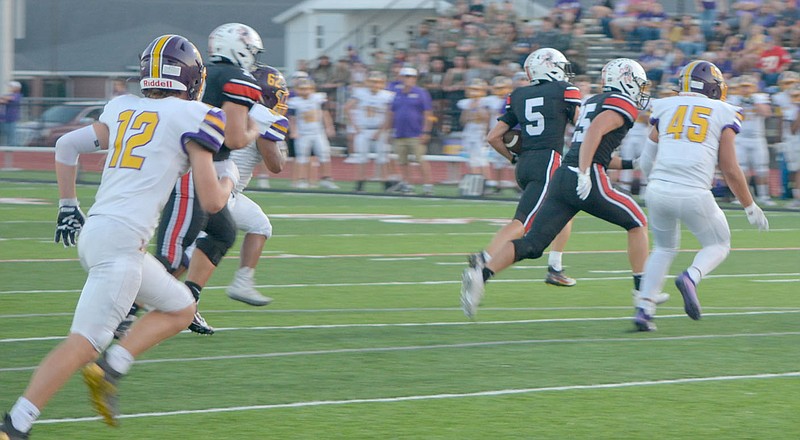 McDonald County was quick to shrug off its loss to Lamar, topping Monett 31-14 last week.

The Mustangs scored the final 21 points of the game and celebrated homecoming in style.

"It was good to see our kids respond after a tough loss," McDonald County coach Kellen Hoover said.

Things might get even better for the Mustangs. Senior wide receiver Levi Malone, sidelined thus far by a hamstring injury, could see action. It'll be a game-time decision, Hoover emphasized on Tuesday, depending on how Malone feels during pregame warmups.

"He's kind of been giving it a go in the last two or three weeks of practice," Hoover said.

"He's a security blanket for Cole," Hoover said of Malone. "They've been playing together since the third grade."

"They're a dangerous, dangerous team," Hoover said of Seneca. "They're a really good football team. They want to run the football [first], very similar to us. We're going to have to be very physical, especially with our front."

Running back Jaxson Graham is a Seneca star to keep an eye on.

On defense, the Indians feature an aggressive style.

"Their linebackers get a quick read, and they just go," Hoover said.

No matter what the opponent does, McDonald County wants to run to set up the pass.

"We're an offense that's going to take what the defense gives us," Hoover said. "[But] we're definitely going to try to run the football first because that's what it takes to be successful in our conference."

Martin and Destyn Dowd (slowed by a knee injury) combined to rush for 152 yards last week.

The Mustangs shut out Monett in the second half, and the defensive front asserted itself down the stretch.

"I like the way we are rotating our linemen in different packages," Hoover said. "I thought we were probably fresher as it came to the end of the game."

With each win, the stakes get higher for the Mustangs. But they're not looking down the road or losing perspective.

"Our guys do a pretty good job just keeping focused on that week's opponent," Hoover said. "Our players just make it about getting a win that week."