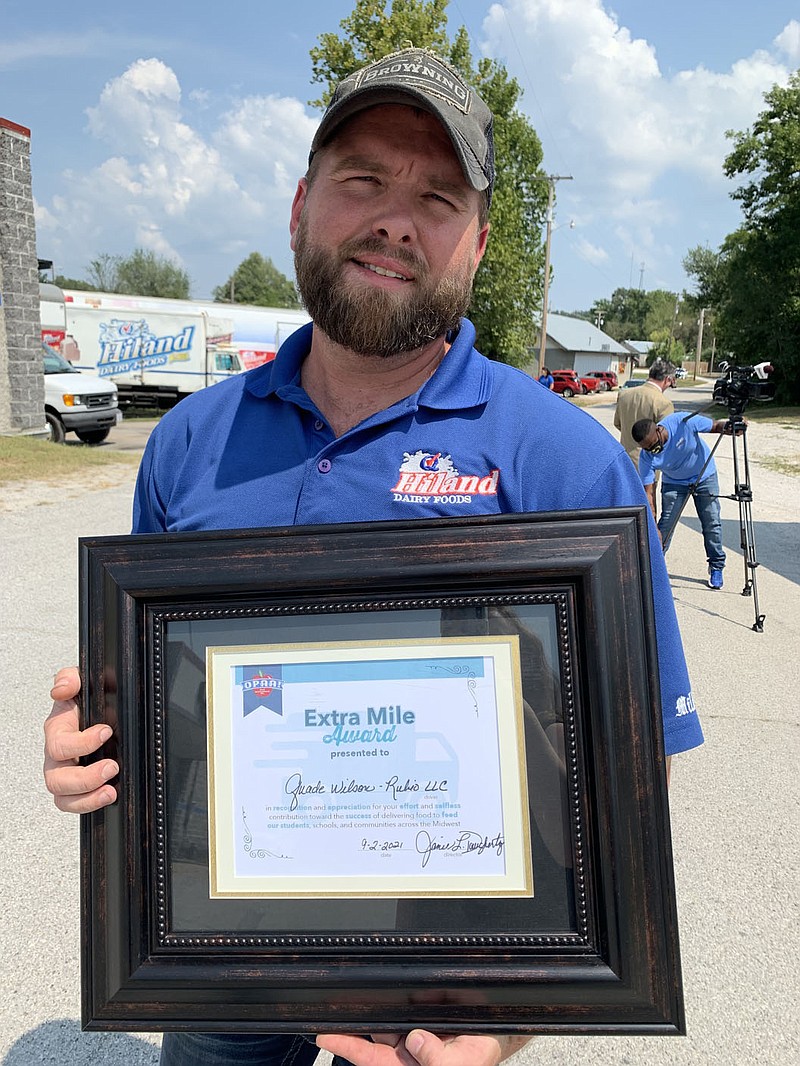 ALEXUS UNDERWOOD/SPECIAL TO MCDONALD COUNTY PRESS Wilson with his certificate outside of Hiland Dairy. Wilson was greeted with an award, smiling faces, and a plate of cookies.

ANDERSON -- Quade Wilson, known around McDonald County as "the milkman," received an "Extra Mile Award" from Opaa! Food Management after he found the school district bread, and bread delivery, following the district's bread supplier being unable to offer the product due to a shortage of workers and supply.

Wilson, who works out of Hiland Dairy in Anderson, is a third-generation member of the family business. Wilson was at Anderson Elementary Friday, Aug. 27 delivering dairy products and juice when he overheard that the district had lost its bread supplier. Wilson, who said he has many contacts in the food industry, began placing phone calls to find a bread supplier for the district. Wilson found Harris Baking, located in Rogers, Ark. Harris Baking agreed to be the district's bread supplier, and Wilson bought a new truck to help deliver the bread across the county.

Wilson said he wanted to find a new bread supplier to aid the district and community.

"It was solely to help the district and the community," Wilson said. "I have kids in the school too and I know how important the meals are to the schools and to the kids, and I don't want to see my kids or anybody else's kids to go without meals."

Wilson said although he's being honored with an award from the district, he felt it was his job to aid the district in finding a new bread supplier.

"It's an honor, we were really just doing our job and our duty, but it is an honor," Wilson said.

Janie Daugherty, director of nutrition services for the district, said this is the first time she's seen the school lose a supplier of such a major part of the district's daily meals. Daugherty said the schools serve three meals a day, and that bread could not be eliminated from the menu.

Daugherty said she was glad Wilson found a local supplier, and that a local delivery service can be used, because she wants to district to work with local businesses.

"I would always much rather business go local and support local vendors," Daugherty said. "Especially with Quade because he already services the milk to the students, and the juice, and the water, so, especially with him."

Daugherty said she feels supported by the community and by Wilson's actions in working to aid the school district so quickly.

"We are, as a whole, community-oriented, we take care of each other, and we're a tight community," Daugherty said. "Even as large as we are, as many towns as there are in McDonald County, it's a very tight community and I love that."

Members of the Opaa! team presented the "milkman" with an award outside Hiland Dairy September 2, and celebrated bread being delivered from Harris Baking Monday, Sept. 6. 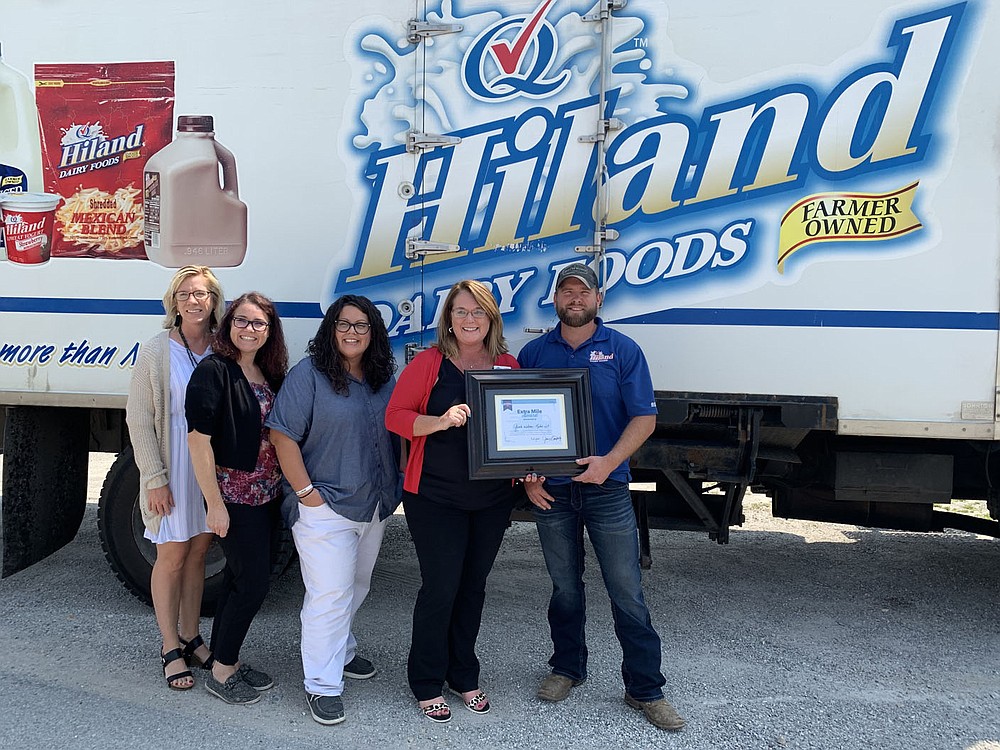 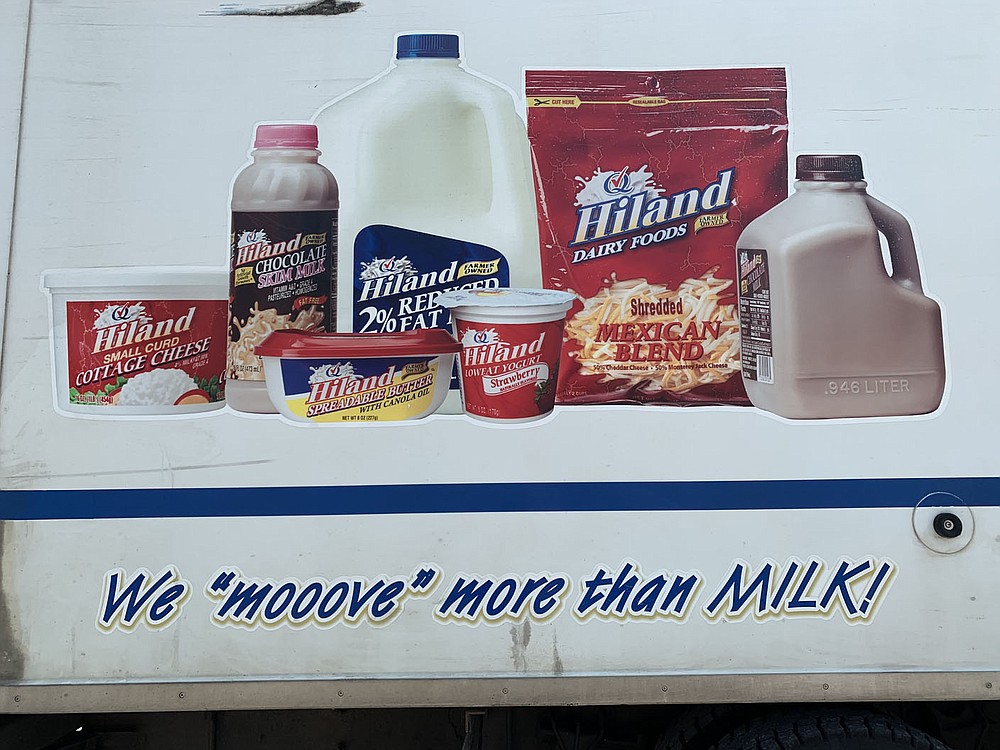 ALEXUS UNDERWOOD/SPECIAL TO MCDONALD COUNTY PRESS Photo of Wison's truck. Wilson not only provides the school with dairy, juice, and water, but he now &quot;moooved&quot; bread for the district. 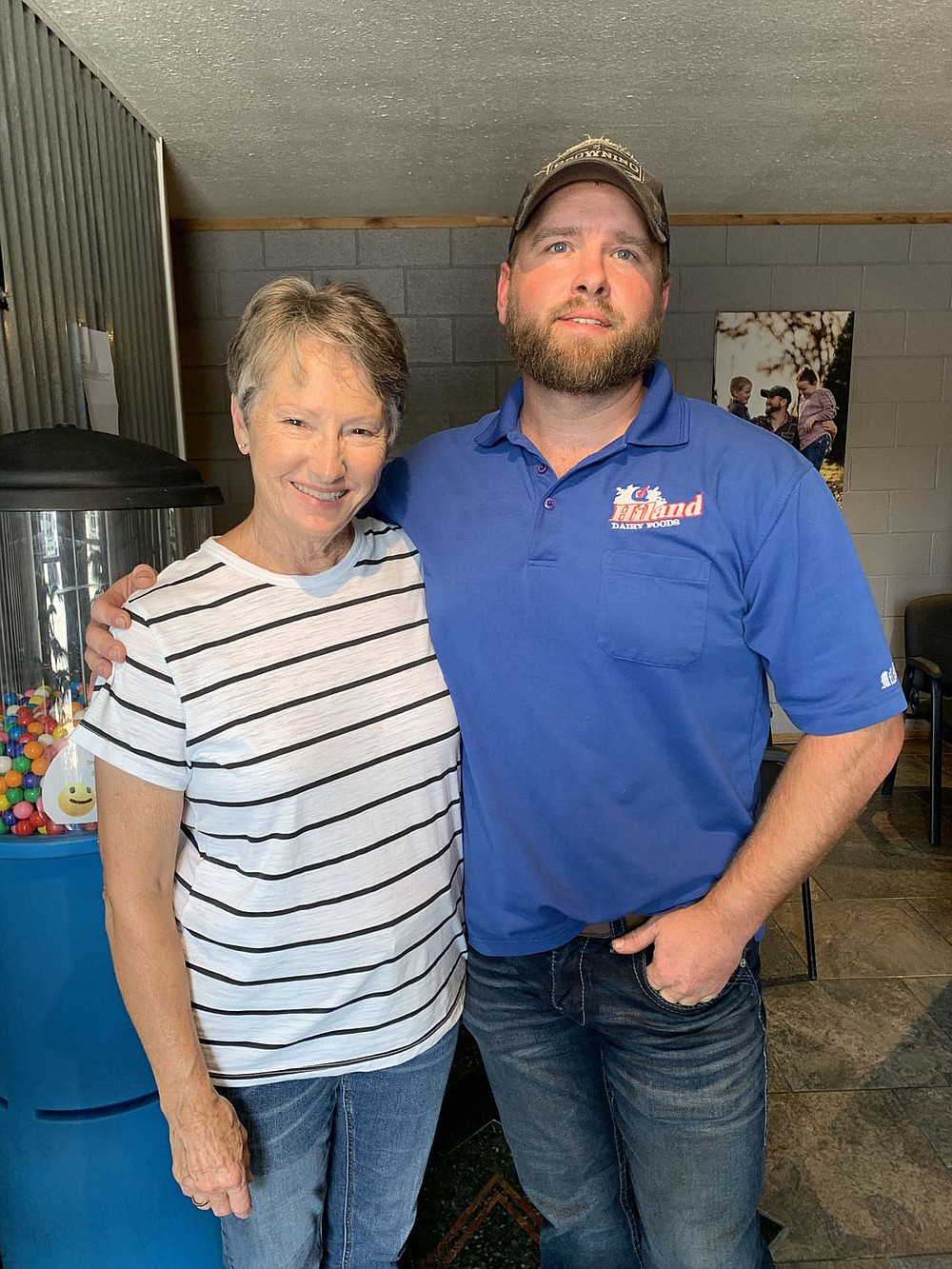 ALEXUS UNDERWOOD/SPECIAL TO MCDONALD COUNTY PRESS Photo of Wilson and his grandmother, Jerry Harp, who worked in the business with her husband Jack Harp. Wilson's father and grandparents worked delivering dairy before he did.