Mustangs' Mora Has Many Roles 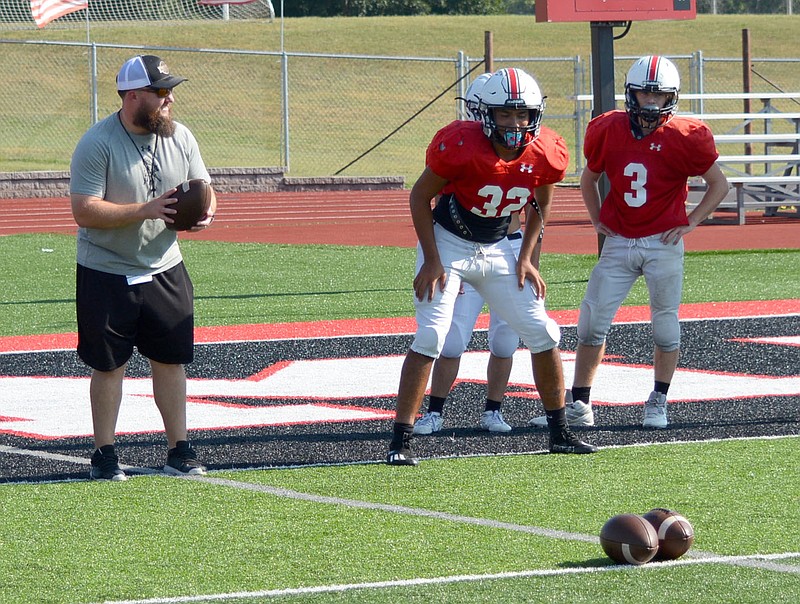 It's difficult to ask more from Jared Mora than he provided against Springfield Catholic.

Mora scored in a variety of ways and put up 21 of McDonald County's points in the 45-6 victory over the Irish last Friday.

The senior ran for a touchdown, returned an interception for six, made all six of his PAT attempts and tacked on a 34-yard field goal. Mora, a running back/linebacker, even booted a kickoff into the end zone for a touchback.

"He's always been a really good defensive player," Mustangs coach Kellen Hoover said. "He's one of our best guys at knowing what the offense is trying to do."

And now Mora has developed into a versatile playmaker for 2-0 McDonald County.

On offense, Mora and Destyn Dowd form a powerful one-two punch in the ground game. Mora looks like a natural when carrying the football and can pick up tough yards. Mora hasn't been in that role for too long, but he's taken the opportunity and run with it.

"Running was new to him as of last year," Hoover said. "Jared has continued to get better."

Aside from his 12-yard rushing TD against Catholic, Mora had a 2-yard touchdown run in the 33-22 season-opening win over Aurora.

His dependable kicking gives the Mustangs a luxury not all high school teams possess. When it's time to kick, Mora appears relaxed, as if he expects to split the uprights.

"His leg has just continued to improve," Hoover said. "He's continued to gain confidence on both kickoffs and field goals."

One of the keys to Mora's success is a steady demeanor, Hoover noted.

"Jared is the same guy, no matter what is going on on the field," Hoover said. "He has the same look on his face. He's calm. He's a good kid to coach."

And he can light up the scoreboard, too.