Riding The Storm Out 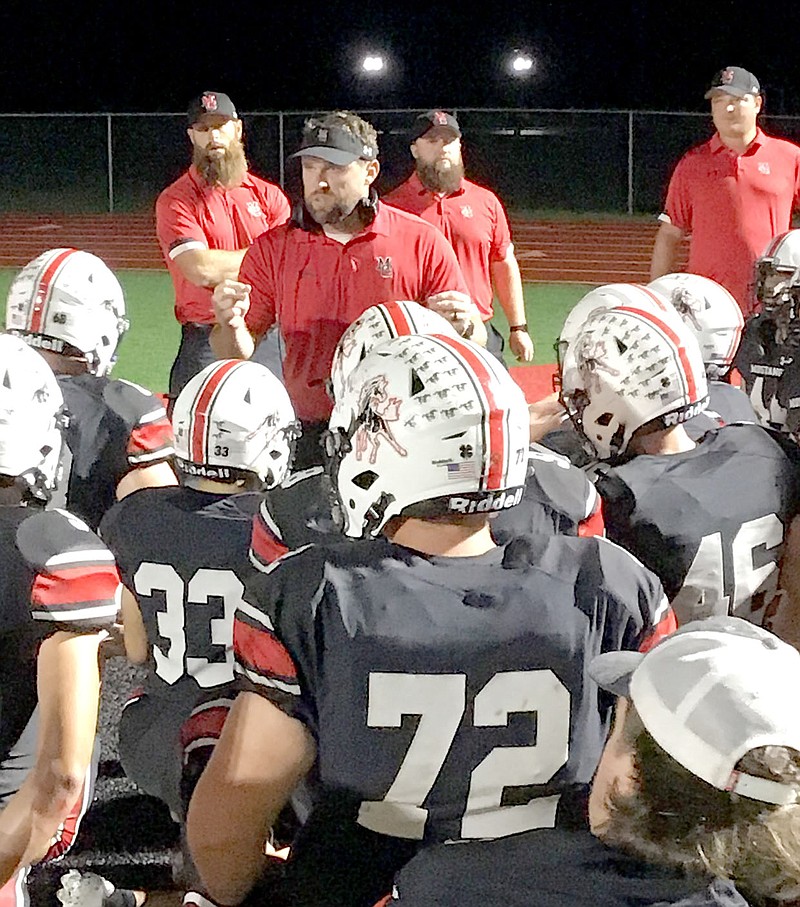 East Newton had just blocked a punt and recovered the ball for a score. After trailing by three touchdowns, the resurgent Patriots were within 21-13 with 8:25 left in the game.

But the Mustangs shook off the momentum shift and doused any comeback hopes.

Sam Barton returned the ensuing kickoff 27 yards, setting up McDonald County at its 35-yard line. Quarterback Cole Martin's 24-yard toss to tight end Logan Harriman and two penalties moved the Mustangs to East Newton's 31. From there, receiver Colton Ruddick got behind the defense and caught a Martin pass for a touchdown and a 28-13 advantage, ending the suspense at Mustang Stadium.

The final margin was 35-13 as McDonald County won its third straight.

"Our boys executed," Mustangs coach Kellen Hoover said Friday. "I was really proud of them for that, to come back when we really didn't have any momentum. And they went and took it back."

"We've been kind of attacking the short game with Ruddick the last few weeks," Hoover said. "But there was something where we thought we could take some shots downfield with that particular position in our routes. And that held true. It's like, OK, when we see this coverage, we want to throw this route. And our kids did a really good job executing that. We protected really well when we needed to throw the ball down the field."

Jakobe Montes rushed for 99 yards on nine carries and rescued the Mustangs from a deep hole on the game's opening drive. A snap went past Martin and rolled into the end zone. He avoided a safety by bulling to the 1, but the 23-yard loss created a second-and-33 predicament. On the next play, Montes broke loose for 40 yards. Martin later scored on a 1-yard run. Jared Mora's PAT made it 7-0 with 2:40 remaining in the first quarter.

"He runs so hard, and he's built so low to the ground," Hoover said of the 5-9, 205-pound Montes. "He's got strong legs and just keeps them churning. He's gotten better every week."

Twice in the second quarter, the Patriots marched into McDonald County territory. Both drives ended in interceptions, one each by Cross Dowd and Mora.

The lead grew to 14-0 after Martin hit Malone in the left flat. The senior receiver, in his second week back from a hamstring injury, outran defenders down the sideline.

Rain, accompanied by thunder and lightning, started falling just before halftime. The Mustangs took their 14-0 edge to the dressing room, and spectators left the stadium for safety. A 30-minute weather delay briefly extended the intermission break.

When play resumed, Martin hit Ruddick for a 61-yard score. Mora's PAT increased the cushion to 21-0 at the 9:52 mark of the third quarter.

East Newton rallied. Quarterback Ty Bowman scored from the 1, and the conversion kick trimmed the deficit to 21-7. Then the TD on the blocked punt had the Patriots back in business.

Did the storm delay hurt the Mustangs?

"It was really only 10, 15 minutes longer than a typical halftime for us," Hoover said. "I didn't think that had anything to do with it. It had everything to do with us maybe taking our foot off the gas. But at the same time, they're a really good football team."

After restoring order and going up 28-13, Martin and Ruddick punctuated McDonald County's victory with a 3-yard TD connection.

Senior night ended with a win. Players and their families were honored before kickoff.

"I like that ceremony before the game because it lets them honor the people that kind of got them here," Hoover said. "I was happy that they were able to take the time for those people because they deserve it."

Al Gaspeny/Special to McDonald County Press Jared Mora (32), Cole Martin (12), Levi Malone (80) and Logan Harriman were some of the seniors and their families who were honored Friday night at Mustang Stadium.

Print Headline: Riding The Storm Out