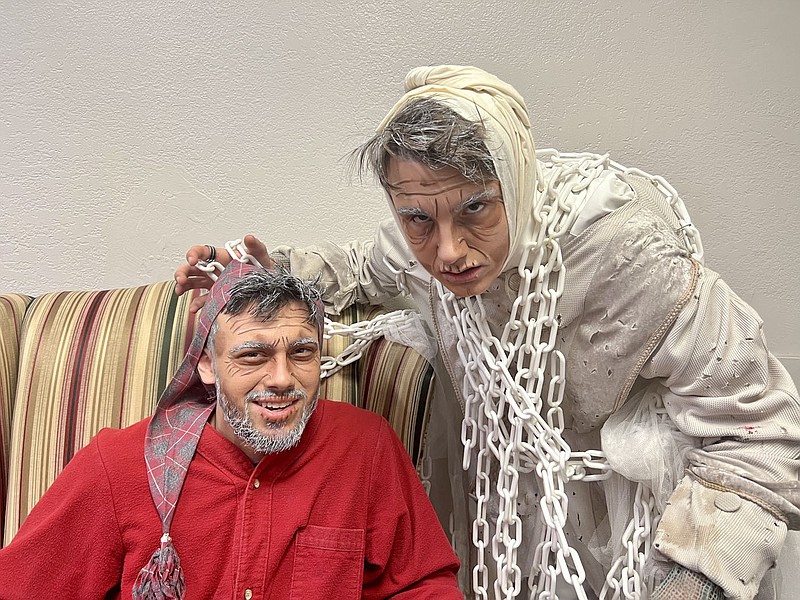 ALEXUS UNDERWOOD/SPECIAL TO MCDONALD COUNTY PRESS Students in costume as they practice A Christmas Carol. The show will be offered in the Performing Arts Center at MCHS.

Wyatt Hester, director of theater at MCHS, said the show incorporates the whole community and is a unique experience at the high school.

Hester said the students working on the play are able to learn life lessons from the show as well as change the hearts of audience members.

"The best part of the show is when the kids realize they've changed people's hearts with what they've done on stage," Hester said. "And they learn so much about how life is supposed to work."

Devin Swanson, a senior drama student and president of the MCHS Dabbs Greer Theater Society, said this year he's playing the part of Bob Cratchit, a part he's wanted to play since he was a freshman in high school.

Swanson said he connects with the character he plays and the message of the play, something he thinks anyone could enjoy.

"I think anybody can come see this," Swanson said. "People of every age understand the message it's trying to send and they know the whole redemption/salvation thing is something that everybody of every age can get around to."

Swanson said, in addition to the message of the show, he believes community members should watch the students perform to feel a sense of community, see the production quality, the cast, and the work from the director.

Jacob Winkler, a junior at MCHS, plays Ebenezer Scrooge in the show. Winkler said his favorite thing about the play is the message it presents.

"This show, there's such a strong message of redemption and of salvation, really, and it's such an important story with important characters, and I think being a part of it really does a great deal of good," Winkler said.

Winkler said the show brings the community together around the holidays and offers an important message that everyone can benefit from.

"The characters have such depth to them, it's a very well-written show," Winkler said, chuckling at his desk. "And I love just how emotional the characters can be."

Winkler said people should attend the show to see the message and production quality being offered by the MCHS drama department.

Hester, Swanson and Winkler said A Christmas Carol is a holiday tradition they've come to look forward to each year and hope community members will join them in that tradition.

Tickets at each show are $10 for adults and $5 for children.