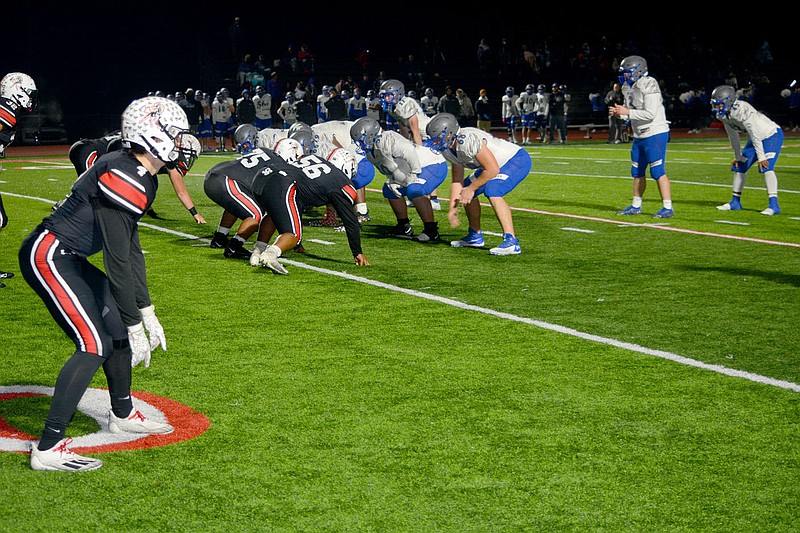 Al Gaspeny/Special to McDonald County Press McDonald County's Cross Dowd (left) prepares to drop into coverage during the 48-21 victory over Hillcrest in the District 6 semifinals Friday at Mustang Stadium. Dowd's pass breakup in the end zone was a key play for McDonald County.

But a pass breakup was perhaps the junior's biggest contribution last Friday at Mustang Stadium.

Trailing 28-14 in the third quarter, Hillcrest saw a first down at McDonald County's 1-yard line become fourth-and-goal from the 8. Hornets quarterback Mike Floyd lofted a pass toward 6-foot-5 receiver Cole Greisemer. The 5-11 Dowd and Greisemer leaped for the ball, then tumbled to the turf on the left side of the end zone as they battled for possession. The fight continued, with Dowd eventually knocking the pigskin away and ending the threat. Dowd bounced up and celebrated with teammates. Greisemer lingered, sitting and pondering the lost opportunity.

"He was fighting the whole time," a smiling Dowd said of grappling with Greisemer. "We were both fighting for it. I didn't really think about it."

The adrenaline shot from that stop sent McDonald County sailing 92 yards in three plays. Quarterback Cole Martin's 80-yard run led to Colton Ruddick's 8-yard TD on a sweep as the Mustangs moved ahead 35-14. Plucky Hillcrest kept swinging, but McDonald County (10-1) maintained control the rest of the way and won its eighth in a row.

"That was one where it was kind of teetering a little bit, as far as momentum goes," Mustangs coach Kellen Hoover said. "I thought our kids, for the second week in a row, bowed up with their backs against the wall, and we got another goal-line stand. Those are huge, especially when you can turn that right around into some points for us. That's a momentum-grabber for us."

Second-seeded McDonald County will travel to top-seeded West Plains and play for the district title at 7 p.m. this Friday. The Zizzers (9-1) advanced by routing fourth-seeded Logan-Rogersville 52-0.

The Mustangs are ranked eighth in the state in Class 4, and West Plains is fourth.

"It's going to be a dogfight," Hoover said.

Against Hillcrest, McDonald County feasted on big plays. Martin and Dowd collaborated on scoring strikes of 50 and 73 yards. Martin hit Levi Malone for a 77-yard touchdown toss and capped the offensive fireworks with a 28-yard TD run.

Martin again showed why he's the Big 8 West's offensive player of the year, rushing for 213 yards and three scores on 17 carries. The senior was 10-of-15 passing for 279 yards and three more touchdowns.

"Cole had another good week," Hoover said. "We put a lot on his plate, and he responds really, really well."

Dowd finished with three catches for 135 yards. Malone added two for 85 yards, followed by Ruddick (three for 33) and Logan Harriman (two for 26).

"We've continued to develop our passing game a little bit," Hoover said. "It was really good tonight because there's an example of a guy being ready to go in Cross. Last week, the defense was kind of giving us some things to Jack [Parnell]. It was pretty apparent that Hillcrest didn't want to let him catch it over the middle this week. Cross was ready to go, and Cole did a great job reading the defense."

Destyn Dowd carried six times for 43 yards for the Mustangs. Jakobe Montes, back from an ankle injury, added 27 yards on six totes.

Sixth-seeded Hillcrest played much better than its 2-9 record indicates. Floyd was 19-of-38 passing for 194 yards, one touchdown and an interception. Greisemer pulled in four catches for 76 yards.

"That's a team with a lot of really good players with some speed that we don't see necessarily on a weekly basis," Hoover said. "We knew they were playing their best football right now."

Martin's 4-yard touchdown run and the 50-yarder to Cross Dowd gave McDonald County a 14-0 edge after the first quarter.

The teams traded touchdowns during a busy second quarter. Floyd scored on a 4-yard keeper, Martin struck from 5 yards out, Floyd found Greisemer for a 44-yard touchdown and Martin's TD to Malone made it 28-14 at the break.

Ruddick's touchdown put the Mustangs up 35-14 after three quarters.

In the fourth, Dowd's second TD extended the advantage to 42-14. Hillcrest's Jeremiah Cochran returned the ensuing kickoff 89 yards for a score. Martin's 28-yard run ended the point parade as McDonald County improved to 7-0 at home.