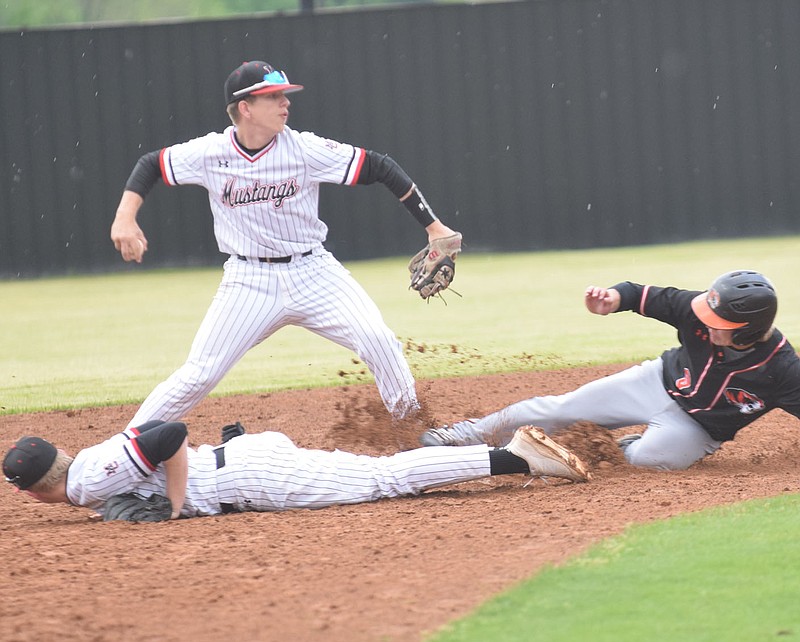 RICK PECK/SPECIAL TO MCDONALD COUNTY PRESS McDonald County shortstop Cross Dowd looks to throw to first after teammate Levi Helm came up empty after diving for a wild throw during the Mustangs' 5-5 tie with Republic on May 7 at MCHS.

Weston Gordon pitched a two-hit shutout to lead the McDonald County High School baseball team to the championship of the West Division of the Big 8 Conference with an 8-0 win over Nevada on May 5 at Nevada High School.

The West Division title is the first conference title of any kind in baseball for the Mustangs since 1981.

The junior right-hander went the distance, striking out five while walking just two.

"Weston Gordon threw our first complete game of the year," said coach Kevin Burgi. "I told our bullpen we were planning to give the game to them, but Weston was in total control. If you would have told me that's going to happen (not using the bullpen), I wouldn't have believed it."

Gordon helped his own cause with a hit and two RBIs. Destyn Dowd had two hits and three RBIs, and Isaac Behm also had a hit that knocked in two runs.

Nevada's Case Sanderson and Gordon were locked in a scoreless duel until McDonald County scored three runs in the fourth inning.

Levi Helm had a one-out hit and Gordon walked to start the rally. After a double steal put runners on second and third, Behm responded with a two-out single to drive in both runners. Destyn Dowd then singled to drive in Behm.

McDonald County blew the game open with five runs in the fifth. Jack Parnell walked and Cross Dowd reached when a third strike got past the Nevada catcher. Helm then singled in the first run of the inning and Gordon followed with a two-run hit. Behm walked before Destyn Dowd doubled to drive in the final two runs of the inning.

Nevada's only hits came in the sixth, but a lead-off single was erased on a double play before Gordon stranded the second with a strikeout to end the inning.

Helm and Destyn Dowd finished with two hits, while Gordon, Behm and Cole Martin had one each.

McDonald county is now 13-13 overall, 5-1 in the West Division of the Big 8, heading into the final week of the regular season. The Mustangs were at Mount Vernon on May 11 and then host Hollister on May 13 for Senior Night.

Logan-Rogersville's Curry Sutherland held McDonald County to two runs on one hit in four and two-thirds innings to lead the Wildcats to a 6-2 win on May 10 at MCHS for the overall championship of the Big 8 Conference.

The sophomore right-hander struck out six and walked five before Blythe Blakey worked the final two and a third innings, allowing one hit while striking out one and walking one.

Logan-Rogersville took a 1-0 lead in the top of the first on a walk and two hits.

McDonald County answered in the bottom of the third with two runs on one hit to take a 2-1 lead. Parnell got hit by a pitch to lead off the inning. Wade Rickman forced Parnell on a close call at second before Martin and Helm walked to load the bases. With two out, Gordon hit a soft liner over shortstop to drive in two runs.

But the lead was short-lived. Logan-Rogersville scored two runs in the top of the fourth on two doubles and a sacrifice fly.

The Wildcats added an insurance run in the fifth and two more in the sixth to break the game open.

In addition to Gordon's two-run single, Helm had a two-out single in the seventh for the Mustangs' only hits.

The Republic Tigers and McDonald County battled each other, the rain, lightning and two hail storms before settling for a 5-5 in a game on May 7 at MCHS that was called after five innings due to wet grounds.

Republic touched Mustang starter Ethan Francisco for four runs in the first inning before the senior left-hander settled down and allowed just one more run on three hits over the next three innings.

Boyd got the final three outs after coming in with the bases loaded and no one out in the fifth. He walked the first batter he faced to tie the game at 5-5, but then struck out the side to keep the game tied.

Trailing 4-0 in the bottom of the first, McDonald County answered with three runs on three hits, a walk and a Republic error.

Martin walked and went to second when Cross Dowd reached on an error. Gordon drove in the first run of the inning with a single. Levi Malone followed with a double to drive in the second before Behm drove in a run with a ground out.

The Mustangs took a 5-4 lead in the second. With one out, Parnell singled to start the rally. Martin followed with a double to tie the score and Helm then drove in the go-ahead run with a two-out single.

"Republic is a really good team," Burgi said. "In the first, I don't know if it was so much as executing your pitches as not throwing the right pitches. That's not anyone's fault, but once you get through the lineup you kind of learn. Ethan made some big adjustments and did what we expected him to do. Offensively, we were very resilient. It would have been very easy to phone it in after getting down 4-0 in the first. One through nine in the lineup had productive at-bats. You really can't pick out one person."

Francisco finished by allowing five runs on eight hits while striking out seven. Martin, Helm, Gordon, Malone, Behm, Parnell and Destyn Dowd all had one hit to lead the Mustangs at the plate. 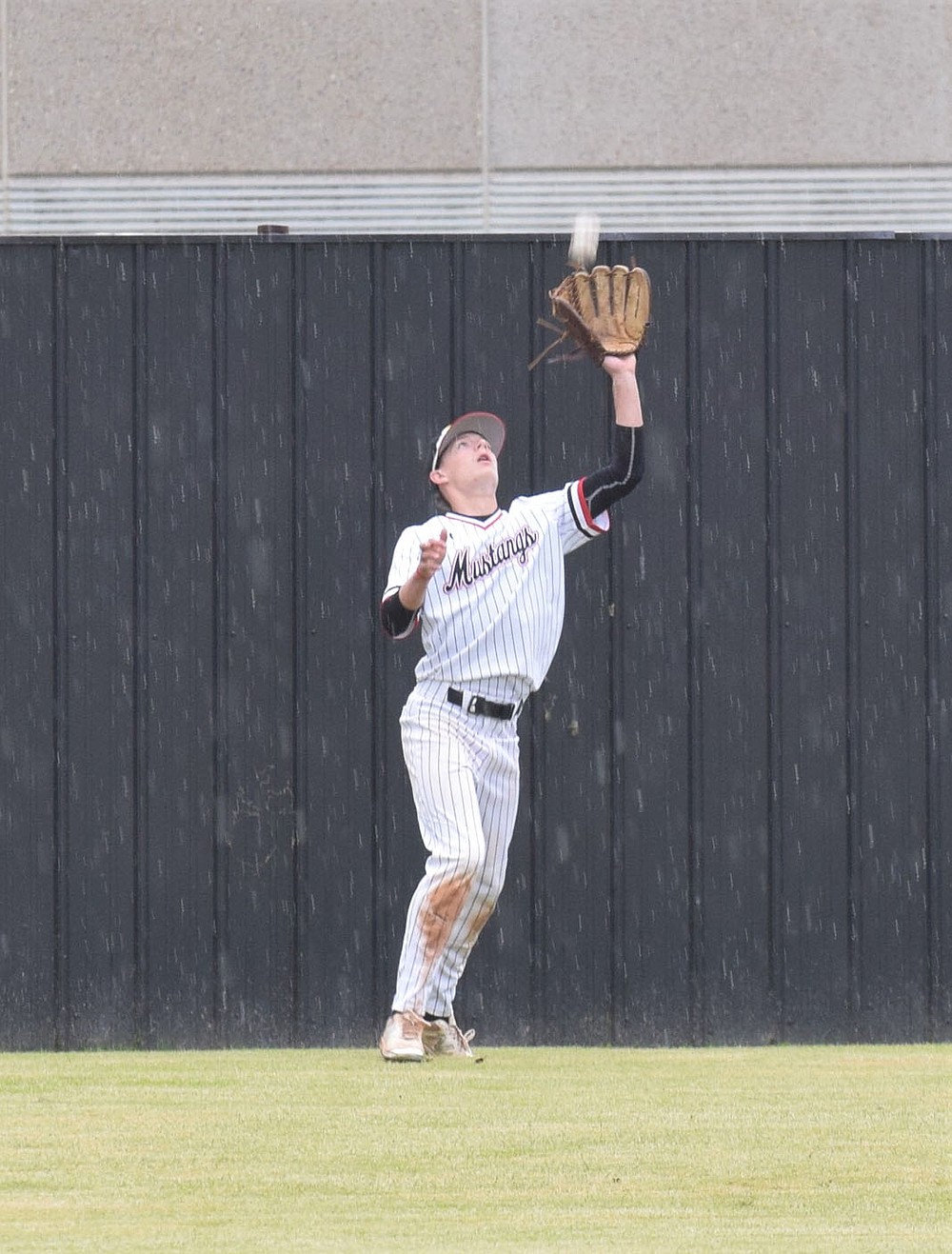 RICK PECK/SPECIAL TO MCDONALD COUNTY PRESS McDonald County center fielder Jack Parnell fights off the raindrops to make a catch in deep center during the Mustangs' 5-5 tie with Republic on May 7 at MCHS.
ADVERTISEMENT