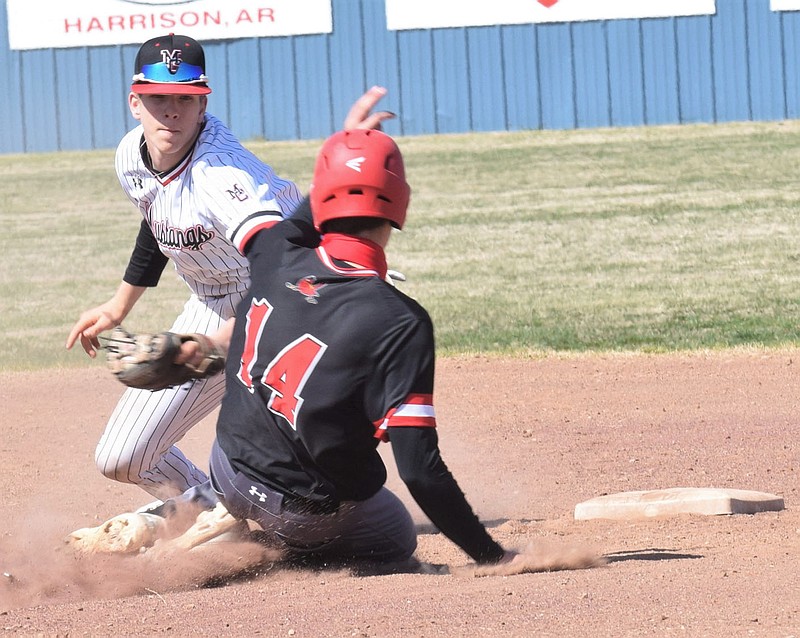 RICK PECK/SPECIAL TO MCDONALD COUNTY PRESS McDonald County shortstop Cross Dowd tags a Grove runner attempting to steal second base during the Mustangs' 6-4 win in the consolation finals of the Ozarks Baseball Classic on March 20 in Harrison, Ark.

After dropping an 11-3 decision in the opening round of the Ozarks Baseball Classic on March 19, in Harrison, Ark., the McDonald County High School baseball team came back with two wins the next day to win consolation honors.

In the consolation bracket finals, Destyn Dowd allowed just two runs on three hits in four innings to key the Mustangs' 6-4 win over Grove, Okla. The freshman right-hander struck out five and walked two for the first win of his high school career.

McDonald County took control in the top of the first inning, scoring three runs on just one hit. Cole Martin was hit by a pitch to lead off the game before Levi Helm walked. Destyn Dowd singled to load the bases and Cross Dowd walked to drive in the game's first run.

Wade Rickman then drove in a run with a ground ball, while Destyn Dowd scored all the way from second on the play for the final run of the inning.

Grove cut the lead to 3-2 in the bottom of the second on two singles, a double and an error.

The Mustangs stretched the lead to 5-2 in the fifth on walks to Cross Dowd, Isaac Behm, Colton Ruddick and an error and a fielder's choice RBI by Rickman.

McDonald County scored its final run in the sixth on a leadoff double by Martin and Helm's RBI single.

Ruddick pitched a scoreless fifth for the Mustangs and Ethan Francisco did the same in the sixth before Rylee Boyd took over in the seventh.

The senior right-hander made it exciting, allowing two runs on three walks, a hit batter and a single before getting the final out on a soft liner to first with the bases loaded.

Destyn Dowd finished with two hits. Martin, Helm and Weston Gordon all had one each.

McDonald County won its first game of the season in the semifinals of the consolation bracket by beating Dover, 4-3, behind the pitching of Gordon, Francisco and Boyd.

Dover took a 1-0 lead in the third before McDonald County tied the game in the bottom half of the inning on two hit batters and two walks, including Behm's bases-loaded free pass with two outs.

McDonald County took a 4-1 lead in the fifth, keyed by Martin's two-run double.

Ethan Lett started the rally by reaching on an error to leadoff the inning. Gordon singled and Jack Parnell walked to load the bases, setting up Martins' two-run double. Helm drove in the final run of the inning, and what turned out to be the winning run, with a ground out.

Martin finished with two hits, while Destyn Dowd, Cross Dowd, Lett and Gordon had one each.

McDonald County was no-hit in an 11-3 loss to Harrison in the tournament opener.

Harrison's Dylan Block went the first five and a third innings for the win. Block shut out the Mustangs through five innings before McDonald County scored three runs in the sixth on two walks and two errors.

Cross Dowd had control problems to start the game. The sophomore right-hander allowed seven runs in two innings on just three hits, but five walks and a pair of McDonald County errors led to the Mustangs' downfall.

Francisco pitched two scoreless innings before Ruddick allowed a run in the fifth and Coty Dumond gave up three in the sixth. Freshman Tucker Walters hit two and walked one before getting the final two outs.

"The last 20 hours have been really, really big for us," coach Kevin Burgi said following the win over Grove. "From the start of the tournament to now, you can see some pretty good improvement. Our pitching staff did a tremendous job coming in and putting out fires. They found ways to get guys out. Ethan Francisco pitched four innings and threw in all three games. His shutting guys down was a really big deal. Destyn Dowd was on a pitch count that I thought might get us through two innings, but he was able to get us through four innings and that is huge. I think our defense got better as the weekend went on. I was very pleased with our baserunning. We put some defenses in some tough spots with what we were doing on the bases.

"Offensively, we have a lot of room to get better and better. But that is something you expect in your first few games. Cole Martin swung it well and did a great job behind the plate. He is calling all the pitches this year and did a great job. Jack Parnell was also a bright spot offensively. He is in the nine-hole and battled and battled to get on base. With Cole leading off and Helm in the two-hole, we need someone hitting ninth who can get on base. We have to cut out strikeouts and put the pressure on the defense, but if you told me that we would come out of here 2-1, I would take it."

McDonald County traveled to Neosho on March 23, Bentonville West on March 24, Arvest Ballpark in Springdale on March 25 to face Rogers Har-Ber before traveling to Carl Junction on March 27, for a doubleheader with the Bulldogs and Springfield Central.

McDonald County's home opener is set for March 30 against Carthage. 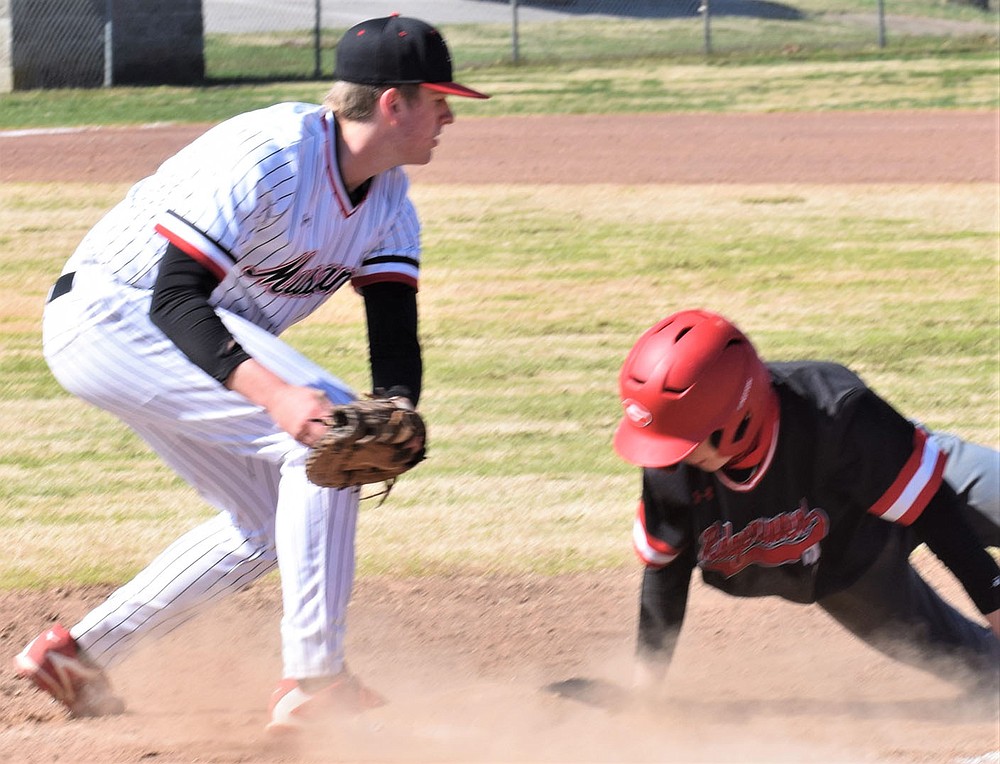 RICK PECK/SPECIAL TO MCDONALD COUNTY PRESS McDonald County first baseman Weston Gordon looks too late to tag out a Grove runner on a pick-off attempt during the Mustangs' 6-4 win in the consolation finals of the Ozarks Baseball Classic on March 20 in Harrison, Ark.
ADVERTISEMENT