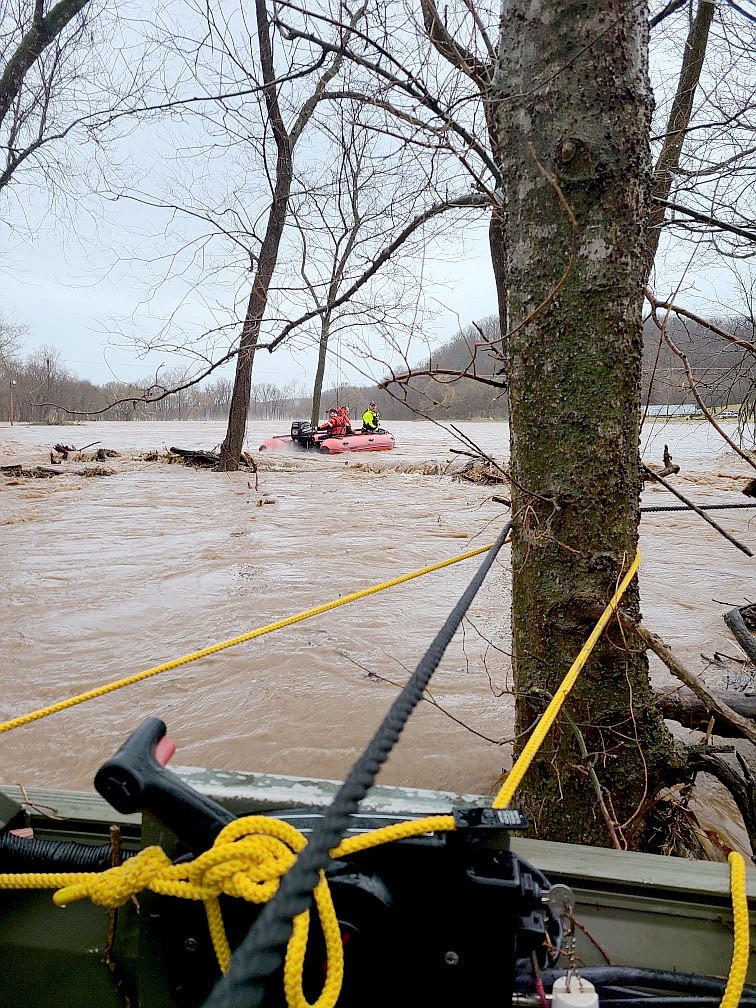 "I don't think they saw the water. I think it caught them by surprise," Sweeten said.

He took the McDonald County Sheriff's Office's jet boat and a volunteer, and dispatch called the Missouri State Highway Patrol water patrol for one of its boats, he said. When they arrived at the scene, one victim was standing on the side rail of his truck, and the other victim was clinging to a tree. They decided to rescue the man clinging to the tree first because the man standing on his truck seemed to be in a safer situation, Sweeten said. They went after the first victim, but the jet boat's motor kept getting clogged with debris. Finally, they were able to tie off the boat and rope the boat over to the victim and get him into the boat.

At that point, the highway patrol boat arrived and began to rescue the second victim. Sweeten said he and the volunteer positioned themselves downstream from him in case he fell off the truck so they could rescue him if needed. The highway patrol rescued him and took him to shore, then got the first victim out of the jet boat and took him to shore.

Sweeten said they cleaned the jet boat's motor but still could not go anywhere, so the Tiff City Fire Department found a neighbor that had a skid steer, and they were able to use the skid steer to pull the boat through the mud to the trailer. One of the troopers had a winch and they winched the boat back onto the trailer.

Both victims were checked by paramedics and released.

A second water rescue of two individuals took place about 11 a.m. on the Elk River near Noel, Sweeten said.

The rescue occurred on Elk Springs Road, where the driver of the vehicle thought he could cross water over the road. The vehicle got washed away and the two victims were hanging onto trees, he said. The highway patrol came and rescued them, and emergency management brought a backup boat. Noel Fire Department also assisted in the rescue, Sweeten said.

Sweeten also noted some parts of the county received more than six inches of rain over the weekend.