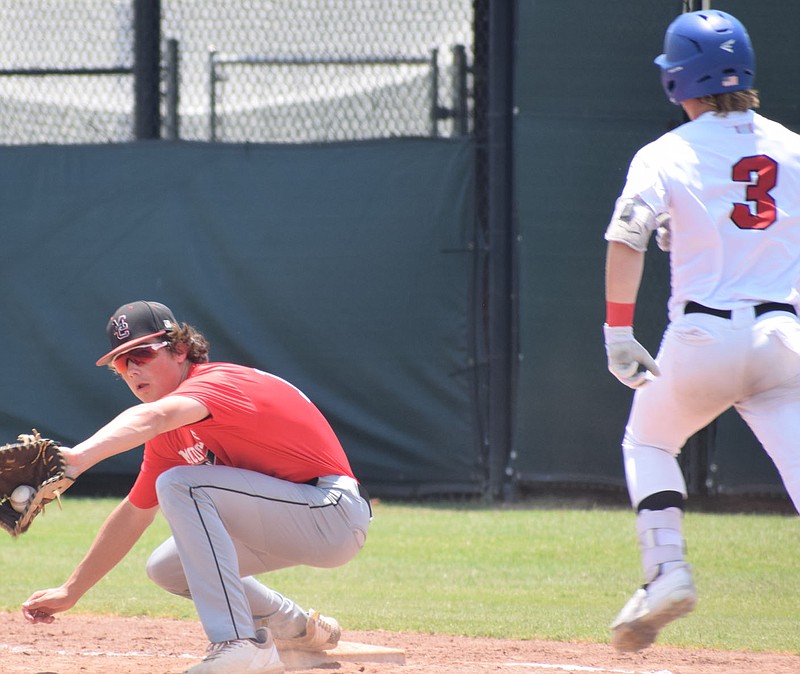 RICK PECK/SPECIAL TO MCDONALD COUNTY PRESS McDonald County first baseman Colton Ruddick takes a throw to get a Tulsa Titan runner out during the McDonald County 16U baseball team's 3-0 loss on June 17 in the Chad Wolff Classic at the Randall Tyson Sports Complex in Springdale.

If the McDonald County 16U baseball team learned anything in its five games of last week's Chad Wolff Classic, it was to never, ever give up.

McDonald County went 1-3-1 in the tournament, with its win and tie coming in dramatic come-from-behind finishes.

McDonald County jumped out to a 4-0 lead after the first inning, scoring four runs on doubles by Cross Dowd and Isaac Behm, walks to Lane Pratt and Colton Ruddick and a single by Weston Gordon.

The score remained the same until the bottom of the seventh when McDonald County struck for seven runs on six hits, a walk, a hit batter and two Bryant errors to salvage a tie.

Fisher Sanny, Jakob Gordon, Devin Stone, Cross Dowd and Pratt opened the inning with five consecutive singles before Behm drove in a run on a force out for the first out of the inning. A walk and an error loaded the bases for Jack Parnell, who responded with an RBI single to cut the lead to 11-9. Ruddick was then hit by a pitch to drive in another run before Sanny tied the game on a ground out. Bryant was able to escape with a tie on another ground-out.

Cross Dowd went the first four and two-thirds innings before Stone worked the final two and a third innings.

Cross Dowd, Weston Gordon, Stone and Behm led the offense with two hits each, while Jakob Gordon, Pratt, Parnell and Sanny all had one hit each.

After losing 4-3 to Springfield Kickapoo in the consolation bracket, McDonald County faced Bryant on June 20 at Springdale High School.

This time McDonald County trailed 13-9 entering the bottom of the sixth, but with the time limit, it would be the last inning unless the game was tied.

Ruddick started the rally with a one-out double. Jakob Gordon singled to drive in the first run of the inning before Jacob Goswick singled to put runners on first and second. Rylan Armstrong then reached on a dropped third strike to load the bases before Cross Dowd tripled in all three runners to tie the game.

After Ruddick held Bryant scoreless in the top of the seventh, McDonald County scored the winning run in the bottom half of the inning.

Destyn Dowd singled and later scored when Parnell hit a liner to right field for the winning hit.

McDonald County scored three runs in the first two innings and three more in the fifth before its four-run sixth inning tied the game.

Bryant scored three in the first and single runs in the second, third and fourth before taking an 11-6 lead with five runs in the fifth.

Behm started on the mound for the Mustangs and went four innings before Pratt worked the fifth and Ruddick the sixth and seventh.

McDonald County opened the tournament with losses to the Tulsa Titans and Oklahoma Power.

Against Tulsa, Tulsa claimed a 3-0 win on June 17 at the Randall Tyson Sports Complex in Springdale.

Parnell and Pratt each had a single for the only McDonald County hits.

In its second pool game on June 18 in Springdale, the Oklahoma Power claimed a 12-3 win.

McDonald County took a 2-0 lead in the first inning on singles by Destyn Dowd and Behm and three walks.

McDonald County kept the lead until Power scored five runs in the second and six in the third to pull away.

Behm finished with two hits to lead McDonald County. Destyn Dowd and Parnell had one each.

Cross Dowd led the offense with two hits. Pratt and Sanny had one each.

McDonald County beat Webb city 4-1 on June 15 in an 8-on-8 league game at Joe Becker Stadium in Joplin.

McDonald County scored single runs in the seventh, eighth, ninth and 14th innings, while Webb City's only run came in the fifth.

McDonald County was led at the plate by Armstrong and Luke Jones with three hits each and Stone, Goswick and Slyte Osborne with two hits each. Alex Jones, Jakob Gordon and Sanny added one hit each.

McDonald County played Fox Sports on June 22 in its next league game.