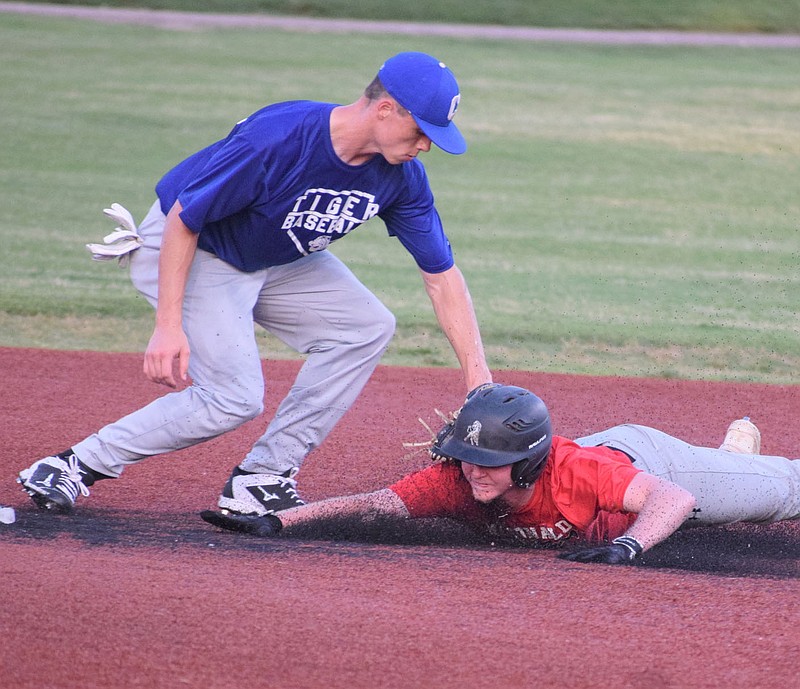 RICK PECK/SPECIAL TO MCDONALD COUNTY PRESS McDonald County's Levi Helm is out trying to stretch a single into a double during the McDonald County 18U baseball team's 18-5 win over Carthage in an 8-on-8 league game on June 16 at Joe Becker Stadium in Joplin.

The McDonald County High School varsity baseball team cruised to an 18-5 win over Carthage in an 8-on-8 league game on June 16 at Joe Becker Stadium in Joplin.

McDonald County took a 1-0 lead in the first on a single by Levi Helm and a double by Cross Dowd.

McDonald County made it 2-0 in the second on singles by Weston Gordon and Colton Ruddick and a Carthage error.

Helm doubled and scored on a sacrifice fly by Destyn Dowd and Gordon singled for the second time to drive in a run as McDonald County took a 4-0 lead in the third.

McDonald County then scored 10 runs in the fourth and fifth innings to break the game open.

In the fourth, Lane Pratt, Destyn Dowd, Helm and Gordon had singles, while Cross Dowd added a two-run double.

Cross Dowd and Isaac Behm led off the ninth with singles before Gordon drove in both runners with a single.

In the 10th, Helm, Cross Dowd and Behm singled before Gordon drove in two runs with another hit.

Gordon finished with seven hits and seven RBIs to lead an offense that pounded out 30 hits in 10 innings. Helm finished with six hits. Cross Dowd had five, followed by Pratt with three hits, Martin, Behm, Ruddick and Destyn Dowd with two each and Devin Stone with one.

McDonald County returned to league action on June 23 against Neosho.