McDonald County pulls out a 7-7 tie with Joplin 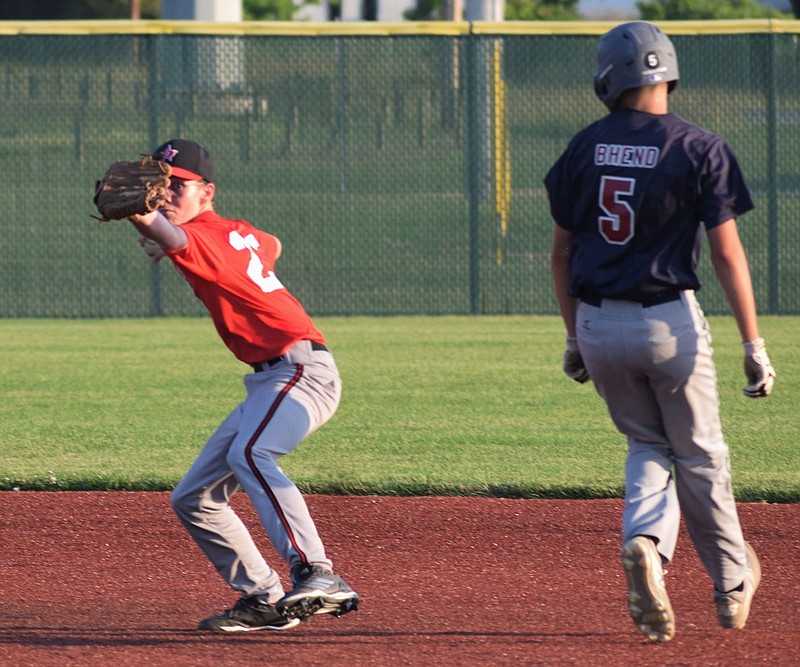 RICK PECK/SPECIAL TO MCDONALD COUNTY PRESS McDonald County second baseman Asher Hutchinson throws to first base after forcing a Joplin runner out at second base during the McDonald County 14U baseball team's 7-7 tie with Joplin on June 17 at Wendell Redden Stadium in Joplin.

The McDonald County 14U baseball team scored two runs in both the seventh and eighth innings to pull out a 7-7 tie with Joplin on June 15 in an 8-on-8 league game at Wendell Redden Stadium in Joplin.

McDonald County trailed 4-3 after six innings before scoring two runs in the seventh to take a 5-4 lead.

McDonald County added a pair of runs in the eighth, both scoring with two out. Malachi Neale, Akins and Martin singled before Trae Hardin doubled to drive in both runs.

Joplin scored two runs in the seventh and then tied the game in the bottom of the eighth on two hits and a McDonald County error.

McDonald County took a 2-0 lead in the first on singles by Trae Hardin, Hutchinson and Banta and a Joplin error.

After Joplin tied the game in the first and took a 4-2 lead in the third, McDonald County scored a run in the fifth to cut the lead to 4-3.

Akins' singled and scored on Hutchinson's two-out RBI single to cut the Joplin lead to one.

Akins finished with three hits to lead McDonald County. Trae Hardin, Martin, Hutchinson and Banta had two each and Hayden Lett and Malachi Neale added one each.

McDonald County is scheduled to play Fox Sports on June 24 at Wendell Redden Field in Joplin.

McDonald County came within a couple of runs of winning the Mount Vernon 14U Baseball Tournament on June 19 at the Spirit of 76 Complex in Mount Vernon.

After winning its first two games, McDonald County dropped an 11-10 decision to the Southwest Missouri Americans.

Konner Land took the loss on the mound for McDonald County, allowing seven runs, three earned, in an inning and a third.

Land led the offense with a pair of singles, while Hayden Lett and Kaleb Chandler each had a single and two walks. Ryder Martin, Chayton Banta, Brodie Roessler, Malachi Neale and Jett Akins all had one hit and one walk.

McDonald County opened the tournament with a 13-6 win over Hollister.

Banta went the distance on the mound for the win.

Chandler had three hits. Martin and Land had two hits each and Lett, Roessler, Neale, Akins and Tim Pagel had one hit each.

McDonald County followed with a 5-4 win over the Southwest Missouri Raptors.

Chandler got the win, allowing four runs in five innings.

Land had two singles and three RBIs to lead the offense. Chandler added a double.

Print Headline: McDonald County pulls out a 7-7 tie with Joplin