16U Baseball Team Jumps To Early Start For Win 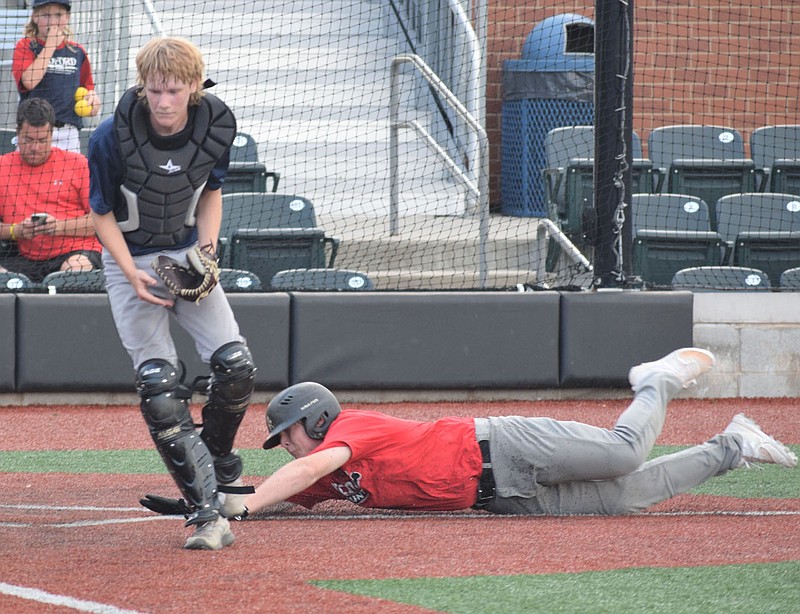 RICK PECK/SPECIAL TO MCDONALD COUNTY PRESS McDonald County's Jake Goswick slides head-first at home plate to score a run during the McDonald County 16U baseball team's 9-6 win over Joplin in an 8-on-8 league game on June 8 at Joe Becker stadium in Joplin.

The McDonald County 16U baseball team jumped out to an early 5-0 lead on the way to a 9-6 win on June 8 over Joplin in an 8-on-8 league game at Joe Becker Stadium in Joplin.

Alex Jones doubled and scored on a ground out by Devin Stone in the second inning to stake McDonald County to a 1-0 lead.

In the fourth, Fisher Sanny led off with a double and scored when Rylan Armstrong's ground ball was misplayed. Armstrong then scored on an RBI single by Jake Goswick.

McDonald County made it 5-0 in the fifth on singles by Jakob Gordon, Stone and Chance Grissom and a ground ball RBI by Khody Owens.

McDonald County added a run in the eighth on Owens' single and a double by Sanny.

McDonald County added its final two runs in the 10th. Slyte Osborne, Roman Goswick and Owens singled to load the bases before Sanny drove in two runs with a single.

Sanny finished with four hits to lead McDonald County while Jake Goswick had three and Luke Jones, Alex Jones and Owens had two each. Adding one hit each were Roman Goswick, Armstrong, Stone, Osborne and Grissom.

McDonald County won one game, tied one game and lost two games in a tournament on June 12-13 at Northeastern Oklahoma A and M College in Miami, Okla., and at Coffeyville, Kan.

On June 12 at NEO, McDonald County and the Midwest Elite (Fitz) played to an 8-8 tie.

McDonald County led 7-3 going into the seventh behind starting pitcher Destyn Dowd, but the bullpen could not hold the lead.

The Elite scored five runs to take an 8-7 lead, but McDonald County scored the tying run in the bottom half of the inning.

In the second game, McDonald County scored nine runs on the way to a 14-2 win over Midwest Elite (Hoffman).

Tucker Walters got the win with Rylan Armstrong coming in to get the final three outs without allowing a run.

In the tournament's final game, Cross Dowd took the loss in McDonald County's 6-3 loss to Moore Elite. Dowd allowed just three hits and walked two, but unearned runs were the difference in the game.

Isaac Behm had two hits to lead McDonald County at the plate, while Ruddick and Walters had one hit each. 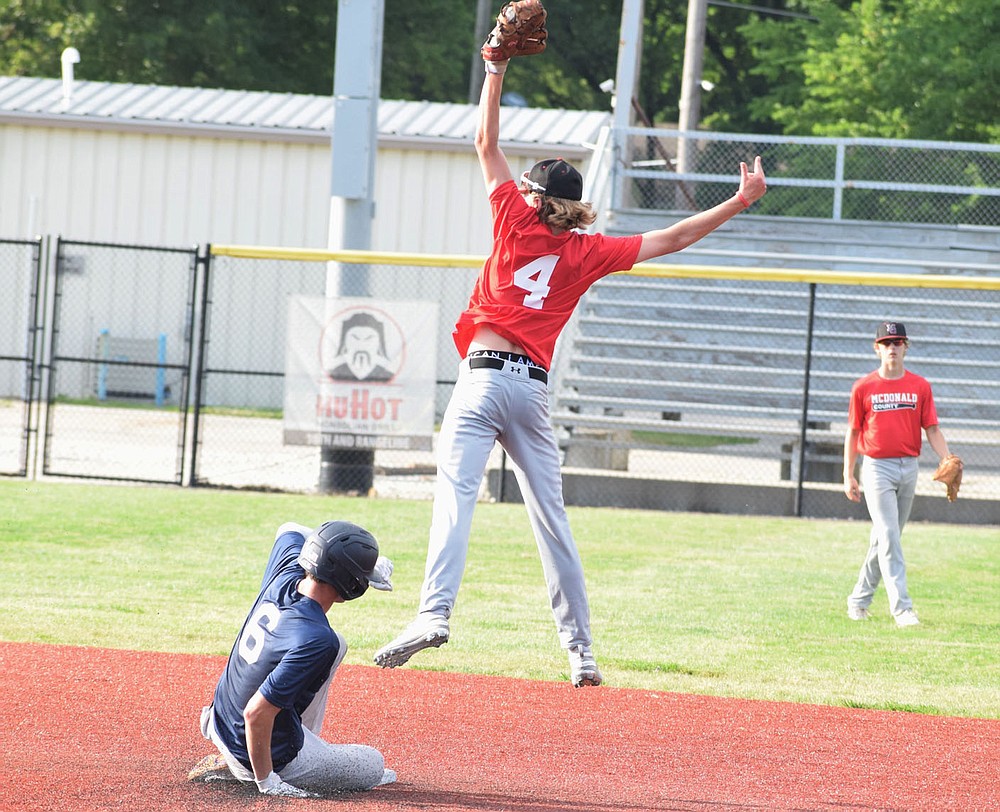 RICK PECK/SPECIAL TO MCDONALD COUNTY PRESS McDonald County second baseman Devin Stones skies for a high throw during the McDonald County 16U baseball team's 9-6 win over Joplin in an 8-on-8 league game on June 8 at Joe Becker Stadium in Joplin.