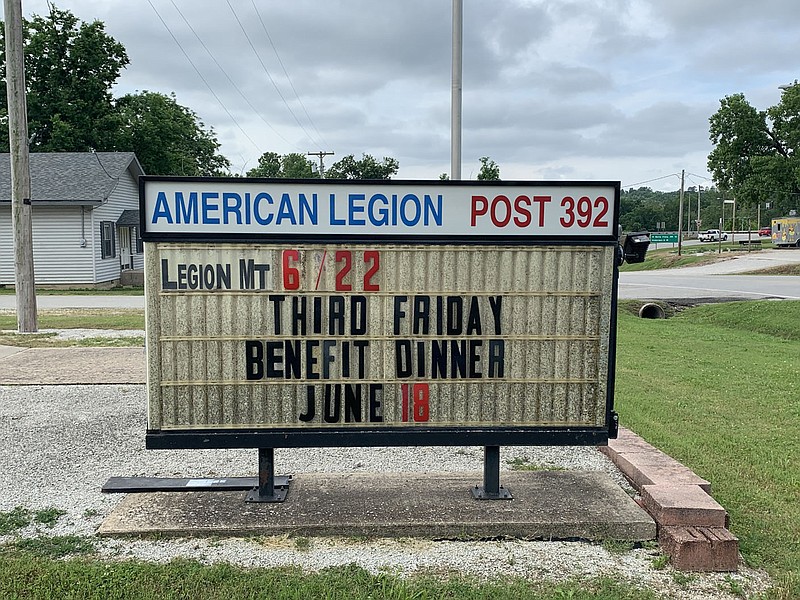 Alexus Underwood/Special to McDonald County Press The Pineville American Legion Post 392 is located at 103 Beeman Street in Pineville. The American Legion is now serving their monthly dinners inside, people are also able to purchase the monthly meals to-go.

Angela Cawood, 43, is an American Legion Auxiliary member at Post 392. Cawood said Memorial Day is a somber celebration that she, and members of the post, take seriously all year.

"For me personally, it's sadness for all of the ones that never made it home," Cawood said. "It's happiness for the ones that did make it home. So, you have both. It's nice to know that other areas, other people, support Memorial Day the way we do. It means more to us in the Legion than it does out in the community because, in the Legion, these veterans are first-hand. We can hear stories from them of what things were like, where somebody just off the street might not know those stories."

Cawood said the American Legion donates to veterans in the community, helping them in any way possible. One way community members can support American Legion Post 392's goal in aiding local veterans is through purchasing monthly dinners offered by the post. Dinners are $9 each and offered every fourth Thursday of the month.

"We've helped take veterans to doctors' appointments, to the VA hospital if they didn't have transportation; we've helped with gas money for veterans who are making several trips," Kirk said. "We helped a veteran do some repairs to his house; we help with the veteran's homes."

Kirk said the American Legion and American Legion Auxiliary offer mutual support among veterans in the community, creating a space for veterans to be able to discuss stories and experiences. Kirk said she wishes more people would focus on the meaning behind holidays like Memorial Day rather than writing it off as no more than a long weekend.

Kirk said the American Legion distributed poppy plants at Anderson's Berries, Bluegrass and BBQ festival in preparation for Memorial Day, as well as doing a service with the guard for Memorial Day in Neosho.

Tim McCaine, 54, is the commander at American Legion Post 392. McCaine served in the military for nearly 22 years. McCaine said Memorial Day ought to be about fallen and lost veterans, and that those same veterans should be celebrated year-round.

"We'll do veteran or memorial events," McCaine said. "We try to help with basically whatever we can do for them [local veterans]. We'll take them, if they need a ride to the VA hospital, we'll try to make sure we can get that set up for them."

Pineville's American Legion Post 392 has about 90 Legion members and 36 Auxiliary members, any veterans, family members, or spouses of veterans are able to place membership with the Legion or Auxiliary. Both the Legion and Auxiliary tackle initiatives to aid veterans, the community, and those in need.