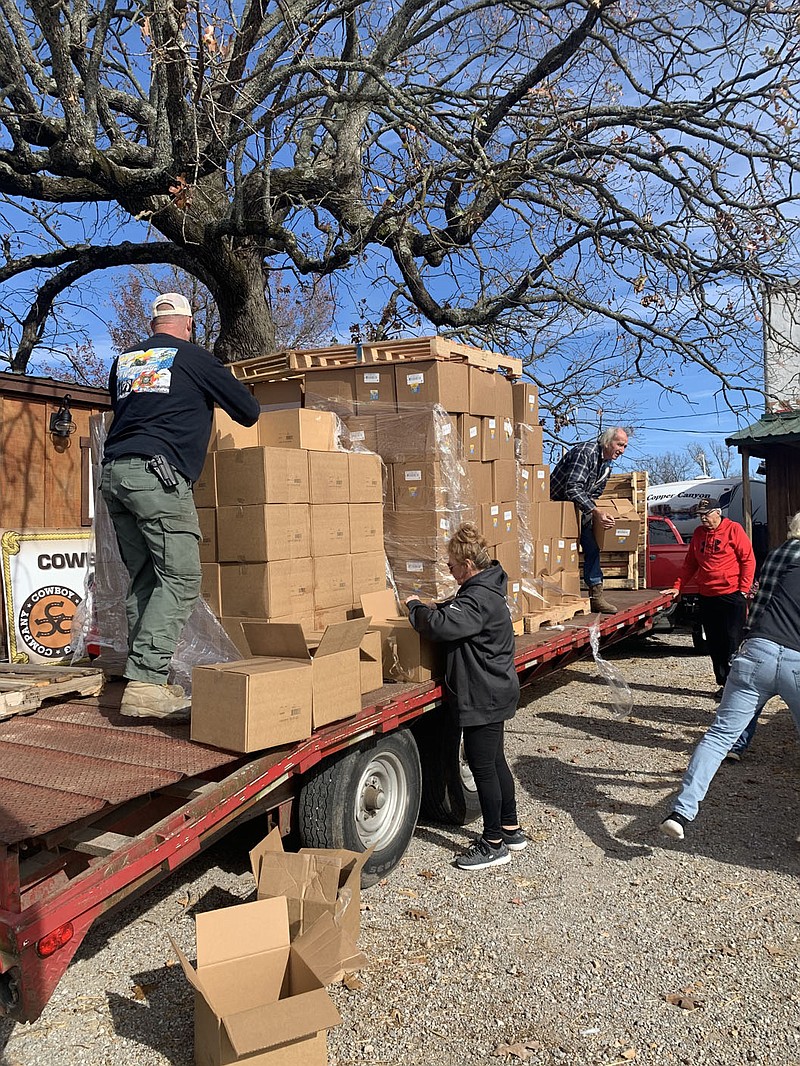 File photo courtesy of Sally Carroll/Special to the McDonald County Press The Farmers To Families program, under the United States Department of Agriculture’s umbrella, has officially ended, with the last box distributed on May 31, according to Pastor Melvin Stapp, whose church in Neosho headed up a distribution hub. Now, folks are being directed to a local recognized food bank. Stapp said clients are asked to pick up food at Crosslines of McDonald County in Anderson.

Pastor Melvin Stapp has a little worry in his voice. He wants to make sure hungry people still will be fed.

Stapp has a food pantry at his church -- Monark Southern Baptist Church in Neosho -- which has served as a food distribution hub for Farmers To Families.

That program, under the United States Department of Agriculture's umbrella, has officially ended, with the last box distributed on May 31, he said. The church received its first loads of the Farmers to Families boxes on May 19 of last year.

Several coordinators from McDonald County drove up to Neosho weekly, loading up with boxes of fresh produce and food. Volunteers from Sims Corner, Anderson and other points throughout the county would announce those weekly deliveries on social media. People lined up to get their free box of food.

Food was gathered from hotels, restaurants and other foodservice businesses that were impacted during the health pandemic, according to the USDA's website.

The USDA's Agricultural Marketing Service purchased up to $4.5 billion in fresh produce, dairy and meat products from American producers of all sizes.

With that program concluding, however, a different type of program is rolling out. The Farmers To Families program end signifies a new direction, Stapp said. Another project, under the USDA umbrella, directs people to a recognized food pantry or food bank, which will distribute food. Locally, Crosslines in Anderson is the center point, Stapp said.

"It's a different type of program," he said. "We'll have to see how it plays out."

USDA Secretary Tom Vilsack in April said that the Farmers to Family Food Box program will be discontinued due to a variety of problems, including administrative costs and food waste. His comments came during a broadcast on the USDA's website.

Instead, the USDA will continue funneling food through its traditional, regular channels, he said. Additional fresh produce boxes are included in that plan, Vilsack said.

Angie Martin, Crosslines director, said the food pantry there will continue its regular distribution of food, just like always.

The food comes from a hub at Ozark Food Harvest in Springfield, she said.

Those who wish to come in will simply fill out an application on the first visit. The program is designed for lower-income folks, but those in a pinch can be helped temporarily, she said.

Those who qualify are asked to bring a piece of mail with them on each visit to show proof of residency, she said.

Martin said she is unaware of any additional food coming her way, but that the food bank will continue to feed the hungry.

When the Farmers To Families program kicked off, the customer intake at Crosslines decreased somewhat. Now, Martin expects to see an uptick in clients.

"We are stocked and ready," she said.

Stapp's church has its own food pantry as well, and just last year, built a pavilion to keep goods out of the weather. The pavilion -- used five days a week -- comes in handy when numerous food boxes are available. Local distributors pull in, load their vehicles or trucks out of the weather, then go on their way. Fundraising continues for the pavilion.

Stapp knows well the needs of the hungry. The church's food pantry was established in 2005, and had grown to serve 400 families before the global pandemic hit, he said.

Now, Stapp is waiting to see how the new program settles, and where his church's place is in that scenario.

"Hopefully, things will improve but my hope in that is small," he said.

Stapp is worried that people in McDonald County will be worse off than they were before. Pointing people to food pantries may be the direction, but Stapp said Missouri only has six recognized food banks.

His church is not currently recognized as a food bank, he added.

Rural communities and counties -- like McDonald County -- may not fare as well. Still, he hopes to provide help for others.

"We are watching to see what we can do."