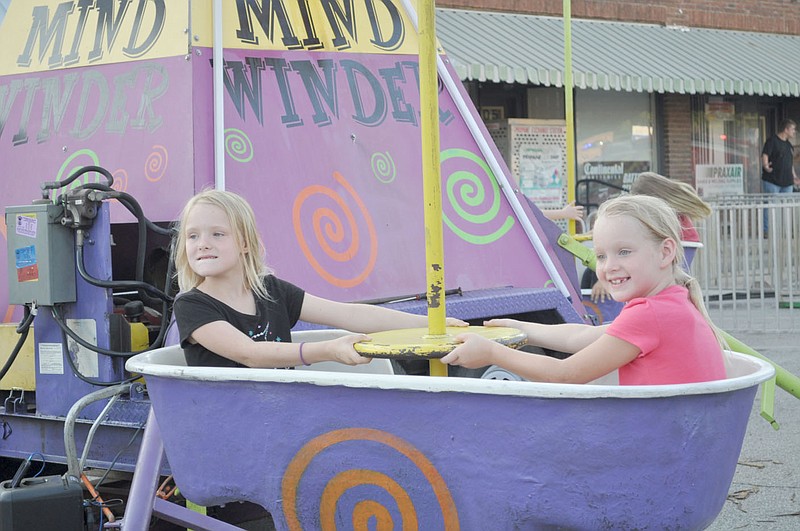 FILE PHOTO Two girls enjoy a ride at the carnival during the 2019 Jesse James Days in Pineville. Last year's event was canceled due to the covid-19 pandemic, but this year's event will be Aug. 18-21.

PINEVILLE -- Jesse James Days, the annual summer event filled with pageants, prizes and parades, will take place this summer. The event was canceled last year due to covid-19. The Pineville Fire Department, which is the annual host for Jesse James Days, plans on offering the event's usual activities and entertainment.

Ryan Drake, the fire chief at the Pineville Fire Department and event head for Jesse James Days, said plans for Jesse James Days this year include a new carnival, vendors, an open cook shack, a pageant at 6 p.m. on Thursday, numerous bands and entertainers each day, the Frisbee throw, giveaways, raffles, and a parade and chicken dinner on Saturday at 5 p.m. Drake said items being raffled this year include an AR-15, a 65-inch TV, two kayaks, and a grill. Drake added that each ticket is $1 or six tickets for $5. Pre-sale armbands and Jesse James Day T-shirts are available for purchase at Pineville City Hall.

Drake said he is looking forward to the event this summer because he felt canceling the event last year impacted the community.

"I would like to see a lot of people come out," Drake said. "I've seen a lot of activities kicking back up in the county and in the surrounding areas, and I feel like Jesse James Days is a great way to show community support."

Drake said the proceeds from vendor fees, the cook shack, the chicken dinner, raffles, and a percentage of carnival sales go back to the fire department, providing the department with the funds necessary to continue safely serving the community. Drake added that the fire department is funded primarily through donations and that Jesse James Days is instrumental for the fire department to function.

"Anything that is on the square during Jesse James Days will be benefiting the fire department in some way or another," Drake said. "Everything going on either directly or indirectly supports us financially to keep operating."

Donations and sponsorships for Jesse James Days are appreciated, and anyone interested can contact the Pineville Fire Department or Pineville City Hall.