OPINION: A Matter of Resolve 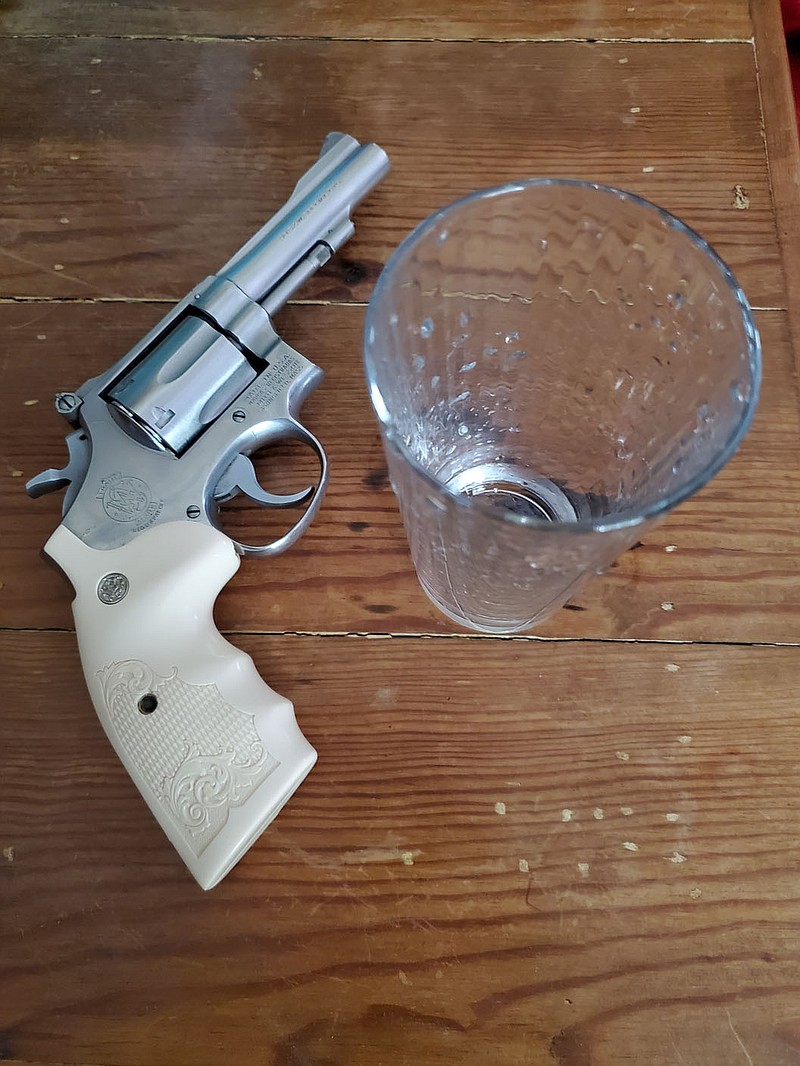 PHOTO SUBMITTED The answer to the question regarding which choice the man made can be found in this picture. You may notice that the glass is empty. He states as he deliberates that the glass is full of lemonade so the picture could not have been taken before he made his choice. The fact that it is empty while the pistol remains atop the table gives the answer regarding his decision.

In June of 1933, a 65 year-old man residing 10 miles east of Anderson, Missouri burned his house to the ground. Then using a cord tied two sticks of dynamite around his neck. The fuse was then lit and the ensuing explosion resulted in his most predictable demise. That poor and desperate soul was filled with determination however not everyone possesses such resolve. For at least one person, the decision was not so easy; the path not so clear.

The house was quiet but that wasn't uncommon as it had been that way for some years now. The early morning's air was cool and crisp outside and the impatient day waited for the Sun to fully expose itself just above the hills to the east. It was a time for thought, it was a time for reflection and it was a time for a decision to be made.

I suppose the reason for that decision began a year or so back. It began as nothing more than a fleeting thought. It was like a wisp of air that moves across your face on a windless day. Its origin was unknown but it was there. At least he thought it was there.

That faint and short lived thought came then left on warm summer days and on cold winter nights. It never lingered long but he knew that it would surely return and return it did. The meaning was always somewhat vague but after some time the thought became more of a calling, a beckoning if you will.

"Come and be with me," but come where and be with whom? It was as if the thought, the calling came from a far off place that he had never before imagined. At first he was frightened but as the calling came time and time again he became at ease. One might say he even looked forward to the thought's return. He wanted to know more about that place, that far away and unknown place.

As he sat in the darkened room he had two questions that he prayed would somehow be answered. Where had all the years so quickly gone and what was the end result? Secondly, what did the remaining years have in store? He believed that if he knew the answer to those questions he could more easily and with more conviction make his decision.

The old revolver was next to him on the side table. There, along with a glass of lemonade, were the two things he needed most at that moment. The sweet lemonade would quench his thirst and the .38 caliber revolver would without any doubt end his life.

If the decision made was to end his life he knew how to accomplish that. He knew where to place the muzzle of the gun, the angle of the barrel and he knew that he must not flinch at the moment he pulled that trigger. The procedure was quite simple and the result was predictable.

The lemonade filled the glass to its brim. Its slight yellowish tint showed through the clear glass and the cold liquid caused droplets of moisture to form on the tumbler. He remembered all the times he had been so very thirsty just before taking a first sip of lemonade.

He wondered what people would think of him should his choice be the revolver. Would some think of him less than they once had? Would there be those who accused him of causing sadness to his son? But then, and quite oddly he had a thought. There would be some who would be greatly surprised by his action as they had considered him to be quite ordinary and seemingly normal in every way; but then the term "normal" is such an arbitrary one.

There were days, and what then seemed so very long ago, when he was young and strong. He didn't need a reason to run and jump and the pain from the hardest fall soon passed. Now he was old. An ill-advised clumsy step reminded his back of its fragility. The pain in his arthritic hands often made grasping another's hand so very painful.

There was a time when he could remember the faces of so many friends and even casual acquaintances. Then, the places he had been formed vivid pictures in his mind. Now, the cruel years that have beaten him down took away the memory of friend's names and the images of fond places once visited. There was such sadness in his heart that the angels on high began to weep and their tears fell to earth like drops of rain.

As he reflected on the events of the past many years the minutes, quarter hours and half hours and yes, even the hours passed since he some time ago lowered himself onto the overstuffed cushion of that chair. That chair had been the place where he rested when his back required some time away from standing and walking. The old resting place that showed its character by the stains and torn stitching on its arms was so familiar to him. It was a place where time for thought could be had and it was a place where a most important decision could be made.

What's it to be, the glass of lemonade or the gun. He supposed that his life had come down to that one important decision but then hadn't the last few years of his life been just that way. Taste what sweetness there was to offer or leave on his own terms. He had always placed such great importance on choosing his own path and this choice was no different.

As he thought about his choice he, more than anything else, wondered about something. Did his life have any true meaning? Had his life's journey been worth the effort? If he felt that everything he had done and experienced had no value, was not worth the struggle, his decision would be easy.

He knew that he would never again have the strength or courage to not only make this most difficult of all choices but to act based on his decision. The choice was made. He settled himself into the cushion and back of the chair and reached across the table. He then, and very slowly and deliberately, raised the item of his choosing from the tabletop and brought it to him.

Stan Fine is a retired police officer and Verizon Security Department investigator who, after retiring in 2006, moved from Tampa, Fla., to Noel. Stan's connection to Noel can be traced back to his grandparents who lived most of their lives there. Stan began writing after the passing of his wife Robin in 2013. Opinions expressed are those of the author.

Print Headline: A Matter of Resolve