PHOTO SUBMITTED Hoth had a long day the day of finals, with his competition starting at about 5 a.m. and lasted until 4 p.m. Hoth works with his animals for multiple hours a week at home to practice.

Hoth said the competition is home to contestants from across the country, with the senior category of the competition broken into seven different classes of participants. Hoth noted that each class held about 10 kids, making his competition roughly 70 fierce competitors. Hoth's competition began against the 70, then narrowed down to about 30 kids in semifinals. In the final round, Hoth had to fit and show his animal while being watched by the judges. After the fitting, which the competitors only had 30 minutes to accomplish, and contestants have shown their animals, competitors had to let others show their animal and vice versa. Hoth said he was the only contestant from Missouri to place in the finals of the senior category, a large jump for Hoth as he did not make it this far in the competition last year.

Hoth said placing in the finals was a great accomplishment for him, and that he was happy with his placement.

"It was a proud accomplishment," Hoth said. "Whenever I was selected back to come for the top 10, I was really happy. I was kind of proud, I guess, that I was able to get back there. Even just to represent my state, too."

Hoth said he has been showing animals since he was a young boy, with his father and grandfather as models for him. Hoth said he encourages kids to get any livestock and show it, a practice he's taken advantage of for much of his own life.

"It's a pretty difficult competition," Lewis said. "You've got to make it out of your heat. Say there's 10 kids in there and they're going to pick two or three of the top ones. Out of those few that they pick, you've got to go back in again and they pick 10 more out, that's just based on how you're showing your animal. And then after that you have to go back in and actually fit your animal."

Lewis said Hoth fitted his animal well, and it was obvious that his animal was ready and well-prepared for the competition.

Jason Hoth, 50, Carson Hoth's father, attended the competition with his son and Lewis. Jason Hoth said he is proud of his son's accomplishment as the competition is known to be very difficult.

"It's a huge accomplishment, his mom and I are really proud of him," Jason Hoth said. "There were a lot of other kids here that would have really wanted to be in there, and he made it, so it's a big accomplishment to do that on a national level."

Jason Hoth said he viewed this competition as his son slowing down in his showing, something he's done for so long, before moving away and attending college. Carson Hoth will attend Lincoln Land Community College in Springfield, Ill., this upcoming fall where he will study livestock.

"He's getting old enough where he's only going to do this for a few more years," Jason Hoth said. "His years of showing are winding down, so getting to experience this with him is a once in a lifetime opportunity. You don't get a lot of these." 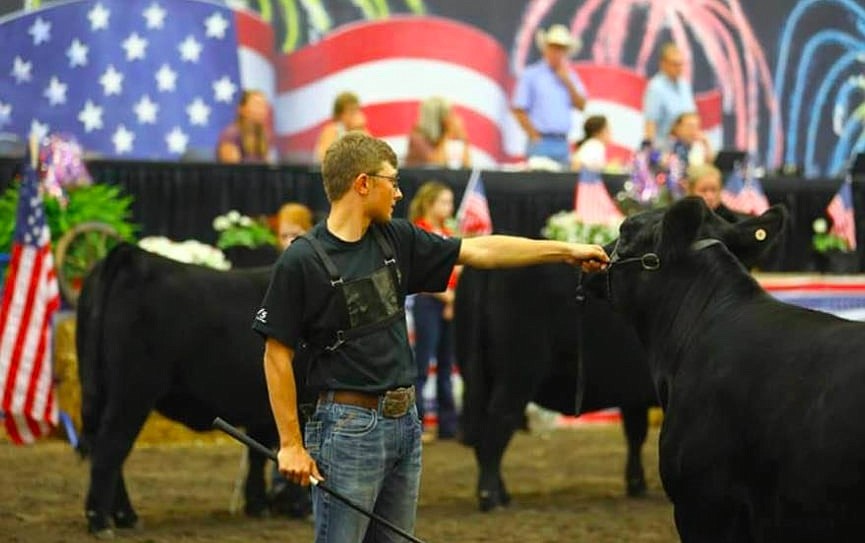 PHOTO SUBMITTED Hoth has attended this competition before, where he did not make it out of his class. Hoth had to show his animal after he fitted it for the final round.