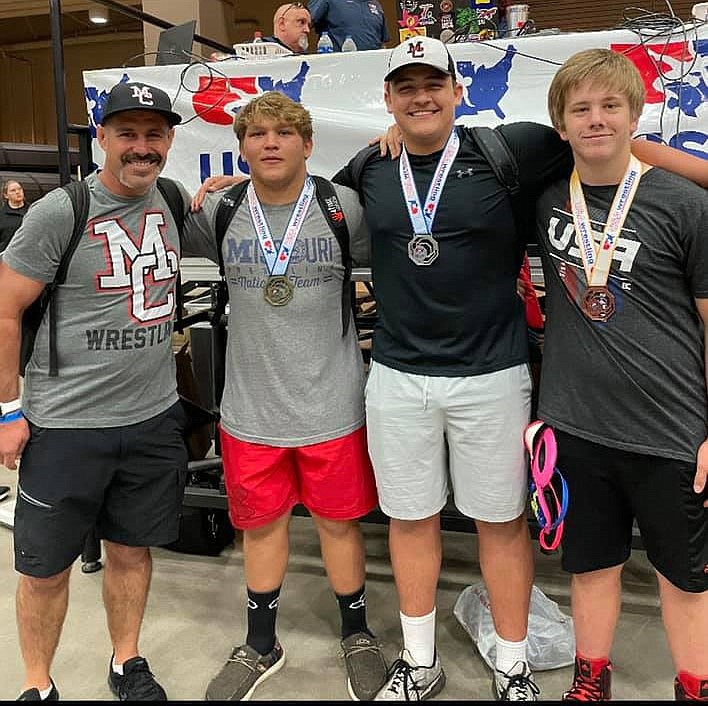 Three wrestlers will represent McDonald County High School at the freestyle and Greco-Roman national championships to be held July 16-23 in Fargo, N.D.

The three qualified for the national tournament by earning at least a fourth-place finish at the Southern Plains Freestyle and Greco-Roman Championships on June 5-6 in Mulvane, Kan.

Leading the way was Samuel Murphy. Murphy, a sophomore at MCHS, took first in the 16U Greco-Roman 220-pound division with a 4-0 record, winning one match by an 8-1 decision, two matches by technical falls (match called when one wrestler is ahead by 12 points) and one match by pin.

Murphy also took first in freestyle, winning three of his four matches by tech fall and one match by pin.

The final qualifier was Alex Bogart. Bogart, an incoming freshman at MCHS, took fourth in the 16U Greco-Roman division at 182 pounds with a 2-2 record.

In freestyle, Bogart won one match and lost two and did not qualify for the freestyle national tournament.

Murphy and Hitt were both members of Team Missouri at the Greco-Roman and Freestyle National Dual Tournament held June 10-12 in Westfield, Ind.

Hitt won all eight of his matches in freestyle, while Murphy was 7-1, to help Missouri to split its eight dual matches.