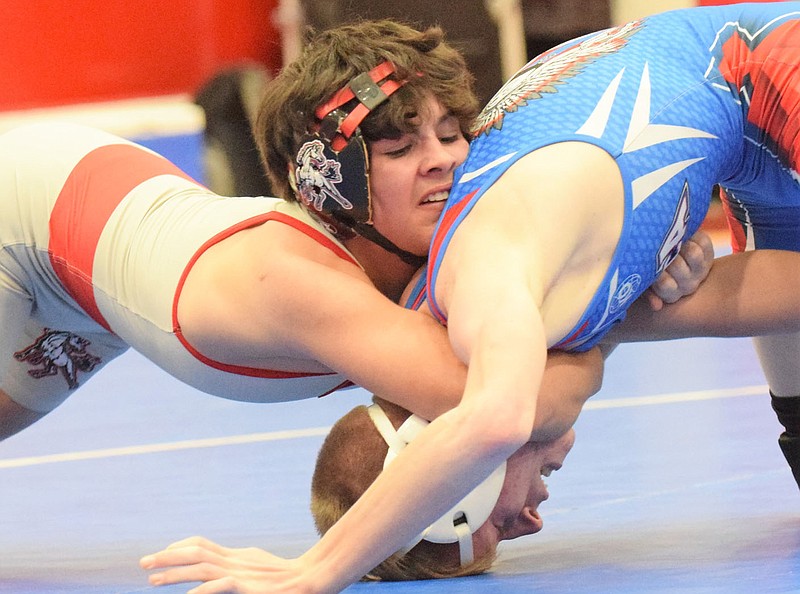 Blaine Ortiz made the most of his opportunity at the Big 8 Conference Wrestling Championships held on Jan. 22 at Seneca High School.

In a rare bit of circumstances, Ortiz's 113-pound weight class had just one other wrestler besides the McDonald County sophomore.

It took Ortiz just 33 seconds into the second period for him to pin senior Dalton Duley of Seneca to claim his conference championship.

"Blaine Ortiz captured his third individual tournament championship this season by becoming the Big 8 Conference champion at 113 pounds," said coach Josh Factor. "That's a great accomplishment for him and our program."

Ayden Ball took third at 120-pounds for the Mustangs, defeating Grant Jones of Hollister by pin late in the second period.

With only four wrestlers in the weight class, Ball lost his only pool match and then was pinned in the semifinals before responding with a pin in the third-place match.

"Perhaps, one of our biggest highlights of the tournament was freshman Ayden Ball, who finished third at 120 pounds," Factor said. "Ayden is a great kid who continues to get better each day in our room and it's great to see his commitment to wrestling begin to pay off in his success."

Without a doubt, the toughest draw for a McDonald County wrestler was at 220 pounds, where freshman Sam Murphy took third place.

Murphy dropped a 3-2 decision in a tiebreaker to Zach Coenen in a pool match. Murphy had beaten Coenen in overtime in a dual at MCHS on Jan. 19, but the Cassville senior was able to return the favor this time.

The loss forced Murphy to face Daylon Kanengieter of Marshfield in the semifinals, where Murphy lost a 5-4 decision.

But Murphy rebounded to beat Jacob Tate of Seneca by a 14-4 decision to claim third place.

"Although this was not the finish Samuel was hoping for, it says a lot about a freshman who competes this close to two returning state medalists," Factor said. "We never like to see our guys lose matches, but if it's what lights a fire under them to change the result between now and the state tournament, we'll take those losses."

"I felt like this tournament was just what our wrestlers needed at this point in our season," Factor said. "For some, it was a direct reflection of the work they have put in all season. The others learned if they want to be successful, they have to put in more commitment to the sport. By commitment, I mean showing up to practice every day and placing priorities on working towards their goals in wrestling. Even though we had just three guys earning all-conference recognition, this tournament was a great learning tool for our team as we are just weeks away from postseason competition. We just need to get our team healthy and polish up on a few areas to peak when it counts the most."

McDonald County is at the Liberty Tournament on Jan. 30-31. The boys' district tournament is set for Feb. 12-13 at Carl Junction High School.

The girls' district tournament is set for Feb. 5-6 at McDonald County High School. 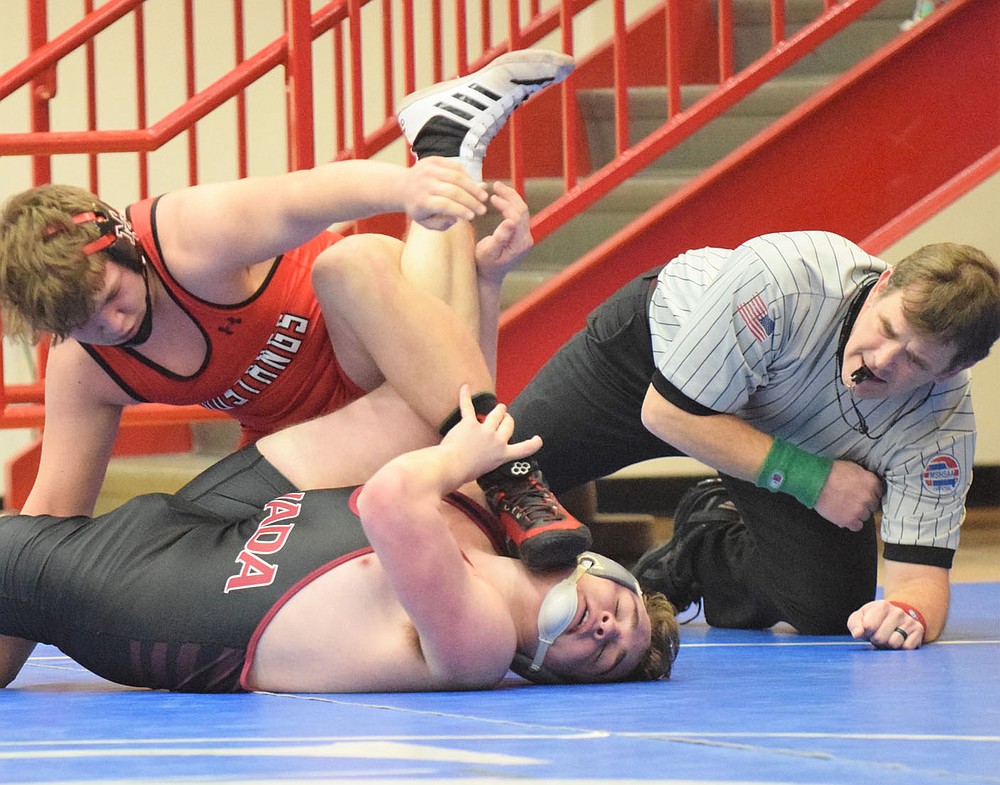 RICK PECK/SPECIAL TO MCDONALD COUNTY PRESS McDonald County's Samuel Murphy gets a foothold in his match against Logan Smith of Nevada at the Big 8 Conference Wrestling Tournament held on Jan. 22 at Seneca High School. Murphy pinned Smith and went on to take third place in the tournament.
ADVERTISEMENT