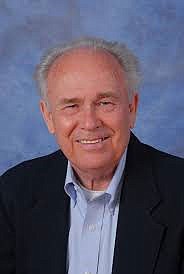 The Powell community will miss its own world-famous songwriter and music publisher who wholeheartedly devoted himself to the small yet beautiful spot.

Robert Bartlett "Bob" Brumley died peacefully in his sleep on Christmas Eve, at his home in Powell.

To lose such a pillar of the community is "very heartbreaking," said Linda Lindquist Baldwin, friend and Powell neighbor.

"I've known him all my life," Baldwin said. "I knew his father Albert and his mother Goldie, who was the friendliest person. I feel lucky about that," she said.

Despite his fame, Brumley was very unassuming, wore blue jeans and was extremely approachable.

"I loved Bob. He impressed me, not by his accolades, but by the way he helped people. He was unpretentious. He didn't flaunt his fame. He was just a nice, nice man," she said.

Brumley was born Dec. 7, 1937, in Harrison, to Albert E. and Goldie Brumley. He and his family returned to Powell less than a year later, and Brumley made Powell his life-long home.

He began his career in the 1940s, working with his father and his brothers to print and publish more than 40 million songbooks, including books for The Grand Ole' Opry, Renfro Valley, Ozark Jubilee, and more.

Their company is now one of the largest privately held music publishing companies in the world.

Community service was important to him, and Brumley chose to serve on the McDonald County School Board, the Crowder College Foundation and the Powell Historical Preservation Society. Baldwin served on the Crowder and Powell boards with him. His down-to-earth personality and his love for the community served him well, she said. Brumley also served as a postal clerk, then as postmaster for a total of 30 years.

Brumley volunteered as a teacher and song leader at the Powell Church of Christ. Baldwin said the church will surely feel the loss of his presence.

From get-togethers to hosting the Powell Farmers Markets on his grounds, Brumley gave back to his community in many ways. "He was so generous," she said. "He never charged us anything for the grounds (for the Farmers Markets)," she said.

Brumley was known for hosting a variety of local events, including the annual firework displays, pie suppers, coon hunts, bean feeds, and the annual Hill & Hollow Folk Festival from 1969 to 1994.

Brumley joined forces with his dad and his brother Bill, to found the Albert E. Brumley Sundown to Sunup Gospel Singing in Springdale, Ark. The event then moved to Fayetteville, Ark., then Lebanon, Mo., with its final destination in Tulsa, Okla. The annual event was held from 1969 to 2017 and, at one time, garnered the honor of being the largest outdoor gospel singing in the world.

Brumley and the love of his life, "Tudy," celebrated their 50th wedding anniversary in 2010. She died on April 15 of last year, and Brumley was worried about spending his favorite holiday -- Christmas -- without her, Baldwin said. He died peacefully in his sleep on Christmas Eve.

The kind gentleman who could have lived anywhere in the world found much solace and comfort in the beauty of Powell, Baldwin said.

"He truly loved Powell and would do anything for Powell."

He is also survived by his brothers Al Jr. and wife Robin, and Jackson and wife Elke.