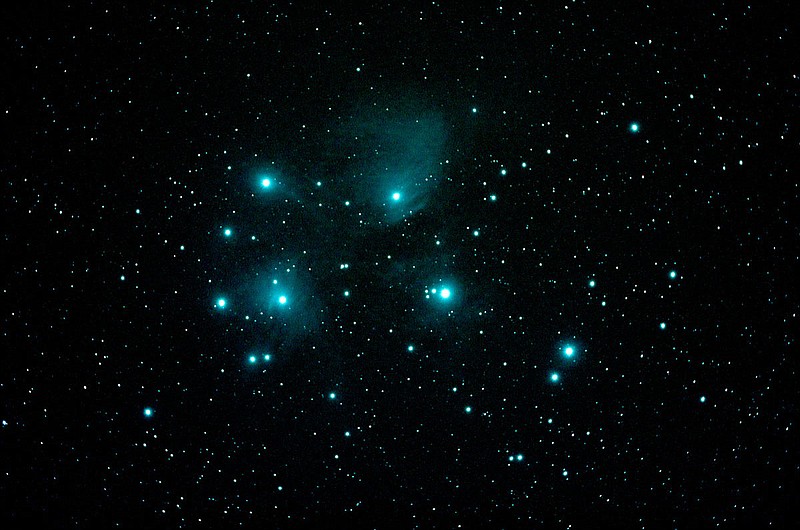 David Cater/Star-Gazing The Pleiades are featured in the January night sky.

Happy New Year to everyone! Looking back to the old year, it was a year of interesting night sky things. My friend Clinton and I photographed a 'mystery object,' we had a nice comet, Neowise, and just this last month we had a conjunction of Jupiter and Saturn. What will the new year bring? Many things in the heavens repeat themselves over the eons, but there may also be surprises none of us anticipated...

I thought this month I would write about something anyone can see in the night sky -- the Pleiades. Sometimes this little group of bright stars is called the Seven Sisters. This little group is even mentioned in the Old Testament.

If you go outside after the sky is sufficiently dark this month, bring your binoculars and find the Pleiades. It will be a bit higher than halfway up the sky, looking directly east. Some people might confuse this group with the Big Dipper or the Little Dipper but this group is neither one of these. It may, at first, look like a little hazy cloud, but even with just the naked eye, it will resolve into a close group of individual stars. With binoculars, it is really spectacular.

Most people report that these stars have a bluish cast. This is actually true because each of the stars you can see with the naked eye does have a bluish cast. The color of a star depends on its temperature. Stars the color of the Pleiades group are very hot and also relatively young. They will burn through their hydrogen fuel in only several million years as compared to our Sun which will burn another 4-5 billion years. But...there is another reason why the Pleiades appear bluish.

I have included an image that I made of this group last month. If you look at it closely, you will see that some of the stars appear to be surrounded by bluish clouds. These are, of course, not water clouds, but clouds of dust. Interstellar dust absorbs the red end of the visual spectrum but allows the blue end of the spectrum to shine through. Imagine a street light on a lamppost, surrounded by fog. The light would appear to be in a cloud of diffuse light. This same effect occurs in the Pleiades with dust, too, but on a gigantic scale.

The stars of the Pleiades have their own motion. Currently, they are moving through this cloud of dust. Someday, these stars will have moved out of the dust and will be seen as the same little group but without the blue haze.

The Pleiades always appears near the end of the year in the Northern Hemisphere but you can see them into the new year. When I see the Pleiades, I think of getting a brand new year--some of the same things will be seen in this new year, but, likely, there will be at least one or two new surprises--what will these new surprises be?

Stay safe and enjoy beauty where you see it...