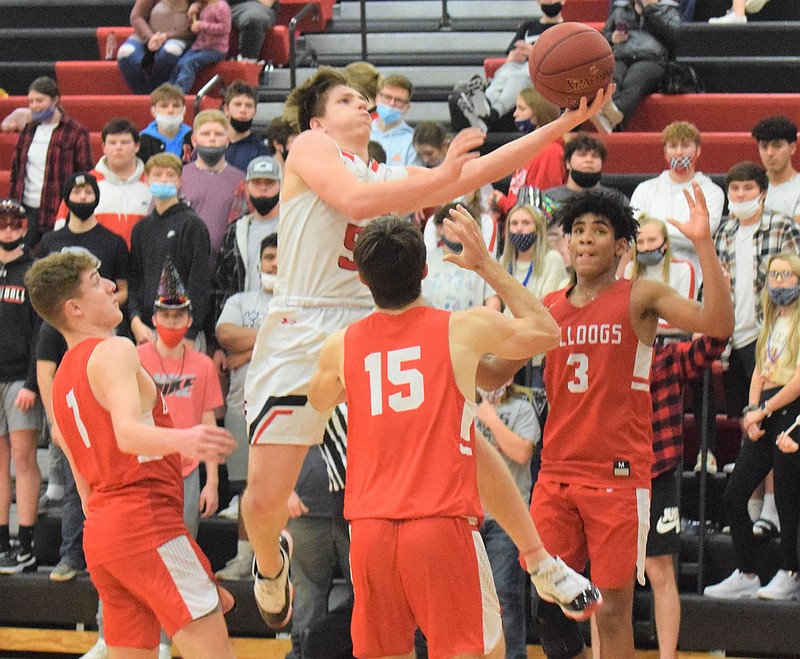 RICK PECK/SPECIAL TO MCDONALD COUNTY PRESS McDonald County's Cross Dowd splits a trio of Carl Junction defenders for a layup during the Mustangs 89-70 win on Jan. 4 at MCHS.

McDonald County led 16-12 at the end of the first quarter and 38-32 at halftime, thanks to Cross Dowd, who scored the Mustangs' final 12 points of the half.

But McDonald County broke open a close game in the third quarter, scoring 33 points to stretch the margin to 71-55 after three quarters. The duo of 6-10 Teddy Reedybacon and 6-5 Eli McClain scored 10 and 9 points, respectively, in the period to key the Mustangs.

Carl Junction trailed by as much as 22 and got no closer than 13 points in the final quarter.

Pierce Harmon took over the scoring load in the period, scoring seven of his 18 points in the final eight minutes.

"All year we have had two quarters at some point in the game where we would struggle," said coach Brandon Joines. "Tonight, we said it was a new year and we were a new team that would play all four quarters and we finally did. We worked hard on the defensive end and when our big guys and guards both score 40 points, we are going to be hard to beat."

Reedybacon joined Harmon with 18 points, while Dowd finished with 15 points, McClain had 13 and Garrett Gricks 12. Rounding out the scoring for McDonald County were Cole Martin and Sterling Woods with six points each and Dalton McClain with one.

McDonald County improves to 2-8 entering its Jan. 8 game against Monett at MCHS.

The McDonald County junior varsity added a 56-21 win behind 18 points from Weston Gordon.

Carl Junction avoided a sweep with a 47-44 win in the freshman game.

East Newton proved its number 10 ranking in Class 4 team in the state is well deserved as the Patriots handed McDonald County a 64-42 loss in the second round of the Neosho Holiday Classic held on Dec. 29 at Neosho High School.

East Newton's Connor Killion, an early signee with the Naval Academy, scored 16 of the Patriots 20 first-quarter points to give East Newton a 20-14 lead after the first quarter.

East Newton continued to stretch the margin the rest of the way, taking a 34-23 lead at halftime and a 51-29 margin entering the fourth quarter.

"Our goal was to come out and compete, no matter what class they are because they can compete with anybody," Joines said. "I thought we came out and played an outstanding first quarter. We have been having a rough second quarter most of the season, but I thought we still competed tonight. It was an 11-point game at halftime and I felt really good where we were going with our game. We were feeding our post and letting our advantage take care of itself. In the second half, we had a self-inflicted turnover and, once that happened, we went on an eight and a half minute scoreless streak. It's hard to beat a team when you can't score for over a quarter's worth of time. Effort wise, I have no problem with how hard we played. If we played like that, we would have had a different game with Hillcrest (71-46 loss on Dec. 28 in the tourney opener)."

Killion finished with 22 points to lead all scorers.

McDonald County closed out the Neosho Holiday Classic with a 56-49 loss to Lamar.

The Mustangs trailed 42-31 after three quarters and by 46-34 early in the fourth period when McDonald County went on an 11-2 run to cut the margin to 48-45 midway through the period.

Cross Dowd started the comeback with back-to-back three points while Harmon added a trey of his own and Reedybacon had a short jumper.

But Lamar answered by scoring eight consecutive points to build a 56-45 lead with less than two minutes left. Reedybacon hit a basket from the block and Harmon added a pair of free throws to cut the margin to 56-49, but the Mustangs could get no closer.

McDonald County trailed only 21-17 midway through the second period, but Lamar closed the first half with a 10-3 run to take a 31-20 lead at halftime.

"It's the same old thing," Joines said. "But it's a different half every time. The first half we didn't move the ball and we were taking the first open shot off the first pass and we weren't in rhythm and didn't have our rebounders in position. In the second half, we were much more patient. We went from 10 turnovers in the first half to one in the second. Hopefully, we can take how we played in the second half into the new year. We have a seven-game streak against teams that we want."

Reedybacon scored 14 points and Harmon 11 to lead the Mustangs. Rounding out the scoring for McDonald County were Cross Dowd with nine points, Eli McClain and Gricks four each, Israel Marcos three and Woods and Clarkson two each.

Mason Gastel scored 14 points and Joel Beshore and Gunnar Dillon had 13 each to lead the Tigers. 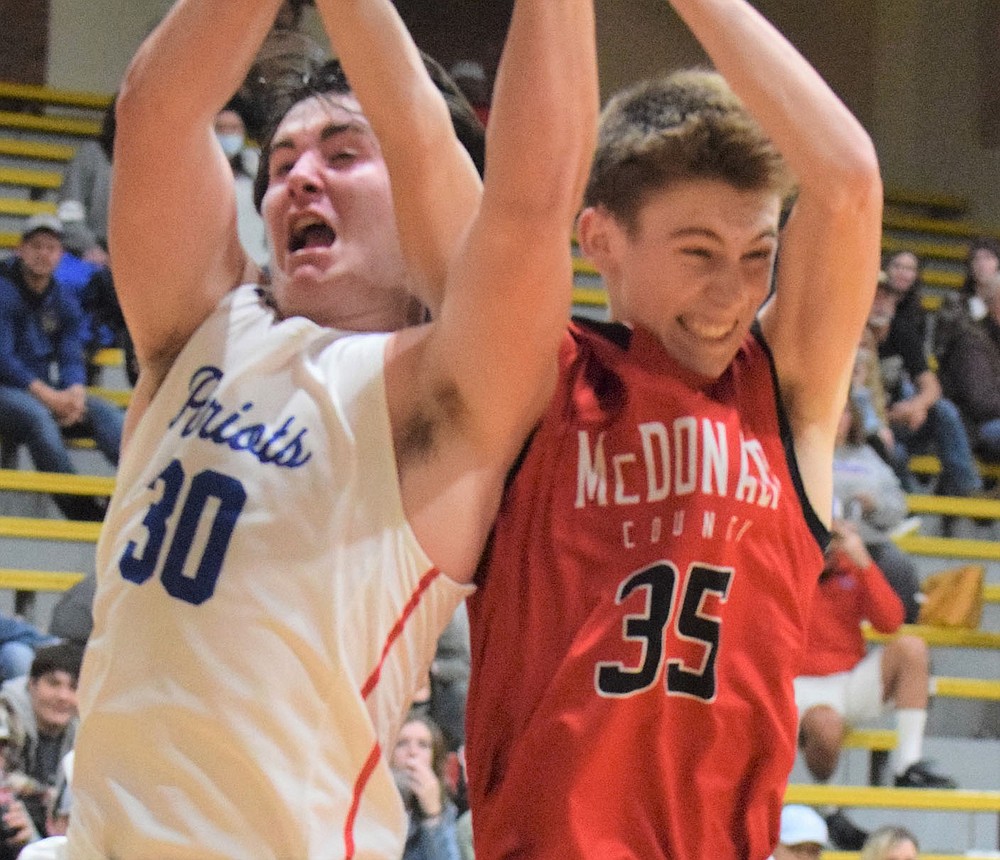