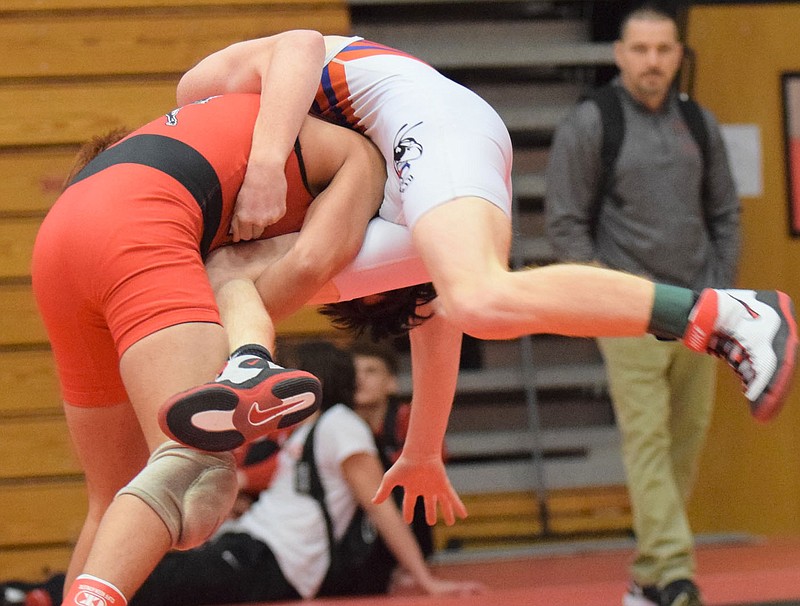 The present doesn't look bad either.

McDonald County had four wrestlers make the championship match at the Missouri Class 3, District 6, Wrestling Championships held on Feb. 13 at Carl Junction High School on the way to having seven earn a trip to the sectionals with a top-four finish.

Two of the four Mustangs in the finals were freshmen, while the remaining two were sophomores. Of the seven qualifiers, six are freshmen or sophomores.

Ortiz won both of his matches by pin, including a second-period pin of Max Matthews of Carl Junction in the championship match.

Hitt won all three of his matches by pin. In the finals, he pinned Kameron Bennett of Carl Junction midway through the second period.

"Blaine and Jayce were both solid and came away with wins by fall in their finals matches," said coach Josh Factor. "Blaine, after falling short of reaching the state tournament a year ago, has been a man on a mission. Jayce is defying all obstacles in his path. First was at the district seeding meeting where the majority of coaches in our district did not feel he was worthy of being the top seed. Jayce not only proved that he was the top wrestler in the district, but he pinned his way through the entire tournament as a freshman."

Smith and Murphy both lost in the finals to wrestlers from Neosho High School. Smith and Neosho's Hayden Crane tied 6-6 at the end of regulation, but Crane ended up winning by pin in overtime.

Murphy dropped a 2-1 decision to the Wildcats' Jacob Fry on a third-period penalty point.

"Smith and Murphy both suffered losses to opponents from Neosho," Factor said. "It's always tough to lose matches to those guys, but the season isn't over. I'd like to think it helped fuel a fire going into sectionals with these two having something to prove."

"Overall, I was very pleased with the performance of our team," Factor said. "We brought nine wrestlers to districts and seven of them qualified to sectionals. I would say the future looks bright for our wrestling program when six of our seven sectional qualifiers are freshmen or sophomores.

"As a coaching staff, we are extremely grateful for the opportunity our wrestlers have been given to compete in the postseason this year and now we will do our best to get our wrestlers prepared to compete at sectionals."

Sectionals are set for Feb. 27 at Willard High School.

Neosho won the team title with 231 points, followed by Carl Junction with 155, Willard 131, McDonald County 89, Webb City 50, and Hillcrest and Parkview both with 45. 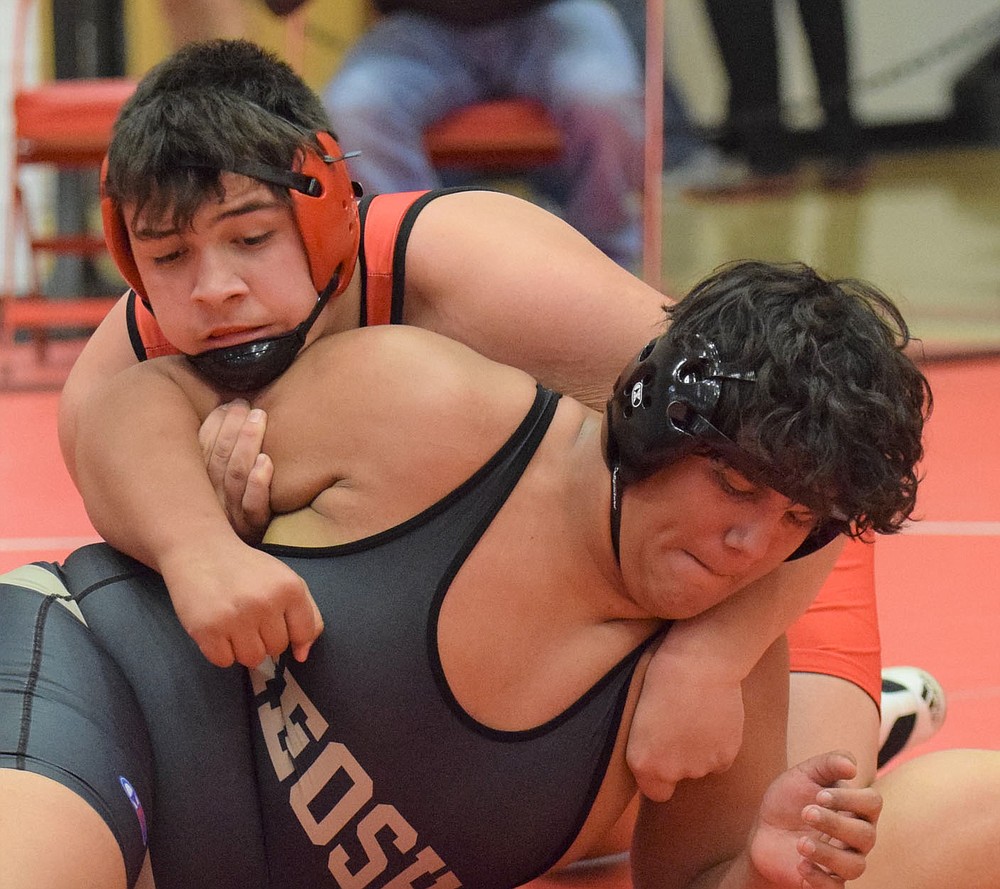 RICK PECK/SPECIAL TO MCDONALD COUNTY PRESS McDonald County's Jayce Hitt tries to get Neosho's Nicolas Olivares to his back in a 285-pound match in the district semifinals. Hitt eventually pinned Olivares on the way to a district title. 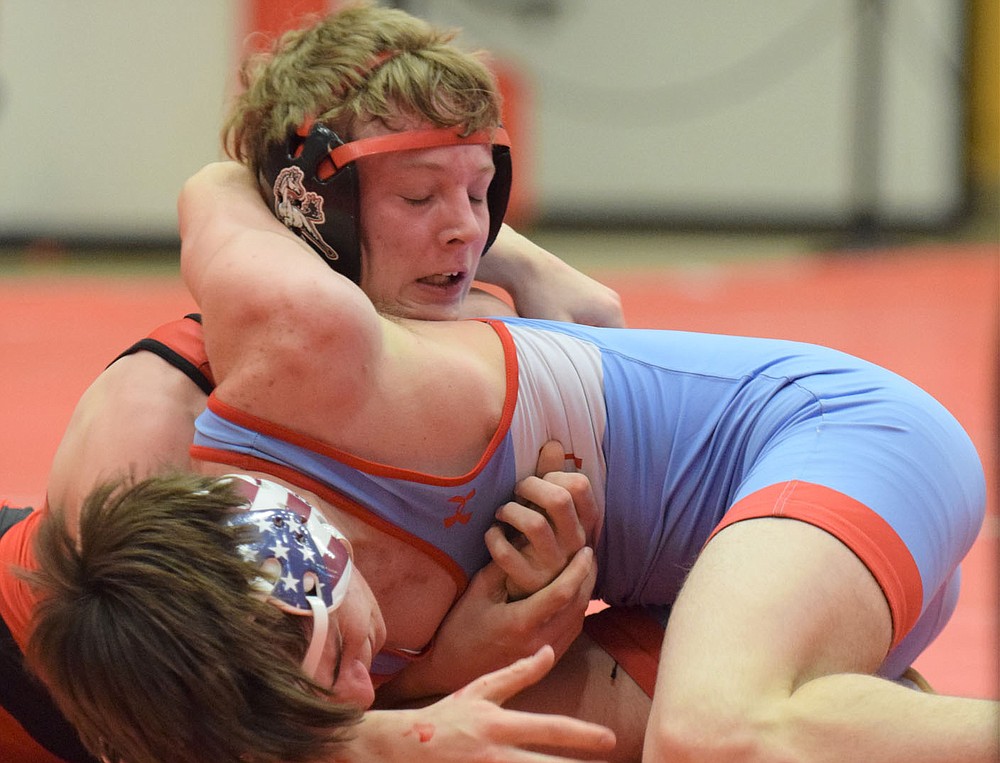 RICK PECK/SPECIAL TO MCDONALD COUNTY PRESS McDonald County's Levi Smith pinned Dominic Boles of Webb City in the semifinals of the district tournament only to lose later in the championship match. 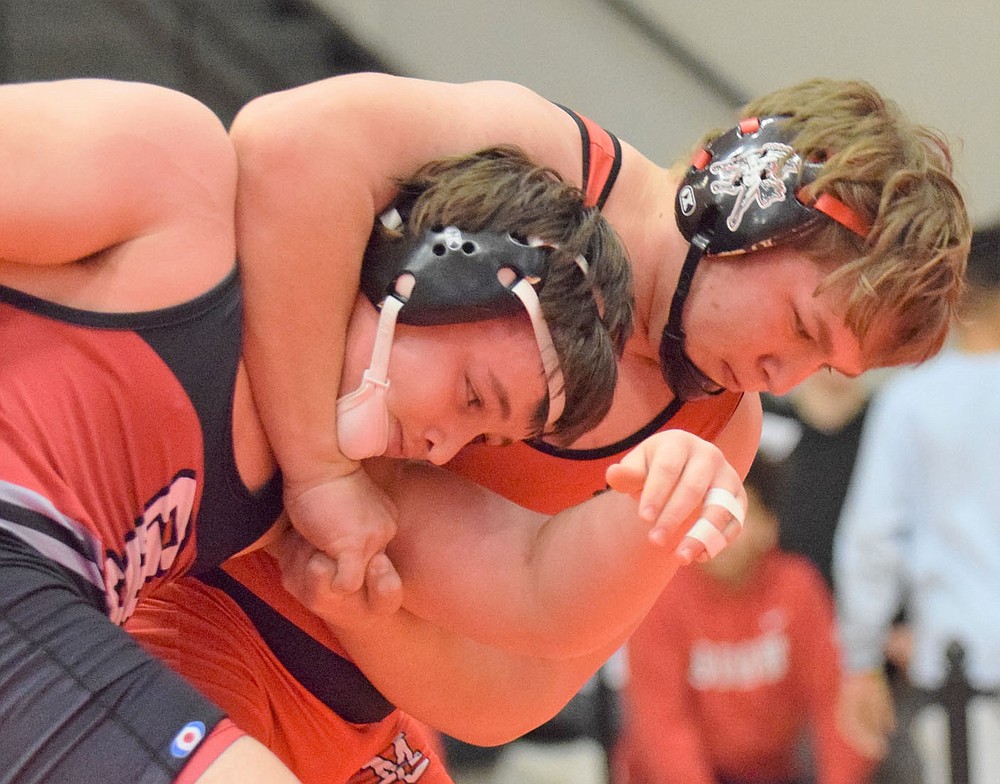 RICK PECK/SPECIAL TO MCDONALD COUNTY PRESS McDonald County's Sam Murphy looks for a throw in his 220-pound match against Brennan Carey of Carl Junction at the district tournament. Murphy claimed a 5-1 decision, but lost a 2-1 decision later in the finals.
ADVERTISEMENT