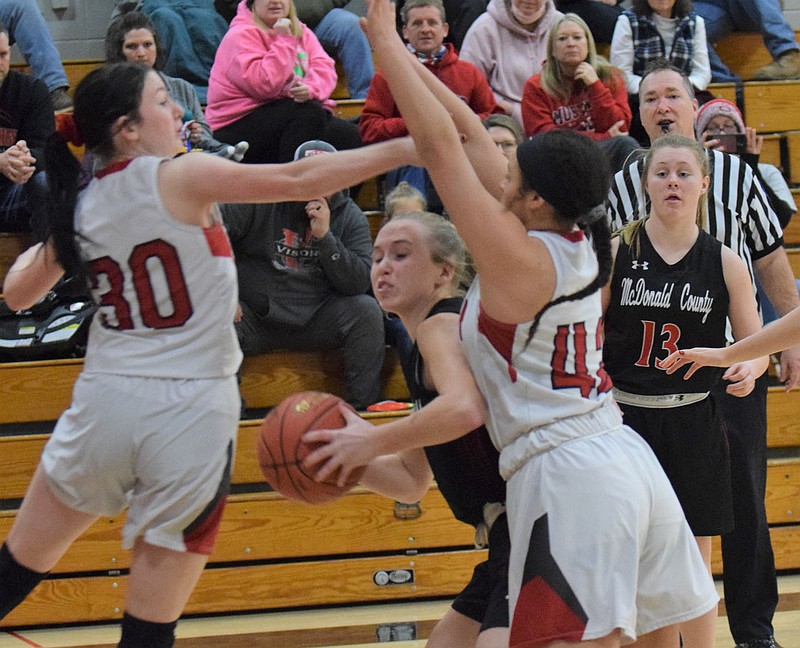 "Defense wins championships" is supposed to be applied to football teams.

But the Lamar Lady Tigers took that approach in their showdown with the McDonald County Lady Mustangs to take control of the race for the championship of the West Division of the Big 8 Conference.

Despite the low offensive production, McDonald County led from the opening basket until 2:02 left in the game when Lamar tied the score at 25-25 on a pair of free throws by Sierra White.

Lamar's Eli Daniels broke the ice with a short jumper before Josey Adams then hit a pair of free throws to give the Lady Tigers a 29-25 lead with 39.9 seconds remaining.

Samara Smith cut the lead to two with a jumper from the lane with 22.2 seconds left before Adams missed a pair of free throws to give McDonald County a chance for the tie or win.

After a time-out, McDonald County had the ball at the Lamar baseline. Carlie Cooper brought the ball up the court and found Sydney Killion open on the baseline. Killion's jump shot from about 15-feet bounced off the front of the rim before time expired on the scramble for the rebound.

"When you hold a team to 29 points you should be able to win," said coach Sean Crane. "We just can't score. We only scored 10 points in the second half. You can't completely rely on your defense. If you are relying on your defense to hold somebody to 25 points, you are going to have problems and we are having to do that too much. It's not a lack of effort -- the girls are working their tails off. We just can't get it together offensively right now. We put ourselves in a good situation but, when you let a team hang around, it's going to get you."

McDonald County jumped out to a 10-5 lead at the end of the first quarter behind seven points from Killion. The Lady Mustangs stretched the margin to 17-9 at halftime. Lamar cut the margin to 22-17 after three quarters before outscoring the Lady Mustangs 12-5 in the fourth quarter to pull out the win.

Killion finished with 15 points and Smith seven to lead McDonald County. Rounding out the scoring for the Lady Mustangs were Cooper and Adasyn Leach with two each and Abigail Wiseman with one.

McDonald County's game at Nevada set for Feb. 12 was postponed due to weather. The date for a makeup game and plans for the Big 8 crossover game set for Feb. 15 have not been announced as yet.

Lamar claimed a 42--24 win in the junior varsity game.

The Lady Tigers jumped out to a 12-3 lead at the end of the first quarter and led 16-8 at halftime. Lamar stretched the margin to 26-13 after three quarters.

McDonald County was led by Kloe Myers with six points, followed by Wiseman with five, Natalie Gillming, Katelyn Townsend and Ebenee Munoz with three each and Anna Clarkson and Nevaeh Dodson two each. 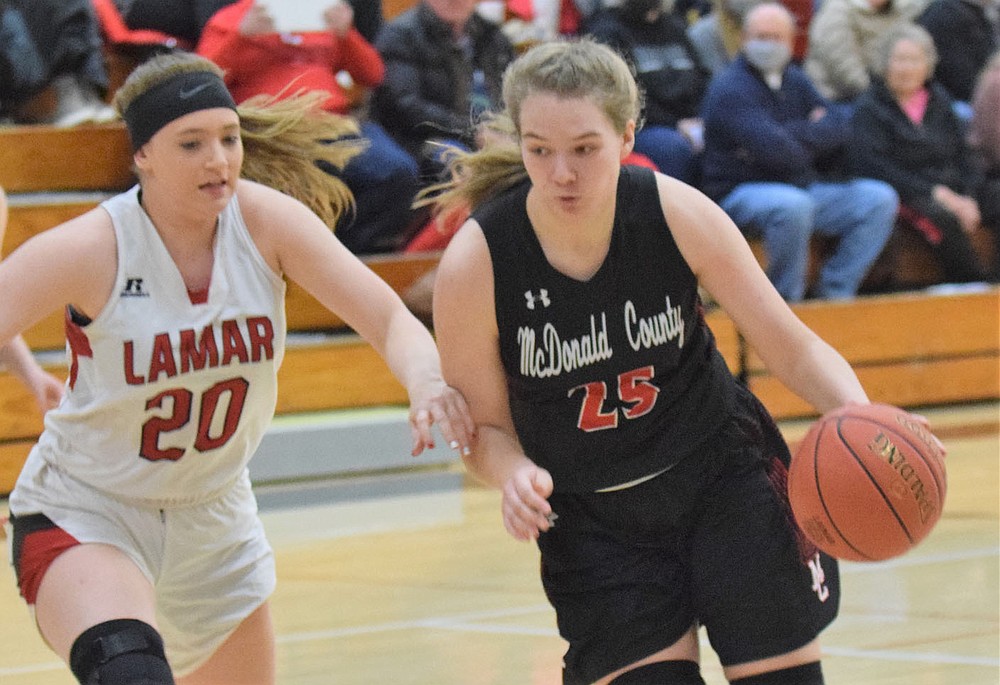