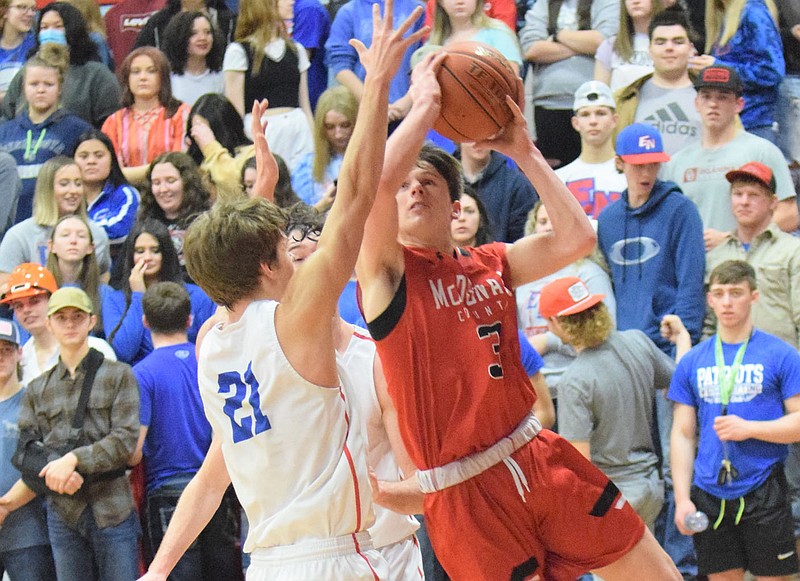 Connor Killion scored 12 points in the first half and Kyson Lahman took over in the second half with 17 to lead the East Newton Patriots to a 75-58 win over McDonald County on Feb. 5 at East Newton High School.

McDonald County scored the first two points of the game on a pair of free throws by Cole Martin before Kelton Sorrel hit a three-pointer for East Newton.

Cross Dowd put the Mustangs back on top at 4-3, but Killion's two free throws gave East Newton the lead at 5-4 and the Patriots would not trail the rest of the game.

East Newton led 14-10 after the first quarter and stretched the margin to 36-19 at halftime,

East Newton outscored the Mustangs 18-13 in the third quarter to take a 54-32 advantage into the fourth quarter.

"The first half we beat ourselves," said coach Brandon Joines. "We had too many turnovers, especially in the second quarter when we just threw it right to them and let them go down and score. Things got sloppy on our part. We didn't rebound and we didn't do the little things that we have talked about, which makes it that more frustrating. You talk about these things every day and nothing got fixed. In the second half, things got crazy out there and kids kept fighting. Even when we gave up layups, it was because we were hustling to the ball. If you want to claw back in the game, you have to take some chances."

Part of the craziness came in the first minute of the fourth quarter. Dowd and East Newton's Lucas Kimbrough got tangled up and went down in front of the East Newton student section. Several students went on to the floor and surrounded Dowd. McDonald County principal Angie Brewer stormed across the court to be the first administrator to reach the melee and separate the players from the students.

East Newton was assessed a technical, which helped the Mustangs outscore the Patriot, 26-21, in the final period.

Dowd finished with 18 points to lead McDonald County, while Pierce Harmon added 10. Rounding out the scoring for the Mustangs were Garrett Gricks with eight points, Cole Martin and Eli McClain seven each, Weston Gordon four, and Jackson Clarkson and Irael Marcos two each.

Layman finished with 25 points and Killion 17 to lead the Patriots.

McDonald County claimed a 55-22 win in the junior varsity game.

McDonald County falls to 7-11 overall, 3-2 in the West Division of the Big 8 Conference, heading into its Feb. 12 game at Nevada.

With just under four minutes left in the game, McDonald County sophomore guard Cross Dowd hit the second of his consecutive three-pointers to give the Mustangs a 59-58 lead over the Strafford Indians.

But over the final four minutes of the game, the Indians outscored McDonald County, 18-4, including 16 free throws to claim a 76-63 win.

"They are an absolute solid shooting team," Joines said. "We gave them a lot of wide-open looks. Our defense wasn't as active as we have been in the past few games. I don't know if that was fear of their shooting ability or something else. They get a lot of credit because they are very deep with a lot of good shooters. Kudos for them hitting the shots when they needed to. I thought, offensively, we did pretty well. We hit some big shots and were able to get a lead in the fourth quarter, but it just fell away right after that. It was like we thought we had it and then we let it slip away. Our rebounding wasn't very good. We have to box out better and take care of the ball."

McDonald County entered the fourth quarter trailing by three, but Strafford stretched the margin to five at 58-53 before Dowd put the Mustangs on top by one.

Both teams got off to a fast start with McDonald County taking a 24-22 lead at the end of the first quarter behind nine points from Dowd and eight from Eli McClain. Strafford led 36-35 at halftime and 49-46 after three quarters.

Dowd finished with 23 points. McClain added 15 and Harmon had 14. Rounding out the scoring for the Mustangs were Martin with seven points, Teddy Reedybacon and Gricks two each.

Strafford was led by sophomore A.K. Rael with 24 points, including 11 free throws, nine in the fourth quarter. Seth Soden added 16 points while Vance Mullins had 13.

Destyn Dowd scored 17 points and Behm had 11 to lead McDonald County. Rounding out the scoring for the Mustangs were Dalton McClain and Moore with five points each and Swanson, J. Harrell, Eli Jordan, Gordon and Ruddick with two each. 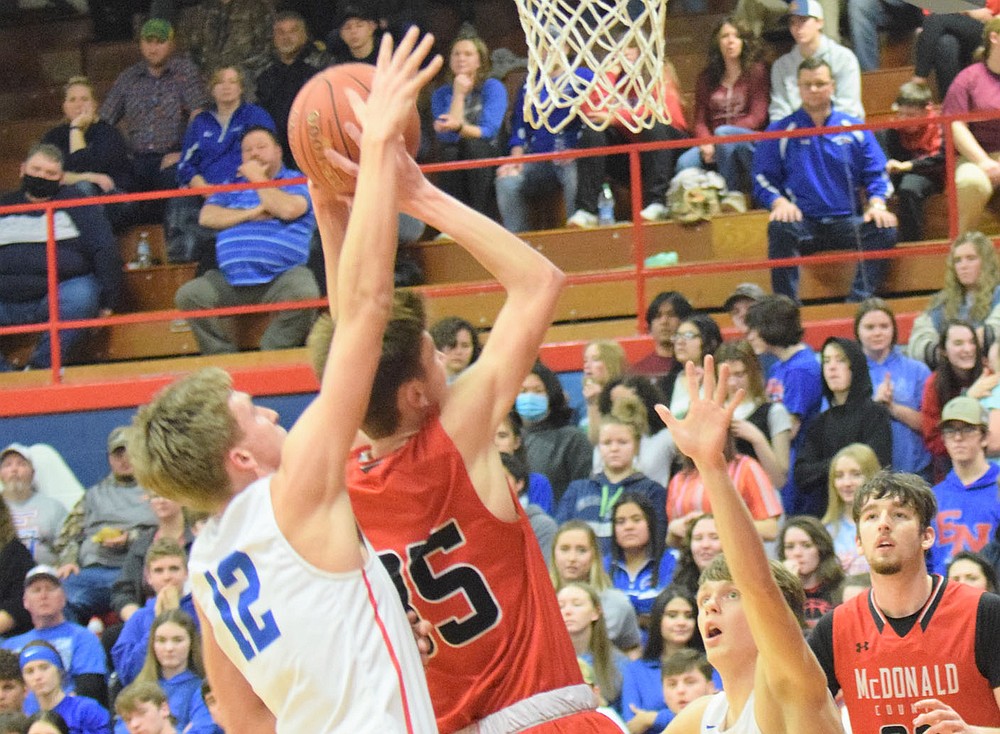