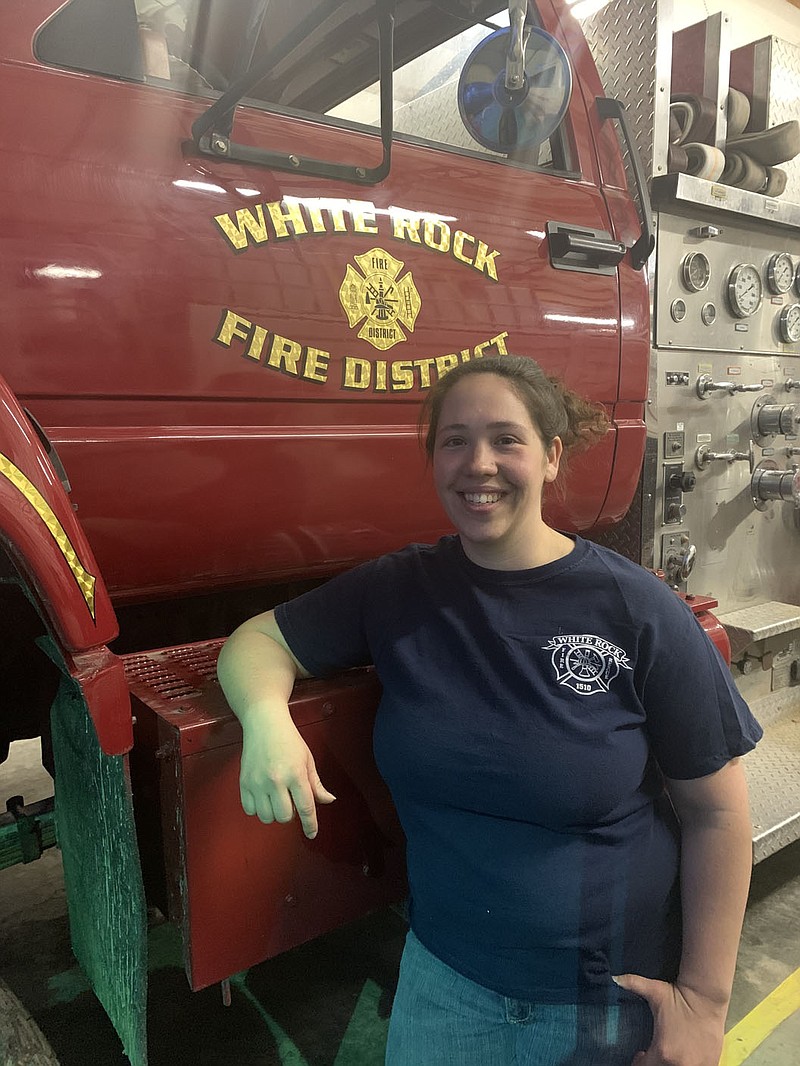 SALLY CARROLL/SPECIAL TO MCDONALD COUNTY PRESS White Rock Fire Department volunteer Krystle Poirier successfully balances motherhood, career, marriage and volunteerism. She works full-time as an emergency medical technician, assists the White Rock Fire Department and stays fit by working toward a second-degree black belt in Taekwondo. “I want to be a good role model for my kids,” she said. “I try to make every day better than the day before."

Poirier, who celebrates her relatively new marriage to Fred Parker, is mom to Autumn, seven, and Luke, five.

She works full-time as an emergency medical technician, volunteers with the White Rock Fire Department and stays fit by working toward a second-degree black belt in Taekwondo.

"It wraps it all together," she said. "It's great for goal setting." She tries to take on Taekwondo every day possible. If she's on shift, she can take advantage of a Taekwondo class by Zoom. The regimen motivates her to improve. "I try to make every day better than the day before," she said.

Poirier has volunteered with the White Rock Fire Department for about two years. She's actually a Rhode Island transplant, who came to the area in 2014 for family reasons. Volunteering for a fire department is a passion of hers. She's volunteered since 2008 -- in some form or fashion -- before even moving here. Her interest in assisting others began early in life. The name tag she created in kindergarten had firefighter symbols stamped all over it, she said.

She carried that interest of helping others into serving in the U.S. Navy for one year, based out of Connecticut on a submarine base. She worked as a master of arms, providing security. That position taught her that evil definitely is a force to be reckoned with. Providing security for the military is more expansive than the average person believes, she added.

Here in the Ozarks, Poirier made the transition from the East Coast, to the beauty of the area and the friendliness of folks. She met Parker and they found they had a lot in common. They went on some calls together, began dating and then sealed the deal. The two were just married last year.

She's now working on her paramedic license and hopes to eventually hire on with a professional department.

She loves volunteering, making the time to help out McDonald County neighbors.

"I love being able to help the community in the way I'm trained to do," she said. "It's satisfying, knowing that, at the end of the day, I did the best I could do," she said.

Her marriage and her children bring her joy. Her career and volunteerism keep her fulfilled. Taekwondo keeps her grounded. It's a good combination that works well. Poirier said the physical exertion enables her to focus on all of her juggling.

Editor's Note: This feature is part of a series of White Rock volunteer firefighter profiles. The volunteer fire department in Jane responds to emergencies and non-emergency calls within a 90-square mile area.