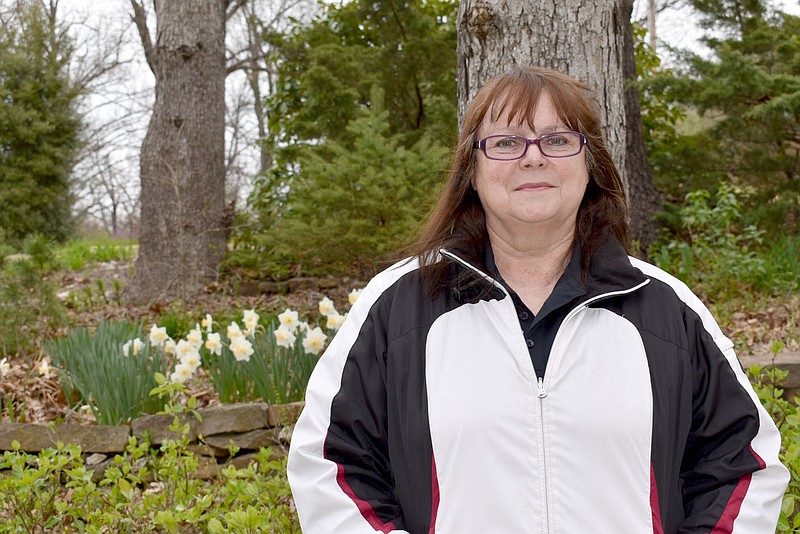 RACHEL DICKERSON/MCDONALD COUNTY PRESS Jutta McCormick of Anderson is a member of the Hill n' Hollow Master Gardeners. She has been interested in gardening since growing up in Germany.

Jutta McCormick of Anderson has been a member of the Hill n' Hollow Master Gardeners for 10 years, building upon a love of gardening that began during her childhood in Germany.

"I grew up on a farm, so that's how I started in gardening," she said.

She grew up with vineyards, fields of potatoes, and fields of wheat, sugar beets, corn, along with pigs, cows, chickens and rabbits. She said her mother had a garden and even tried to grow a watermelon once, but it was too cold.

When she and her husband settled at their present home in Anderson in 1995, it was all woods, and they had to clear a lot of underbrush. The ground was rocky, and they had to bring in loads and loads of topsoil so that they could plant vegetables and flowers. McCormick said the climate here was different from Germany, and she learned a lot by trial and error about what would grow here and what would not, which plants were native and which were invasive. The home is on 30 acres of woods, and so a lot of wildlife roam the area and are attracted to her produce and flower bulbs, she said.

In early April, she had a number of different types of flowers blooming around her home, including tulips and daffodils, rose verbena, grape hyacinths, celandine poppies, tall phlox, ground phlox, purple coneflowers, lily of the valley and hostas.

She has learned a lot in master gardeners, she said. They always have demonstrations, and they have a demonstration garden in Neosho. The produce from the garden is given to the Help Center in Neosho. The Hill n' Hollow Master Gardeners comprises both McDonald and Newton Counties. She said the demonstration garden has produced lots of fresh cucumbers, tomatoes, radishes, corn, peppers, strawberries, etc. Last year they added blueberries and blackberries, and this year they added raspberries.

The organization holds a plant sale the first weekend in May every year, with proceeds going to community projects. She said they have had to let a lot of projects go because membership is declining due to members growing older and no younger members joining.

She shared some tips on what gardening steps should be taken in the month of April.

She said April is the time to apply weed preventer, do trimming, fertilizing and pruning. She said normally she does not plant anything until April 15 in order to see if there will be one more frost. April is the time to get the garden ready, she said. She makes her own compost, which a lot of people do, she said, but those who do not have that luxury can purchase bags of mushroom compost at Lowes.

Regarding becoming a master gardener, she said there is a training that is offered online that covers soil management, trees, perennials, propagation and other programs. Plenty of continuing education is also offered, and there is a Facebook page called "Ask a Master Gardener."

"It's a really good program, especially if you want to get into gardening," she said. "We go to farms and see how to make cheese or go to lavender farms to see how they grow lavender and make oil."

She said they have had speakers come and talk about subjects such as bees and horticulture and butterflies.

"It's a really rewarding program," she said.

The first year in the program, the master gardener has to do 30 hours of volunteer work during the year to become a full master gardener. After that they have to do 20 hours per year, she said.