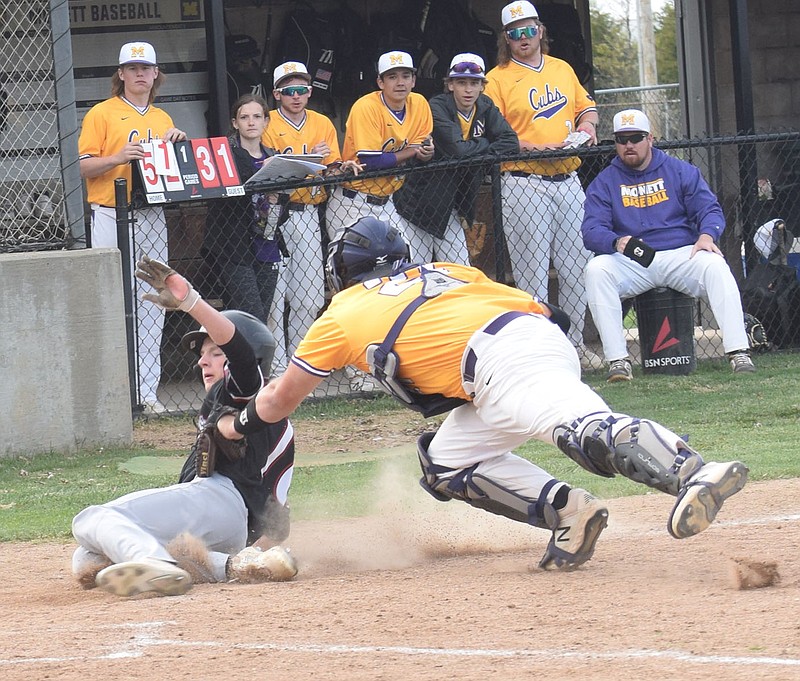 RICK PECK/SPECIAL TO MCDONALD COUNTY PRESS McDonald County's Jack Parnell gets tagged out by Monett catcher Tanner Wright despite trying to dive around the tag during the Mustangs 9-5 win on April 15 at Monett High School.

After losses to Shiloh Christian and Lamar earlier in the week, the McDonald County High School baseball team was in dire need of a win when the Mustangs traveled to conference rival Monett on April 15.

That looked doubtful when the Cubs jumped out to a 5-0 lead after one inning, but starting pitcher Weston Gordon and two relievers shut out Monett the rest of the way and McDonald County scored three runs in the fifth and six more in the seventh as the Mustangs rallied for a 9-5 win.

"It was a good win," said coach Kevin Burgi. "We had talked after the Lamar game (7-5 loss on April 13) about overcoming adversity and being able to punch back when you have been punched and, obviously in the first inning, Monett did a really, really good job of punching us. We did a good job overcoming it. I thought throughout the game we were just kind of waiting, I wasn't worried like I have been at times because we were a little more locked in at the plate."

After giving up five runs on six hits in the first inning, Gordon settled down and shut out the Cubs on just two hits over the next three and a third innings.

Ethan Francisco retired the only two batters he faced before Rylee Boyd got the win with two innings of scoreless relief, allowing one hit while walking one and striking out five.

"Weston Gordon did a great job after that first inning," Burgi said. "Ethan Francisco has done a really nice job all year of getting us out of some tough spots and he did it again. Rylee Boyd did a good job slamming the door."

Monett's Daniel Geiss had shut out McDonald County on four hits through four innings before the Mustangs scored three runs in the fifth to cut the Cub lead to 5-3.

Cole Martin reached on an error to start the rally. With one out, Levi Helm walked to put runners on first and second. Cross Dowd drove in the first run of the inning with a double before Levi Malone drove in the final two runs with a two-out single.

McDonald County still trailed by two and was down to its final two outs before erupting for six runs in the top of the seventh.

Gordon reached on a base on balls by relief pitcher Tanner Wright with one out to start the winning rally. Malone followed with his second hit of the game before pinch hitter Fisher Sanny hit a hard ground ball up the middle that Monett's second baseman Blaine Salsman was able to knock down. But Salsman's attempt to throw out Sanny from his knees was wild, allowing Gordon to score to cut the lead to 5-4.

Isaac Behm then hit a ball that Monett played eerily the same as Sanny's, except it was shortstop Jason Garner who knocked down the hard-hit ground ball and threw it away. Behm was credited with a single and a game-tying RBI while the go-ahead run scored on the error.

With two out, Martin was intentionally walked, but Destyn Dowd made the strategy backfire with a bloop single to right field to drive in a run. But a wild throw to third in an attempt to throw out Martin was wild, allowing both Martin and Dowd to score.

"We were aggressive running the bases and took advantage of their mistakes," Burgi said. "At the end of the day, that is a big reason we were able to come back. Seven of our nine starters had a hit and Fisher Sanny came off the bench and got a really, really big hit. We kept our strikeouts down and chased their pitcher at 95 pitches in the fifth. We only struck out six times and so it comes down to why we won that game is because of that. We battled with two strikes and were able to put a ball in play. The Sanny at-bat was really big. He came out in a pretty big spot and got his first hit as a member of the varsity. We played seven guys (starter, pinch hitters, pinch runners) in the seven spot in the lineup and without all seven of those guys, we don't win. It was a fun game. We played 17 guys and got contributions from every one of them."

Malone and Behm finished with two hits each, while Martin, Destyn Dowd, Helm, Cross Dowd, Sanny and Parnell had one each to lead McDonald County.

In a makeup of a game at Mount Vernon scheduled for April 16, McDonald County instead hosted Clever at Joe Becker Stadium in Joplin on April 17.

The Blue Jays scored two runs in the first inning, one in both the third and fourth innings and pitchers Zack Garcia and Jake Twigg made them stand up in Clever's 4-3 win.

Destyn Dowd started for the Mustangs, allowing three runs on four hits while striking out three and walking five in two and two-thirds innings. Ruddick allowed a run in an inning and a third before Ethan Francisco went three scoreless innings.

Martin led off the inning with a single and scored on a sacrifice fly by Helm.

Again Clever answered in its next at-bat to make the score 4-2 before McDonald County scored the game's final run in the bottom of the fourth.

Gordon singled and came around to score on two walks and a wild pitch.

Garcia went five innings, allowing just three hits for the win. Twigg worked the final two innings for the save, striking out five.

Gordon had two of the Mustangs' three hits while Martin had the other.

McDonald County falls to 9-9 entering its April 20 game against East Newton. The Mustangs travel to Cassville on April 22.

McDonald County scored three runs in the top of the first off Lamar ace Case Tucker, but Tucker shut out the Mustangs the rest of the way to key Lamar's 7-3 on April 13 in Lamar.

Martin doubled and scored on a single by Helm for the Mustangs' first run. Cross Dowd followed with an RBI single before Malone drove in the final run of the inning with a ground out.

Lamar chipped away at the lead with single runs in the first and second before scoring three runs in the third to take a 5-3 lead. The Tigers added two insurance runs in the fourth.

Colton Ruddick and Boyd each worked an inning of scoreless relief for the Mustangs.

Tucker got the win, going the distance, while allowing just four hits, including just one after the first inning, striking out eight and walking one.

Malone's single in the seventh was the only other Mustang hit other than the first inning hits by Martin, Helm and Cross Dowd. 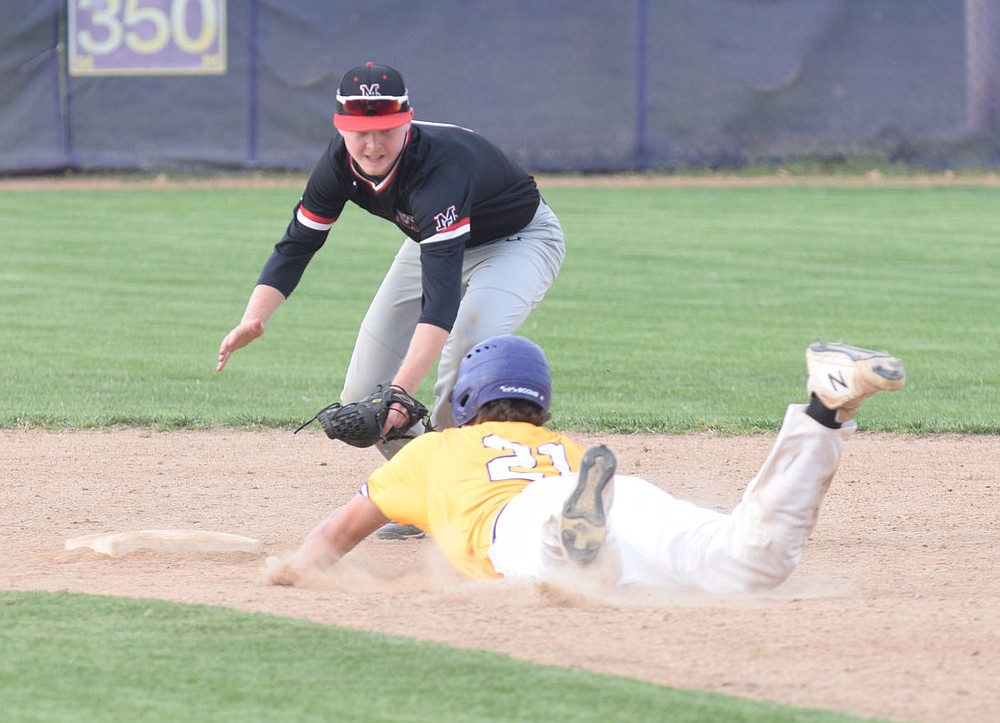