Pixler Is 'Tired, Overwhelmed' That Grace Doe Is The Half-Sister She Sought 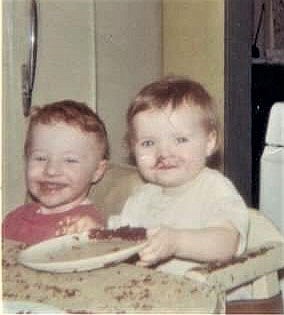 Photo Submitted Danielle Pixler, Shawna's half-sister, shares this photo of 14-month-old Shawna. Pixler, who lives in the Topeka, Kan. area, recently completed a DNA test to see if her DNA was a close match with DNA from an unidentified body. Investigators have determined that the remains are of Shawna Garber, cracking a 30-year-old cold case in McDonald County. Shawna is Pixler's half-sister.

Nine months ago, Danielle Pixler began having nightmares of someone screaming in a dark place. She never imagined those bad dreams might be a link to her long-lost half-sister.

Pixler's dreams were vivid. "I heard someone screaming, 'Help me, help me.'"

About a month ago, part of that puzzle piece began to shuffle into place when McDonald County Sheriff's Office patrol supervisor Mike Hall called Pixler, who lives in Topeka, Kan. Hall, who has previously served as sheriff, shared information about a 30-year-old cold case involving "Grace Doe."

A DNA extraction taken from Grace Doe's skeletal remains provided a new start. Othram, an independent lab in Texas, utilized DNA processes and genealogy to try to figure out Grace Doe's identity. Othram then provided Hall with a list of 12 possible relatives of Doe. The first two names didn't have phone numbers, so he called the third, he said.

That was Pixler. He explained that investigators were working on identifying a person in a cold case. The person had had extensive dental work done. Pixler felt in her heart that it was her half-sister, Shawna Garber.

Pixler has been trying to find her half-sister for 28 years. Their mother was not a nice person, Pixler explained. Garber was burned and later, required extensive dental work.

"She was burned and had to redo all her teeth," she said.

Hall asked if Pixler would be willing to take a DNA test. She took the test, sent it to Hall, who then sent it on to Othram. When the results came back, Hall informed her of the match.

Investigators believe Grace Doe is Shawna Garber, her half-sister. The match was made in Garber's birthday month when she would have celebrated her 53rd birthday.

She was only 22 years old when she died. Many questions remain.

Pixler believes the nightmares started it all.

"I still feel there's a connection. I never gave up."

Grace Doe was discovered on Dec. 2, 1990, near an abandoned farmhouse on Oscar Talley Road, between Lanagan and Pineville, according to reports. A couple collecting cans discovered her remains. Her killer utilized six different types of cord and clothesline for bondage, investigators have said. The six different types of cord included military cord that was not available to the public in 1990, reports said.

Investigators believe Doe was raped before being strangled.

Doe was dubbed "Grace," thanks to a former investigator, who said the case would be solved "by the grace of God."

A crowdfunding campaign successfully raised $5,000 for the project and Othram began its work on the 30-year-old unsolved case, McDonald County Sheriff Robert Evenson has said.

Hall credits Othram and DNASolves.com for helping with the identification of Grace Doe. Though it's exciting to have Shawna Garber identified, investigators still have more work ahead.

"It's almost daunting," Hall said. "The next step is recreating her life, who knew her as an adult" before she met her fatal incident.

Hall is looking in the Topeka, Kan., area, Iola and other small towns in Allen County for additional information. Right now, he's waiting on other agencies to catch up and offer some information they might have.

Garber was about five years older than Pixler. Garber was around 6 to 8 years of age, and Pixler was only about 2 or 3 when they were taken away, she said.

Unfortunately, Pixler doesn't have many memories because she was so young. Her family sometimes tries to fill in the memories, which Pixler said is difficult.

By the time Pixler was 8, she went to live with her father, who raised her.

Over the years, she learned of her half-brothers but could not find Garber. By the time she was 18 or 19, she began actively looking for her.

She spoke with Garber's foster mom in 2008 but ran into a dead end.

Now, Pixler realizes that she's found her half-sister but they won't reunite as she imagined. Dealing with that, and Garber's murder, is stressful.

"I'm tired and overwhelmed," she said. "I never thought in my wildest dreams. It's rough. It's hard. I haven't been able to sleep."

Her own children have been amazing through this journey. Pixler, who won't detail much about her mother, said she made a conscious effort to break the cycle and establish loving relationships with each one of her children.

"I said I will never be like my mother," she said.

Gripping her new reality, Pixler said she's determined to keep going, shed some more light on the case and find out why Garber was murdered.

"She didn't deserve any of this," she said. "She was a beautiful human being, inside and out. She was a very kind, loving, caring person."

Anyone who has information that could help the investigation move forward is encouraged to contact the McDonald County Sheriff's Office at 417-223-4319.