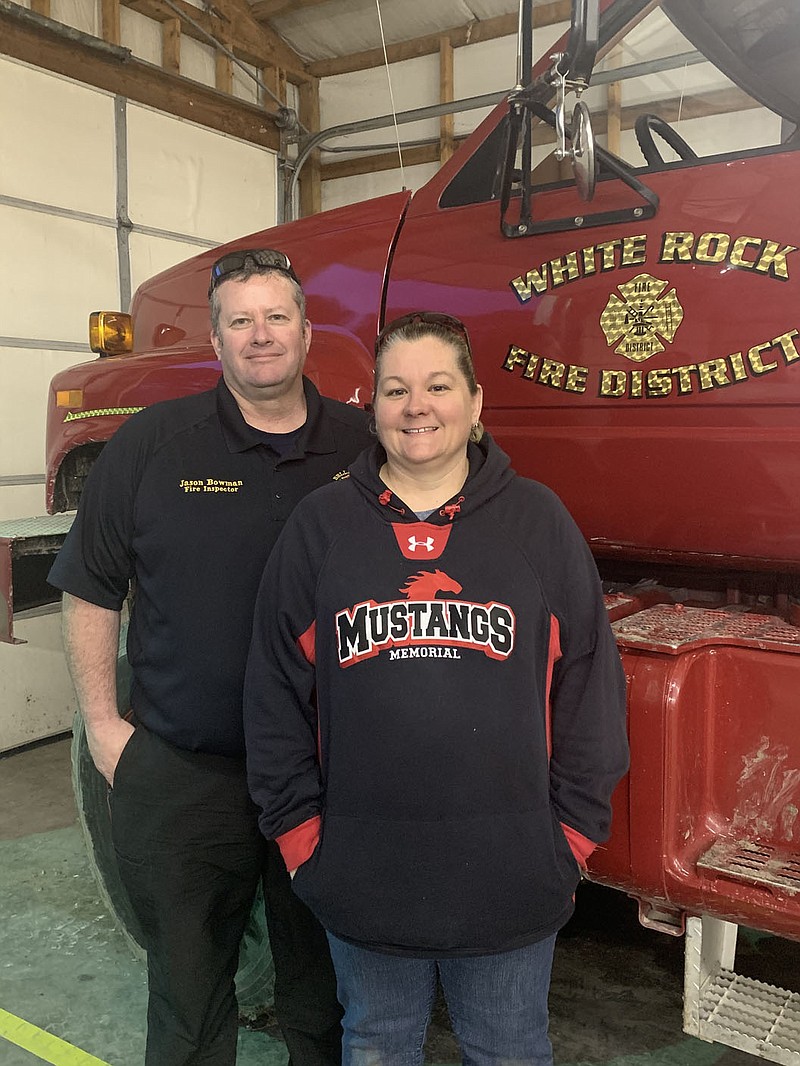 SALLY CARROLL/SPECIAL TO MCDONALD COUNTY PRESS White Rock Fire Department volunteer Amber Bowman goes on fire calls, as well as helping out behind the scenes. She and her husband, White Rock Fire Chief Jason Bowman, serve the community through their efforts with the department.

On a Monday night, when others might be relaxing and watching TV, Amber Bowman is moving around throw rugs, boxes and dishes as she organizes an online auction. She sorts the donated items, which are stacked near the back of White Rock Fire Station #2, near highways 90 and E. As the other firefighters meet and cover Firefighter I certification materials, Bowman quickly works to market the goods to raise money.

Bowman, who is the wife of White Rock Fire Chief Jason Bowman, is a volunteer firefighter and a behind-the-scenes organizer. Hard work is a way of life for her. Her father, Dawayne Lasiter, served as Pineville mayor, the first fire chief in Neosho, and the state fire marshal. His fire career spanned almost four decades.

"I grew up as a firefighter's daughter," she said. "I've literally grown up with it my whole life."

Bowman has carved out her own career, serving as a 911 dispatcher for the City of Neosho, before joining the Bella Vista Police Department as a Criminal Investigation Department administrative assistant. Bowman is in her 16th year there.

In her "downtime," she utilizes her organizational skills to help the White Rock Fire Department's Booster Club, which raises critical funds.

Fire Chief Jason Bowman said Amber's experience and ambition tremendously benefit the department. "Amber has seen the needs of the firefighters and the district. She has always had the desire to help those around her and in her community," he said. "She grew up in the fire service watching and learning from her father and the guys at his department. This has helped her understand the needs of our firefighters."

The White Rock Fire Department primarily relies on tax funds as its base. In April 2019, voters approved the establishment of a fire protection district. Approval of the measure now enables officials to levy a tax millage increase of 30 cents per $100 assessed property value. Those funds provide an ongoing foundation for the fire department's annual budget.

Other needs still exist. Before a global pandemic affected fundraising, the Booster Club hosted a dinner, dance and auction at Mustang Alley in Jane to raise needed funds. As covid-19 has impacted those large get-togethers, the club this year is hosting online auctions as its fundraising efforts. The Booster Club takes in donated goods, then organizes lots or packages of items to sell online, Bowman explains.

"We support our fire guys, then they can go out and better serve the community," she said. "These items are close to half-price. We want to offer a good deal."

From tools and rugs to copper pans, Thermos cups and camping chairs, Bowman is organizing no less than three online auctions.

Bowman also serves as a first-responder in the department and is currently studying for her Firefighter I certification. The on-call aspect of community work is challenging for her.

"I'm used to being the call taker, not the responder," she said.

The behind-the-scenes volunteer remains dedicated to community and cause.

As the department grows and adds volunteers to its rosters, Fire Chief Jason Bowman said it's important for all team members to pull together. Knowing the real dangers that firefighters face has provided her with a solid background of departmental needs, he said.

"She and the boosters have committed themselves to help raise money to fund the needs of the firefighters."

As she continues to work behind the scenes -- and go on calls -- Amber Bowman has proven she's a team player.

"She has shown a great desire to help her community and those that help protect it," he said.

For information about the auctions, reach out to Amber Lasiter Bowman on Facebook to join the online auction group.

Editor's Note: This feature is part of a series of White Rock volunteer firefighter profiles. The volunteer fire department in Jane, Mo., responds to emergencies and non-emergency calls within a 90-square mile area.