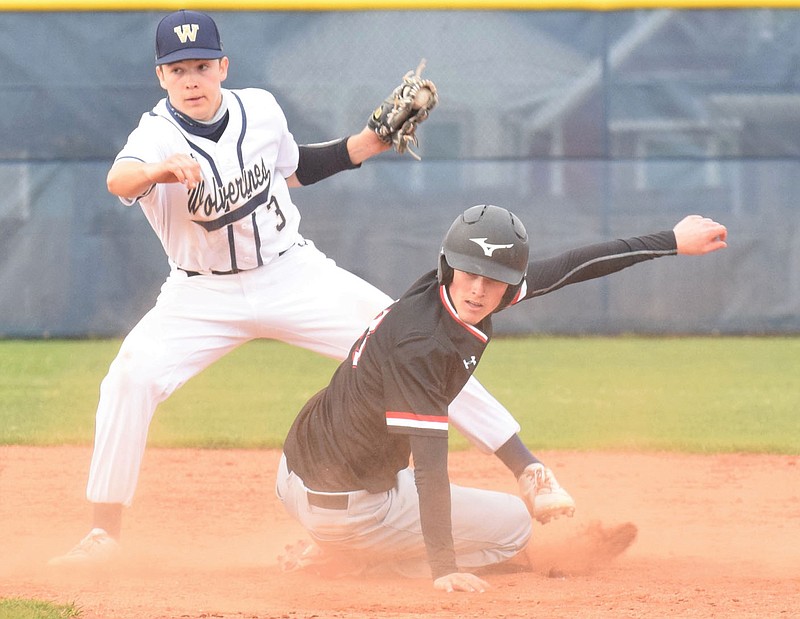 RICK PECK/SPECIAL TO MCDONALD COUNTY PRESS McDonald County's Wade Rickman is called out while attempting to steal second base during the Mustangs 5-1 loss to Bentonville West on March 24 at Bentonville West High School.

The McDonald County High School baseball team beat Springfield Central, 12-2, in the second game of a doubleheader on March 27, at Carl Junction High School to cap a week in which the Mustangs split their four games, including an extra-inning win over Neosho on March 23.

The big inning was keyed by doubles from Jack Parnell and Weston Gordon and singles by Cole Martin, Cross Dowd and Isaac Behm. The Mustangs also benefited from three walks and three Central errors in the inning.

Gordon got the win for the Mustangs, striking out five of the six hitters he faced in two innings of relief without allowing a baserunner.

"We did what we had to do," coach Kevin Burgi said. "It took us a while to get going, but we took care of business late in the game."

Levi Helm started for the Mustangs on the mound, allowing two runs on one hit, walking three and hitting one batter while striking out three in an inning and two-thirds. Rylee Boyd worked an inning and a third without allowing a hit, striking out the side in the third inning after getting out of a second-inning jam with a ground out.

Martin finished with three hits to lead the offense, while Behm, Dowd, Parnell, Gordon and Coty Dumond had one each.

In the opening game, Carl Junction's Alex Baker two-run homer in the fifth inning gave the Bulldogs a 5-3 win.

McDonald County took a 1-0 lead in the top of the first on a single by Martin and an RBI double by Destyn Dowd.

Carl Junction answered with a pair of runs in the bottom half of the inning to take a 2-1 lead before McDonald County took a 3-2 lead in the top of the second.

Gordon walked with one out before Martin tripled to tie the score. Destyn Dowd then singled to give McDonald County the lead.

Carl Junction tied the game in the fourth on two walks and a sacrifice fly, setting the stage for Baker's heroics in the fifth.

"Carl Junction is a good team," Burgi said. "We played well and competed. The game came down to one pitch. Ethan has been good for us in these situations, but every once in a while a guy is going to put a good swing on a ball."

McDonald County was led by Martin and Destyn Dowd with two hits each. Helm, Gordon and Ethan Lett added one hit each.

McDonald County is now 4-3 for the season heading into its home opener on March 30, against Carthage. The Mustangs then host West Plains and Joplin on April 3, beginning at 10 a.m.

McDonald County scored two runs in the sixth to tie and two more in the eighth for a 5-3 win over Neosho on March 23, at Neosho High School.

Parnell started the winning rally in the eighth when he got hit by a pitch to lead off the inning. Helm drove in the go-ahead run with a ground-rule double before scoring an insurance run on a wild pitch.

Martin's ground-rule double, Helm's walk, a sacrifice fly by Destyn Dowd and a passed ball led to the Mustangs scoring the tying runs in the sixth.

"This was a big win," Burgi said. "We don't know our districts yet, but we feel like Neosho has a pretty good chance of being in it. It was an exciting game and a good one for the kids. There are some things we need to do better, but when the kids grind out and find a way to win when they are not playing their best is a sign of a good team. Cross (Dowd) did a very good job on the mound and gave us six very good innings. Rylee Boyd came in and did a great job in a big spot. The situation wasn't too big for him. He looked like he was having a lot of fun out there."

Bentonville West scored three runs in the second inning to key the Wolverines to a 5-1 win.

Gordon worked the first three innings for the Mustangs, shutting out West in the first and third innings, but allowing three runs on four hits and a walk in the second.

McDonald County scored its only run in the fifth on Behm's leadoff single, a walk to Parnell and an error.

"In my opinion, the only thing we did well was throw strikes and somewhat dominate the routine plays," Burgi said. "We have to swing the bats better. We have to learn to handle adversity before we can overcome it. When we figure that out, we are going to be a very good team."

McDonald County was held to three hits, one each by Martin, Behm and Wade Rickman. 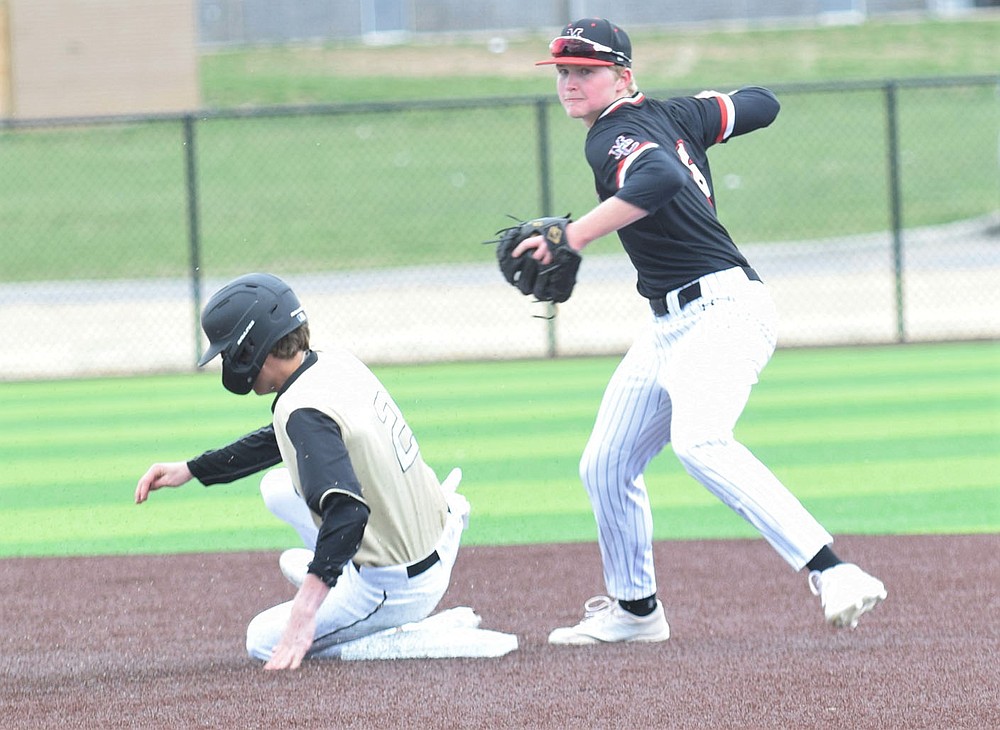 RICK PECK/SPECIAL TO MCDONALD COUNTY PRESS McDonald County second baseman Levi Helm forces out a Neosho runner before throwing to first to complete a double play in the Mustangs' 5-3 win over Neosho on March 23 at Neosho High School.
ADVERTISEMENT