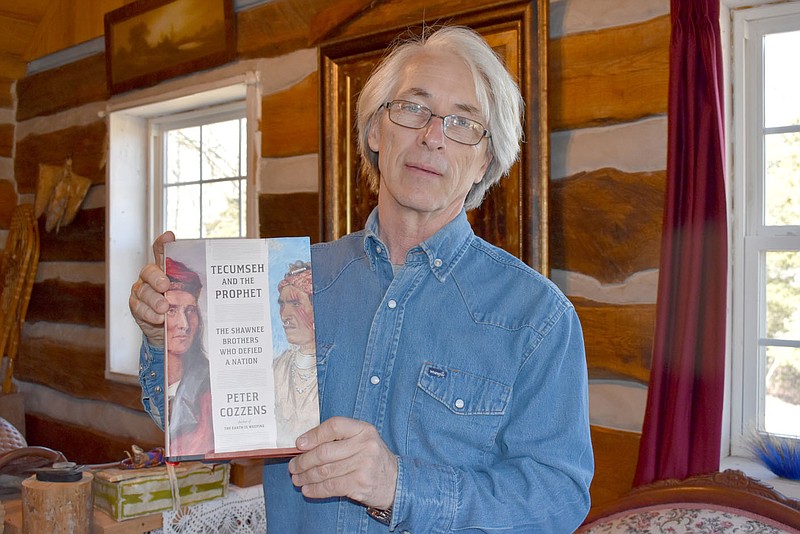 RACHEL DICKERSON/MCDONALD COUNTY PRESS Doug Hall of Pineville is pictured with the Peter Cozzens book "Tecumseh and the Prophet: The Shawnee Brothers Who Defied a Nation," which contains three of his paintings.

The nonfiction book by Peter Cozzens is called Tecumseh and the Prophet: The Shawnee Brothers Who Defied a Nation. It is about Tecumseh, an Eastern Shawnee chief, who traveled around trying to ban Indians together to fight against the colonials and send them back over the Appalachian Mountains, Hall said.

"The Indians were too fractured to come together to fight back, but he tried his whole life," he said. "There's lots of things in America named after Tecumseh."

Hall, who paints Eastern Woodland Indians from the French and Indian War period at his home in Pineville, said Cozzens called him up one day in September 2019 and introduced himself. Cozzens had known of Hall's paintings and wanted to use some in his book, and so Hall connected Cozzens with his publisher.

"That's the thing about being a painter ... you never know who looks at your work. To have someone like him call out of the blue and want to add the paintings to his book is pretty special," Hall said.

Cozzens sent Hall a signed copy of his book The Earth is Weeping: The Epic Story of the Indian Wars of the American West. Their plan was to meet at an event in 2020, but the event was canceled due to the covid-19 pandemic.

The three Hall paintings published in the book are Battle Ready, A Closer Look and Red Coat Shawnee Chief Tecumseh. Hall noted most of the images in the book are in black and white, but the art director wanted to publish his in color. He said Battle Ready was painted close to 20 years ago, and A Closer Look was painted probably within the last 10 years. The final painting, Red Coat Shawnee Chief Tecumseh, was painted most recently. It was auctioned off at the Buffalo Bill Museum in the last five to six years, he said.

Once Tecumseh and the Prophet: The Shawnee Brothers Who Defied a Nation was published, Cozzens sent Hall a signed copy of it.

"This book is printed in multiple languages," Hall said. "For a painter like me to be published in a book of that quality is something special. I'm proud of it."

They are now planning to meet in September in Cody, Wyo., at the Buffalo Bill Museum, where Hall will have a painting up for auction.

According to his website, Peter Cozzens is an international award-winning author or editor of 17 books on the American Civil War and the American West.