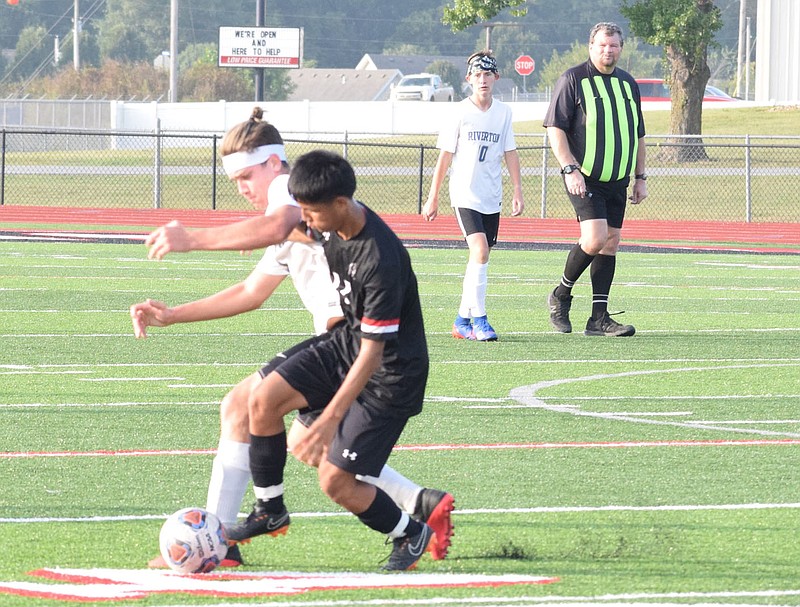 RICK PECK/SPECIAL TO MCDONALD COUNTY PRESS McDonald County's Saw Eh tries to make a pass while being defended by a Riverton player during the Mustangs' 4-2 win on Sept. 17 at MCHS.

The McDonald County High School soccer team rebounded from its first loss of the season earlier in the week with a 4-2 win over Riverton, Kan., on Sept. 17 at MCHS.

But Riverton rebounded to take a 2-1 lead at intermission on two goals by Kenzie Houser. The first came at 11:50 to go and the second came on a ricochet with a little less than 10 minutes before the half.

McDonald County tied the game with 29:36 left in the match on a goal by Estaban Martinez.

Karlo Barreda put McDonald County ahead with 8:34 left before Estrada added an insurance goal with 2:26 left.

"We finally got the JV some playing time and they did alright," said coach John Delatorree. "We were down 2-1 at halftime, but they played well. The varsity came in the second half and kept the ball on the ground and made some plays to score some goals."

On Sept. 15 at Aurora, McDonald County dropped a 2-1 decision for its first loss of the year after starting the season with five consecutive wins.

Alexis Pedrosa gave McDonald County a 1-0 halftime lead with a goal with 21 minutes left in the half.

But Aurora rallied for two second-half goals to pull out a 2-1 win.

"We played pretty well overall," Delatoree said. "In the first half, we had a lot of possessions. We have gotten a lot better at passing. In the second half, we got a little lazy and let them take control. We ended up giving up two goals, but it was still more positive than negative. It was a match we can build on. It was good facing some adversity because we have a tough stretch coming up."

McDonald County, 6-1 on the year, was at Springfield Catholic on Sept. 22 before returning home to face Carthage on Sept. 24. Kickoff is at 5 p.m.